Are You Buying Toxic Candles? 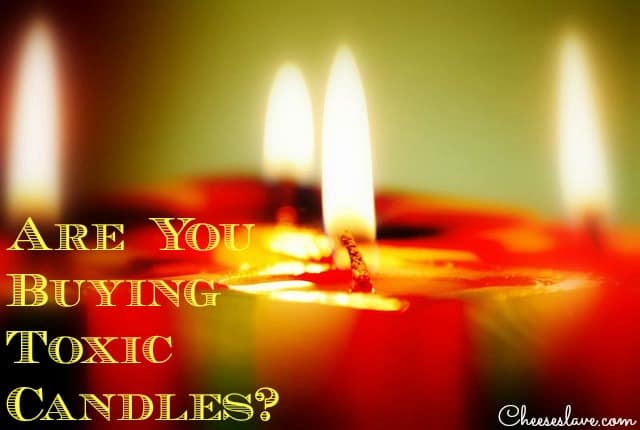 Kate and I were shopping at Whole Foods this afternoon and we came across some scented candles. I was looking at the ingredients. There were some that were soy candles scented with essential oils. The rest were “food-grade paraffin”.

I recently came across this post about how toxic candles are at the Nourishing Our Children blog. I always suspected that candles were bad for you, but I had no idea how bad.

Most candles are made from petroleum, which is of course a limited resource. Environmental issues aside, the burning of paraffin wax contaminates the air with soot and carcinogenic particulate matter.

According to the NY Daily News:

Scientists from the South Carolina State University in Orangeburg lit candles made of paraffin — the most common and inexpensive candle wax — in a specially-built chamber and found that the smoke emits doses of pollutants, including benzene, toluene and ketones, that have been linked to cancer, asthma and birth defects. (Source)

How are paraffin candles made?

Paraffin candles begin at the bottom of an oil barrel; in fact they start as the grayish-black sludge that has been rejected by the oil and gas industry.  This petroleum by-product is then bleached with 100% industrial strength bleach, creating toxic dioxins, and changing the colour to its pleasant whiteness (the bleach you use for laundry – even at full strength – is only at 10%).  Acrolyn, a known carcinogenic chemical, is then added to form the white sludge into solid white blocks.  Although the industry claims this substance is inert, once burned, paraffin releases carcinogenic toxins such as benzene and toluene into the air, where they loiter like a bad house guest.  Other chemicals are added to make paraffin burn a little longer and look a little prettier.  Paraffin blocks are then sold to companies who may add various other chemicals to texturize, artificial dyes for colour and/or synthetic fragrances to create those great candle smells. (Source)

If that isn’t enough, the candle industry uses metal core wicks to keep the wick standing straight while the surrounding wax melts.  These metal cores were initially made of lead and lead wick cores have the potential to generate indoor airborne lead concentrations of health concern.  In 1974 the US candle manufacturing industry recognized this potential health concern and voluntarily agreed to cease the production of lead contaminated candles (yay!).  However, lead wicks are still found in the market, especially in imported candles — so it is possible for the consumer to unknowingly purchase candles containing lead wick cores and repeatedly expose themselves to harmful amounts of lead through candle burning.  The EPA has stated that indoor air quality is 3 times more polluted than outdoor air quality and a 2000 study found that there is an increase in lead concentrations in our indoor air (Sobel et al., 2000b). (Source)

According to the Campaign for Safe Cosmetics, synthetic fragrance poses a number of different health hazards:

Allergens and sensitizers: One in every 50 people may suffer immune system damage from fragrance and become sensitized, according to the EU’s Scientific Committee on Cosmetic Products and Non-food Products. Once sensitized to an ingredient, a person can remain so for a lifetime, enduring allergic reactions with every subsequent exposure. Fragrances are considered to be among the top five known allergens and are known to both cause and trigger asthma attacks. Product tests conducted by the Campaign for Safe Cosmetics in 2010 revealed an average of 10 sensitizers in each fragrance tested.

Phthalates: This class of chemicals has been linked to hormone disruption, which can affect development and fertility. Although some phthalates are being phased out of cosmetics under consumer pressure, diethyl phthalate (DEP) is still used in many products, including fragrance. In 2010, the Campaign for Safe Cosmetics found DEP in 12 of 17 fragrance products tested for our report, “Not So Sexy.” Product tests conducted by Consumer Reports ShopSmart magazine in January 2007 found the phthalates DEP and DEHP (which is banned in Europe) in each of eight popular perfumes tested. DEP is a ubiquitous pollutant of the human body, found in 97 percent of Americans tested by the U.S. Centers for Disease Control and Prevention. Recent epidemiological studies have associated DEP with a range of health problems, including sperm damage in men. Most fragrances don’t list phthalates on the label, but hide them under the term, “fragrance.”

Neurotoxins: As far back as 1986, the U.S. National Academy of Sciences identified fragrance ingredients as one of six categories of neurotoxins (chemicals that are toxic to the brain) that should be thoroughly investigated for impacts on human health. However, this research has not been demanded or funded. The FDA has taken no action on a petition submitted to the agency in 1999 requesting fragrance components to be listed on labels.

Synthetic musks: A 2009 study of Austrian college students found that those who used the most perfume and scented lotion also had the highest levels of synthetic musks, including Galaxolide and Tonalide, in their blood. Research by the Environmental Working Group has even found synthetic musks in the umbilical cord blood of newborn U.S. infants. Preliminary research suggests that musks may disrupt hormones. Both Galaxolide and Tonalide can bind to and stimulate human estrogen receptors and have been shown to affect androgen and progesterone receptors. Tonalide has also been reported to increase the proliferation of estrogen-responsive human breast cancer cells. These musks have an environmental impact – they have been found to be toxic to aquatic life in numerous studies and can accumulate in the food chain. (Source)

Where to Find Non-Toxic Candles

The good news is, you can find safe candles. What you want is candles made from beeswax or soy. (Yes, this is a good use for soy!)

Some candles contain paraffin blends, so look for products that say 100% soy or 100% beeswax when you shop.

I ended up buying TruMelange Candles

at Whole Foods. They are 100% soy candles scented only with essential oils.

Another good choice is beeswax candles.

Diffusing essential oils is another good option. This way you can have the nice scents in your home without disease-causing synthetic fragrance. If you still want the ambiance from a candle-lit dinner, you can burn unscented beeswax or soy candles.

I am giving away a set of essential oils this week in my weekly drawing. Hurry! The giveaway ends tonight at midnight. Click here to enter.

Do You Buy Non-Toxic Candles?

What kind of candles do you buy? Do you use essential oils in the home? Share your thoughts and experiences in the comments. I always learn so much from you guys so I’m anxious to hear what you have to say!