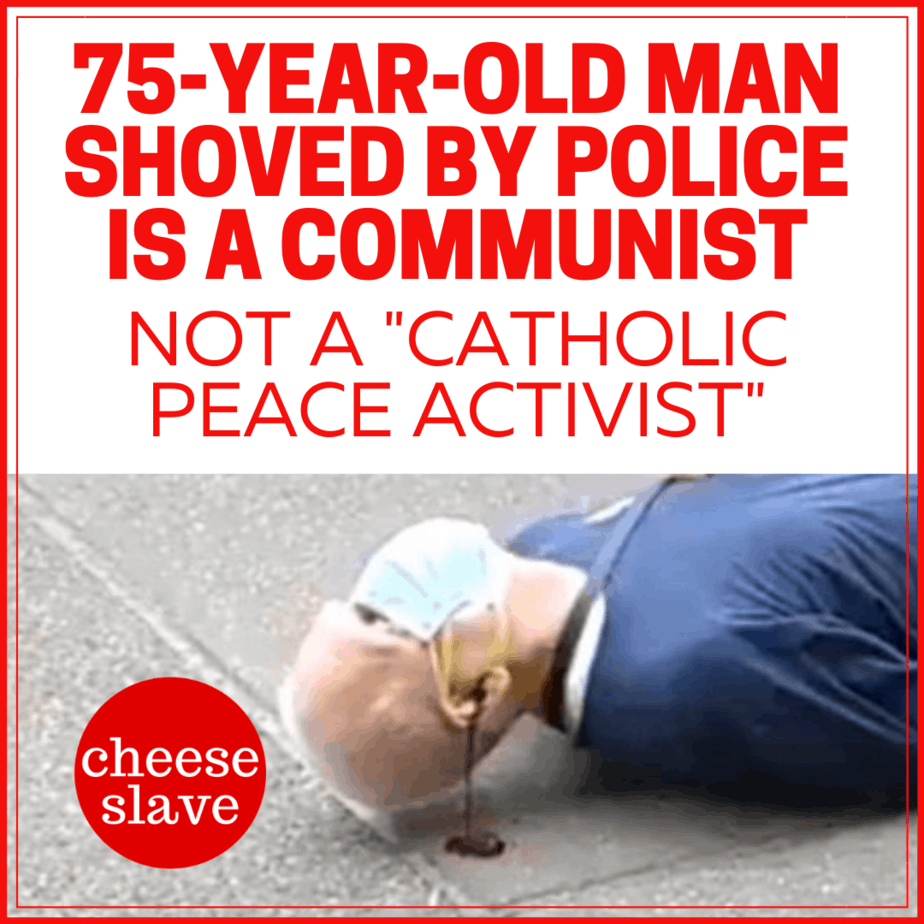 75-Year-Old Man Shoved By Police is a Communist, Not a “Catholic Peace Activist”

The fake-news “mockingbird” media has been pushing a story for the past few weeks that a 75-year-old man, Martin Gugino, in Buffalo, New York was shoved to the ground by the police and that he is now facing a brain injury.

Gugino he is clearly a communist activist who was working to overthrow our government. Although people are saying he is a “Catholic peace activist,” in this post, I lay out the evidence to show that he is actually a communist.

And for those who don’t understand why being a communist is a bad thing, I’ll explain that as well below…

75-Year-Old Man Shoved — Did He Fake His Injuries?

Twitter is ablaze with pictures of Martin Gugino, the 75-year-old Black Lives Matter protester who was allegedly “shoved” by police. But was he really shoved? Or did he fake it?

There is compelling evidence to show that he may have faked his injuries. Let’s take a look at what is being posted on social media.

Here is one of the Twitter threads — read the comments as well:

Also watch this video below… It does look like shoved, and that is wrong… However, it doesn’t look like he was shoved very hard.  And how would his head have hit the ground?

Look at how fast the blood started coming out of his ear. I’m not a medical expert, but this seems very sketchy.

And multiple people are saying it looks faked:

Whether it was faked or not, I don’t know. I’ll let you research it yourself. It looks very suspicious to me.

That said, as you will see in the rest of this post, the guy is super shady and clearly not a friend to our American government.

People on Twitter are sharing a video with evidence that Gugino was acting like an agitator prior to being shoved by police.

Watch this video and read the comments:

While we don’t know for sure whether Gugino faked his injuries, it’s clear that he is a communist, as you will see in the next section…

Now let’s look at the evidence that Martin Gugino is a communist. It’s very clear that he is, there isn’t even any question.

Before I get to the smoking gun, let me first show you something I found on his blog.

Actually he has several blogs as you can see on his Blogger profile.  Including a blog about his being arrested in front of the White House in 2013. But this is from his biggest blog, called Persistent Vegetative State.

Translation in Spanish: “The people, united.”

The caption beneath the photo reads, “Cuba will never be defeated.”

I’ve heard this as a chant at left-wing political protests here in the United States, “The people, united, will never be divided.”

If you search it, it is in fact, a communist term from South America and Europe (Portugal) from the 1970s:

The next thing I did was upload this image to Tin Eye, a reverse image search tool.

My search revealed that this is an original image. In other words, it doesn’t appear anywhere else on the web.

Now that is extremely interesting. Did Martin Gugino take this photo himself? If so, what was he doing in Cuba, a communist country?

I searched on Google and found out that the girl’s uniforms are, in fact, school uniforms in Communist Cuba.

“Al Hombro” on the T-shirts?

The people in the photo have on t-shirts that read “al hombro”.

I can’t see the first part of what it says on the the t-shirts because it is covered up. But there is an image of a star (which is a communist symbol)… so I’m wondering if perhaps the t-shirts say “Estrella al Hombro”.

I searched “estrella al hombro” online and didn’t find much… but I did find a book on an Argentinian bookstore website.

The book is called “Mapa con La Estrella al Hombro”.  Translation: “Map with the Star on the Shoulder”.

Also you can see on the website description above, it says “Rusia Mapa”. Translation: Map of Russia.

Well, what do you know… that’s a map of the USSR.

There are a few pictures of the book on the bookstore website, and from these it looks to be a book written by USSR officials, translated to Spanish.

The Table of Contents lists one of the chapters as “El Partido Comunista”. Translation: “The Communist Party”.

Symbolism will be their downfall. Q

Here’s the smoking gun that Martin Gugino is a communist.

Instead, they say, he’s a “Catholic peace activist”.

Even the Catholic News Agency is publishing this crap, saying he was peaceful and non-violent. As a Catholic myself, this annoys me.

According to Inside Edition:

“That the retiree would publicly condemn racism and police brutality was no surprise to those who knew him, as Gugino is a member of the Western New York Peace Center and the Catholic Worker Movement, which was founded by Dorothy Day and is devoted to protesting “injustice, war, racism, and violence of all forms.”

The key part of that quote is bolded: “Gugino is a member of the Western New York Peace Center and the Catholic Worker Movement, which was founded by Dorothy Day.”

You can look up the Catholic Worker Movement on Wikipedia. It was founded by Dorothy Day, and you can look her up, too.

Sounds harmless enough, unless you know the language of communism like I do.

And, it’s right here on her Wikipedia page… here she is in The Catholic Worker, praising Marx, Lenin and Mao Tse-Tung:

“In the Catholic Worker in May 1951, Day wrote that Marx, Lenin, and Mao Tse-Tung “were animated by the love of brother and this we must believe though their ends meant the seizure of power, and the building of mighty armies, the compulsion of concentration camps, the forced labor and torture and killing of tens of thousands, even millions.”

She used them as examples because she insisted that the belief that “all men are brothers” required the Catholic to find the humanity in everyone without exception.”

Yes, that is what she said. She is justifying “the seizure of power, and the building of mighty armies, the compulsion of concentration camps, the forced labor and torture and killing of tens of thousands, even millions.”

Hmm… like the concentration camps in communist China literally as we speak?

So this is what Dorothy Day supported. And Dorothy Day is one of the founders of the “peaceful” Catholic Worker Movement.

Okay, so if I haven’t made it abundantly clear… Communism is bad.

But because I know people will challenge me on this… I have to add this last section.

Go research it yourself — here is the link: Mass killings under communist regimes on Wikipedia.

Communism is not peaceful. Never had been. Over 100 million people died at the hands of communism in the past century.

So yeah, calling Martin Gugino, a member of the Catholic Worker movement, a “peaceful activist” is a big fat lie. If Gugino supports this movement, and we know that he does, he supports violence and he supports genocide.

I recommend a couple of books to get you up to speed quickly on the horrifying history of communism:

The Politically Incorrect Guide to Communism by Paul Kengor

These two books filled in all the gaps for me and I highly recommend them.

Both are easy to read and are available on audiobook as well (that’s how I read so fast — I listen to books while I’m doing other things).