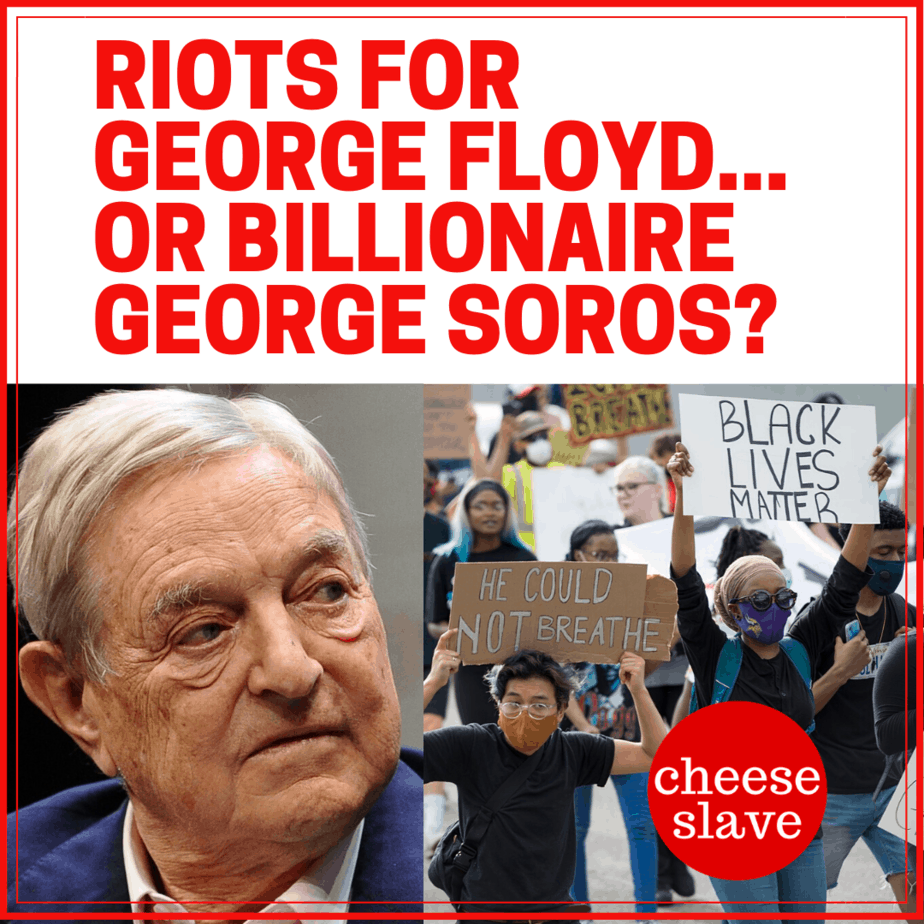 Are the George Floyd riots tearing our nation apart right now funded by billionaire George Soros? Some people say this is just a “conspiracy theory,” but I have the facts to prove it.

While the fake news media tries to convince us that George Soros has nothing to do with these riots, some of us know the truth. In this post, I’ll walk you through it.

While riots rage across our country in the aftermath of the death of George Floyd, some people are pointing out that the riots are being funded by billionaire George Soros.

Conservative commentator Candace Owens was one of the first to tweet about this:

And yes, Candace Owens is black, conservative, and  Trump supporter.

The Fake News & Their Lies About George Soros

When you search for “riots george soros” on Google,  you get a bunch of sleight-of-hand articles from the mainstream media (90% of the press is owned by 6 companies) that want you to believe George Soros has nothing to do with these riots.

Whenever I see a “wall of narrative” like this, I’m immediately suspicious.

The fake news pushers at Politifact assure us,  “No, George Soros and his foundations do not pay people to protest.”

“We didn’t find any evidence that the foundation has given money directly to the Black Lives Matter movement. The most recent connection they have with the organization is their 2018 grant of $279,860 to Release Leads, a UK organization that mostly focuses on international drug use education and policy reform, but also organizes public speaking events that feature the Black Lives Matter movement in the UK.” (Source)

If you reread that again, you’ll see the key word designed to trick you: DIRECTLY.

“We didn’t find any evidence that the foundation has given money directly to the Black Lives Matter movement.“

Of course not, because the billionaire Deep State swamp creatures don’t give their money directly to fund terrorists. They do it very covertly.

Check out who funds Black Lives Matter on InfluenceWatch:

On the InfluenceWatch page for the terrorist group, Antifa, they don’t list funding, because they say Antifa is an umbrella term for a lot of different groups.

However they work very closely with Black Lives Matter and other communist/socialist groups:

While the fake news media likes to pretend that Antifa is an “alt-right” group, that’s ridiculous.

Go look at their Wikipedia page — they are clearly leftists.

And curiously, their logo looks suspiciously like the logo of the Communist party of Germany, Antifaschistische Aktion.

Open Society Foundations, Tides Foundation and Borealis Philanthropy are all funded by George Soros and his billionaire buddies.

According to the George Soros page on Wikipedia:

“As of February 2018, he had a net worth of $8 billion, having donated more than $32 billion to his philanthropic agency, the Open Society Foundations.[13]

And the Tides Foundation page on Wikipedia:

“Tides has received at least $3.5 million from financier and political activist George Soros.“

All three of these organizations are also supported by other billionaires who have a vested interest in controlling the money supply, which I’ll explain below…

But before I do… you have to see this…

All you have to do is search “Politifact funding” to find out the truth on this organization. Politifact, it turns out, is funded by none other than George Soros himself.

But it’s true… here are the largest funders of PolitiFAKE in 2018 and 2019, according to InfluenceWatch:

This is How They Trick Us

See, this is how they trick us. They fund foundations and think tanks, which then in turn fund the terror organizations like Black Lives Matter and Antifa.

So… bizarre as it may sound, the truth is, George Soros actually funds Black Lives Matter and the other terrorist groups that are rioting and destroying our country right now… but he also funds the fake news fact checkers that are telling us he doesn’t fund them.

This is nothing new. They’ve been doing this for decades. For example, most people aren’t aware that Gloria Steinem was a CIA operative.

Black Lives Matter is just the new Black Panthers, which was a communist terrorist group.

So Who Is George Soros?

Billionaire George Soros is one of the richest people in the world. He  who made his fortune by breaking the bank of England back in the mid-90s.

A “bankster” (banker + gangster) who loves to divide people and create chaos so he can steal their money.

Will the Real Nazi Please Stand Up?

Everyone is calling President Trump a Nazi on Twitter today (#TrumpNazi is trending), which is utterly ridiculous and insane.

It’s absurd because George Soros is an actual Nazi; he admitted it on 60 Minutes.

At around 3:30 in the video below, you can watch Soros admit that although he was a Jewish man, he evaded the Nazis during the Holocaust by posing as a Christian, and then went on to help the Nazis round up his friends and neighbors into concentration camps:

The truth is, President Trump is calling the Deep State out for the terrorists that they are. If you don’t believe they are Nazis, read up on Operation Paperclip.

These monsters infiltrated have infiltrated our government at the highest levels. And it has been their goal to destroy us.

But that’s not gonna happen! I promise to post soon about the global financial reset that is coming — and why ol’ Georgie Boy ain’t gonna win this one.

Guys, I’ve barely scratched the surface in this post. There is so much to cover.

Stay tuned for an upcoming post on all the fishy things connected to the George Floyd riots… from mysterious pallets of bricks appearing all over the country to George Floyd’s suspicious background in adult videos, to the odd coincidences with Derek Chauvin…  and much more.

I’m working on an upcoming post about Elon Musk, SpaceX and the NASA launch.