Are Polio and Whooping Cough Caused By Pesticides? 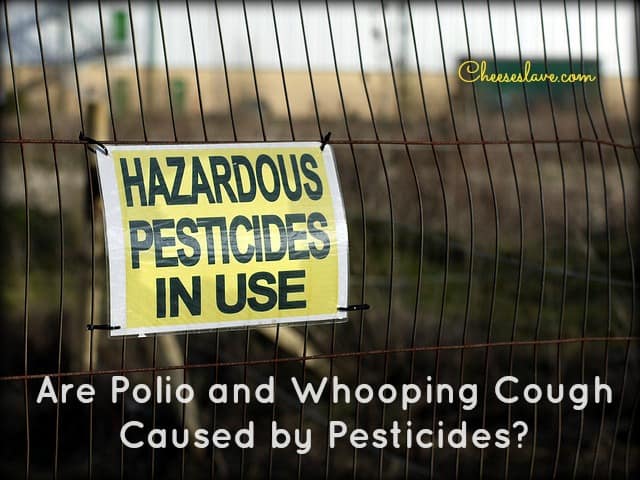 Vaccine advocates love to point out that the recent trend in not vaccinating is responsible for causing outbreaks of deadly diseases like polio and whooping cough (pertussis).

But could there be something else at play? Like pesticides?

Compelling evidence seems to suggest that there is a correlation between the spraying of pesticides and the outbreak of diseases such as polio and pertussis.

A suggested correlation exists when you look at the data that compares pesticide use during World War II in the 1950s and the polio epidemic that occurred simultaneously. Generally, as pesticides were used were often and became widespread, the incidences of polio increased.

It’s routinely denied, however, that poisons that were in heavy use during this period such as DDT, malathion, TEPP, heptachlor and others have any causal connection with the outbreak of polio.

However, studies as early as 1966 have shown that hosts who are exposed in the chemicals used to spray pesticides have increased numbers of viral infections. (source)

Check out this graph showing the correlation between spraying of pesticides and polio:

“As it is recognized that residues of some agricultural insecticides persist in the body and that cells are continuously exposed to their metabolites, we investigated the possibility that these chemicals may alter certain physiological activities of cells and subsequently influence the susceptibility of hosts to virus infections.”

It’s also very interesting to notice from the graph above the suggested strong correlation between an increase in the use of pesticides such as DDT, dieldrin, heptachlor and related chemicals and the worst polio epidemic to occur in the history of the United States.

The history is compelling. Incidences of polio dropped radically before the vaccine was introduced in they years ranging from 1953 to 1957. The vaccine, introduced in 1957, was not licenced until 1962. [source]

Graphs for whooping cough show a surprisingly similar trend, as well as for other major diseases. The notion that vaccines cured pertussis (whooping cough) or polio doesn’t follow from the facts. These major diseases were declining before vaccines were introduced.

Recently, we have started to see outbreaks of these diseases (whooping cough, measles, polio, etc.) and they are most commonly occurring (a) among vaccinated children (b) in agricultural areas and (c) during the summer when pesticides are sprayed.

According to Jim West: