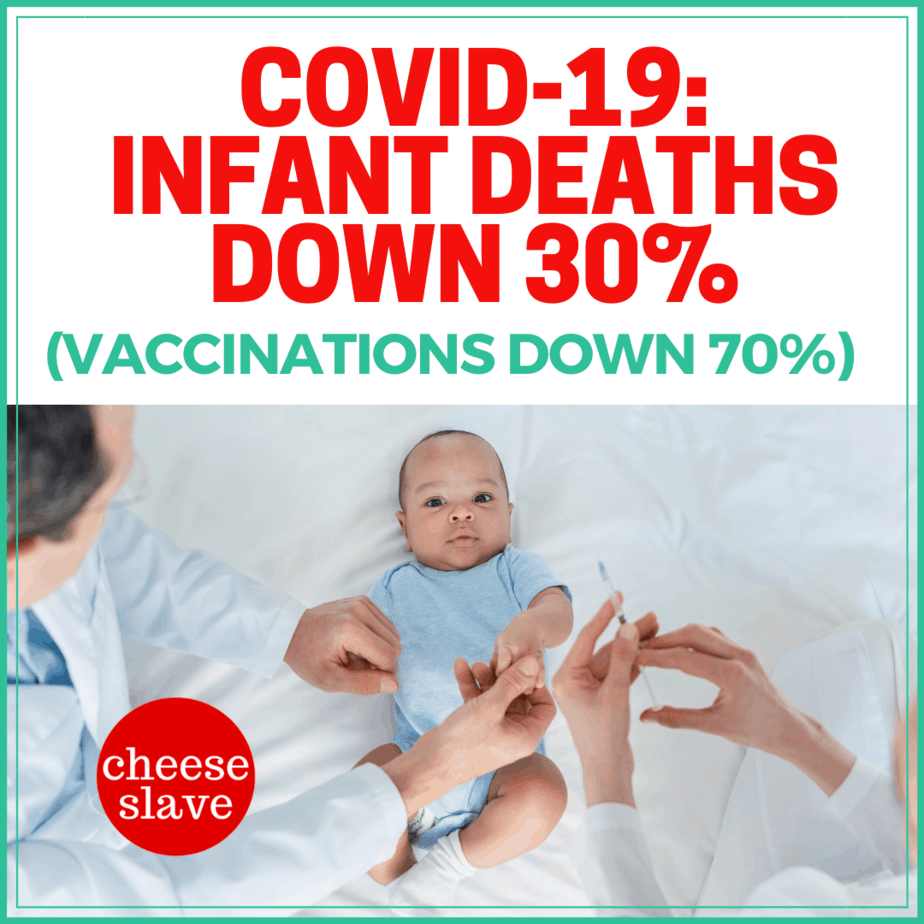 Is COVID-19 curing SIDS? A new study shows infant deaths have dropped by 30% since the COVID-19 crisis began. And according to the CDC, infant vaccination rates have fallen by 70%. Coincidence?

According to new data in a report called Lessons from the Lockdown:

“…the pandemic experience has brought on a surprising effect on this expected death rate among children. Starting in early March, expected deaths began a sharp decline, from an expected level of around 700 deaths per week to well under 500 by mid-April and throughout May. (1)  As untimely deaths spiked among the elderly in Manhattan nursing homes and in similar settings all over the country, something mysterious was saving the lives of children. As springtime in America came along with massive disruptions in family life amid near-universal lockdowns, roughly 30% fewer children died.”

The report goes on to say:

“When infants die, the cause is frequently some form of congenital condition or birth defect. Sadly, accidents and homicides are frequent causes as well. There are however, frequent cases in which previously healthy infants die unexpectedly.

These deaths are usually classified as “Sudden Infant Death Syndrome” or SIDS.  According to the CDC, SIDS deaths are one of the two largest causes of death among infants aged 1 month to 1 year. (7)

We have no specific data on the trend in SIDS deaths during the pandemic. We have, however, heard anecdotal reports from emergency room (ER) doctors suggesting some have observed a decline in SIDS. One doctor who says he might see 3 cases of SIDS in a typical week has seen zero cases since the pandemic and associated lockdowns began.

What has changed during this period that might have such an effect? Are infant deaths not being recorded? Are parents taking better care of their families while working remotely and their children are not going to school? There are many possible hypotheses about the infant death decline.

One very clear change that has received publicity is that public health officials are bemoaning the sharp decline in infant vaccinations as parents are not taking their infants into pediatric offices for their regular well-baby checks.

In the May 15 issue of the CDC Morbidity and Mortality Weekly Report (MMWR), a group of authors from the CDC and Kaiser Permanente reported a sharp decline in provider orders for vaccines as well as a decline in pediatric vaccine doses administered. (8) These declines began in early March, around the time infant deaths began declining.”