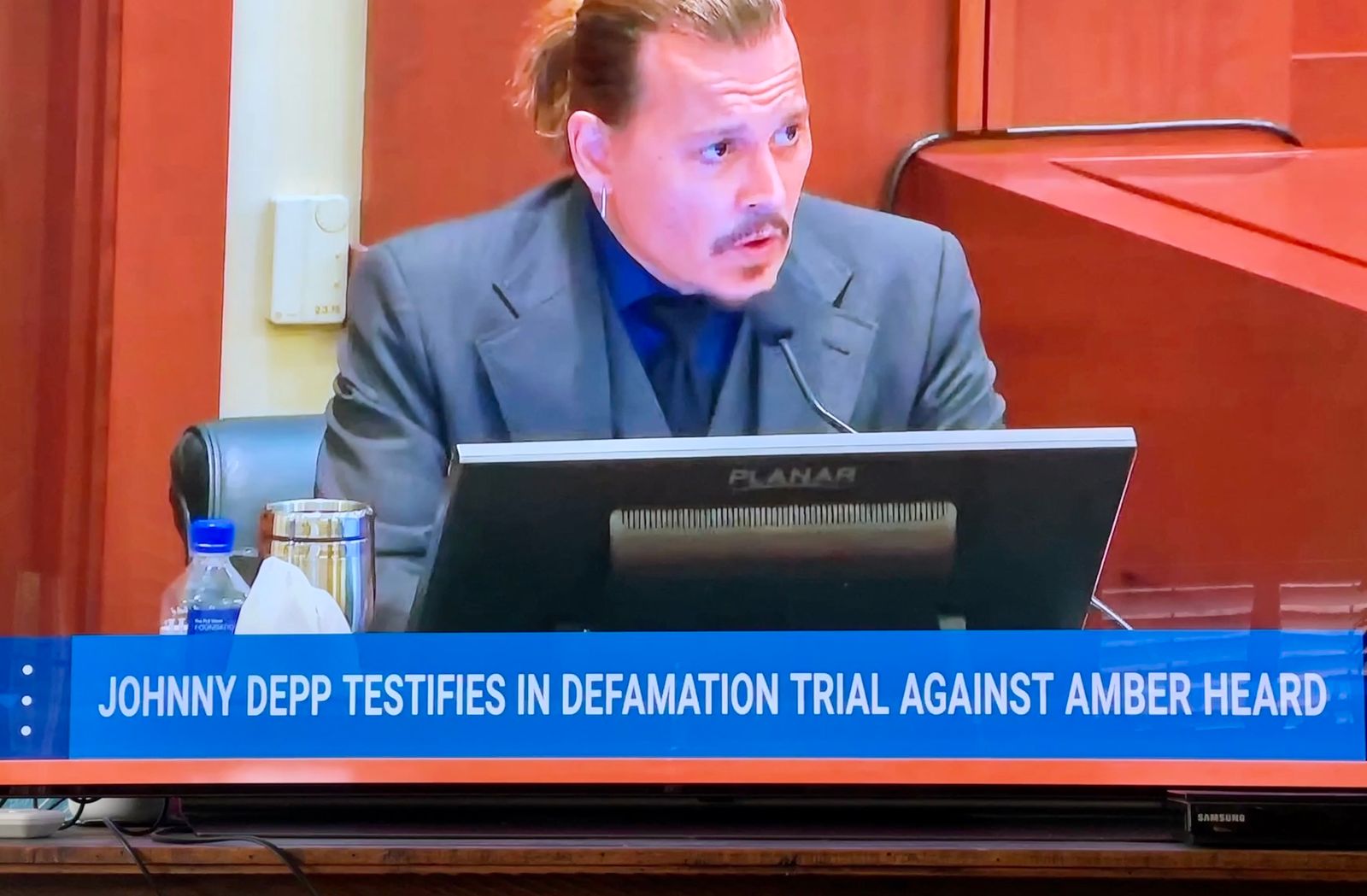 Eyes On The Johnny Depp Trial

I started watching the Johnny Depp trial yesterday and now I'm going down rabbit holes I can't get out of. Help! I've fallen and I can't get up!

In this post I'll talk about why I am so fascinated by this trial and uncover some of the connections that many people may not be aware of.

Why I'm Obsessed With This Trial

I don't usually write about celebrity news.  I wasn't even following the Johnny Depp trial until yesterday.

I am fascinated by this trial for three reasons:

1) After watching Johnny Depp's testimony on day one (yesterday,) I became very interested in the trial because I believe Depp is telling the truth. This is based on my intuition, my analysis of his microexpressions, and also based on the evidence so far.

2) Amber Heard has deep ties to the ACLU. The ACLU has long and well-documented ties to communism, actually since their inception, which I will elaborate on below.

3) Elon Musk was involved with Amber Heard after her divorce to Depp. I've had my eyes on Musk since 2020 when I researched him, concluded that he was a patriot, and wrote the post, Rocket's Red Glare: Why We Need Space Force.

Okay, let's get into it.

Who Is Suing Whom?

But before I do, let me explain what it's about, for those who haven't been following..

Johnny Depp, the Pirates of the Caribbean star, is suing his ex-wife, Amber Heard for defamation in a $50 million lawsuit over a 2018 Washington Post op-ed she wrote about domestic abuse.

Heard is countersuing for $100 million for nuisance.

This follows a protracted multi-year legal battle between Depp and Heard. You can go to Google or your search engine of choice and read up on that.

Okay, that covered, let's move on to what I find interesting about this trial...

A Moving Testimony From Johnny Depp

I was very moved by Johnny Depp's testimony yesterday. He came across as authentic and honest.

He spoke very truthfully about his childhood and how he was beaten and abused. I didn't see any incongruence in his face when he was talking.

If you haven't watched the TV show, Lie To Me, you gotta check it out. It really helps you learn how to tell when people are lying.

It's all in the microexpressions, which are flashes of emotions that show up on the face when someone is lying. This is based on the work of Paul Ekman.

Like I said, I wasn't even following anything about Johnny Depp and his legal problems with Amber Heard but after happening upon his testimony yesterday, I was really blown away at his honesty and authenticity. It was so apparent to me that he was telling the truth.

Okay, let's move on to Amber Heard and her sketchy ties to ACLU... First of all, we need to talk about Amber's lies about the charities she said she donated to.

In Depp's testimony on Wednesday, he said his ex-wife, Amber Heard got $7 million in the divorce settlement. He said she told him that she was going to give all of the money from the settlement away to charity.

She said she was going to give it all to the ACLU and the Children's Hospital of Los Angeles. (Source)

But then yesterday on the stand, Depp questioned whether she ever gave the money to charity, or if she just lied about it. In fact, he said he decided to start sending the payments to the charities directly, and she found out he was doing that, she became enraged.

Here's an article about this from the Daily Mail. As you can see in that article, the Children's Hospital of Los Angeles only got one payment of $100,000 from Amber Heard, not the $3.5 million that they were promised.

According to the Daily Mail article, the ACLU "has so far refused to cooperate with multiple subpoenas" so they don't know how much Amber Heard gave them.

Amber Heard's Ties to the ACLU

In fact, Amber Heard is one of their ambassadors.

According to their 2013 press release announcing the launch, "...the ACLU Ambassador Project, a new initiative that joins personalities from the worlds of film, television, music and comedy with ACLU priority issues." (Source)

In her 2018 WaPo op-ed, the one in which she alleges abuse that took place in 2016, which was during the time she was married to Johnny Depp, there is a clear notice at the top of the article stating that she is an ACLU ambassador.

I am not sure if these actors get paid as ambassadors, but in my world (blogging and online influencer), ambassadors do get paid.

The ACLU Is a Communist Front Group

There is a ton of evidence that the ACLU is a communist front group. You can use any search engine to find out the truth.

Here are just a few articles I found with a cursory search proving that the ACLU has been a communist group from its inception:

I first read about the ACLU's communist ties in Paul Kengor's book, The Communist.

This is one of the best books I've ever read on communism, or anything for that matter. Paul Kengor is a very skilled researcher and a great writer.

It was in this book that Kengor outlines how the ACLU has been working behind the scenes to sway public opinion with highly-publicized court cases.

Including the Scopes Monkey Trials. You'll have to read the book.

He goes into great detail about how communists founded and ran the organization, and how they were behind the deceitful charade that was known as the Scopes Monkey Trials, which was just a successful attempt to take God out of our schools.

In fact, it was because I was taught about evolution in public school that I quit believing in the Catholic Church when I was 7 years old.

Elon Musk dated Amber after her divorce. But wait, there's more. Apparently there is evidence that Elon and Amber had a relationship while she was still married to Depp.

If Depp and his lawyers can prove this in court, that would render Elon's pro-Amber testimony useless, because it will expose that he lied.

Watch this short video that explains the situation with Amber and Elon:

If you watch that video, you'll see they also say there's a chance Amber Heard's daughter could be Elon's. Here's another article about that.

So if Elon testifies, it will be very interesting to say the least. I am a bit confused by this part of the story because Heard says she used a surrogate, so I'm not sure how that connects to Musk.

Unless she used his sperm? I don't know. I guess we'll find out soon.

Again, based on my in-depth research on Elon Musk, I believe he is a patriot. So I suppose their could be some sort of infiltration going on here.  Read my post, Rocket's Red Glare: Why We Need Space Force.

Of course, I could be wrong. And, as you know if you have followed me for a while, I am always open to being wrong. If I'm wrong, I admit it.

So we'll wait and see how this plays out with Elon.

I can't even do a conclusion yet because here it is Friday (I started writing this post yesterday) and I am finding a ton more information proving that Amber Heard is a liar.

Stories like this one from the Daily Mail: Amber Heard claims Johnny Depp gave her 'two black eyes' day before she posed for selfies on the Late, Late Show with James Corden - but make-up artist who styled her on set says she didn't see a single injury

And she faked the whole story about the compact she used. Watch the TikTok I just made – a duet with Milani Cosmetics.

Amber Heard testified that she carried that compact the whole time she was in the relationship with him, to cover her bruises. But according to Milani Cosmetics that compact was not released until 2017.

I also made this TikTok this morning, which made me cry. It is disgusting what she did to him. He wasn't perfect. He was an addict. But what kind of monster would do this to someone who is trying to get off drugs?

I think Johnny Depp is a good guy and he is innocent. Amber Heard is the abuser. I think she set him up and used him.

I also wonder if Amber Heard is being paid by the ACLU. I don't have proof of that, but the whole ambassadorship thing is fishy.

How To Watch The Johnny Depp Trial Live

You don't want to miss this trial. I don't think it was on today but it should be back in session on Monday, April 25.

You can find it on YouTube. Here's one stream, but there are lots of them:

I'm streaming YouTube to my big screen TV in the living room.