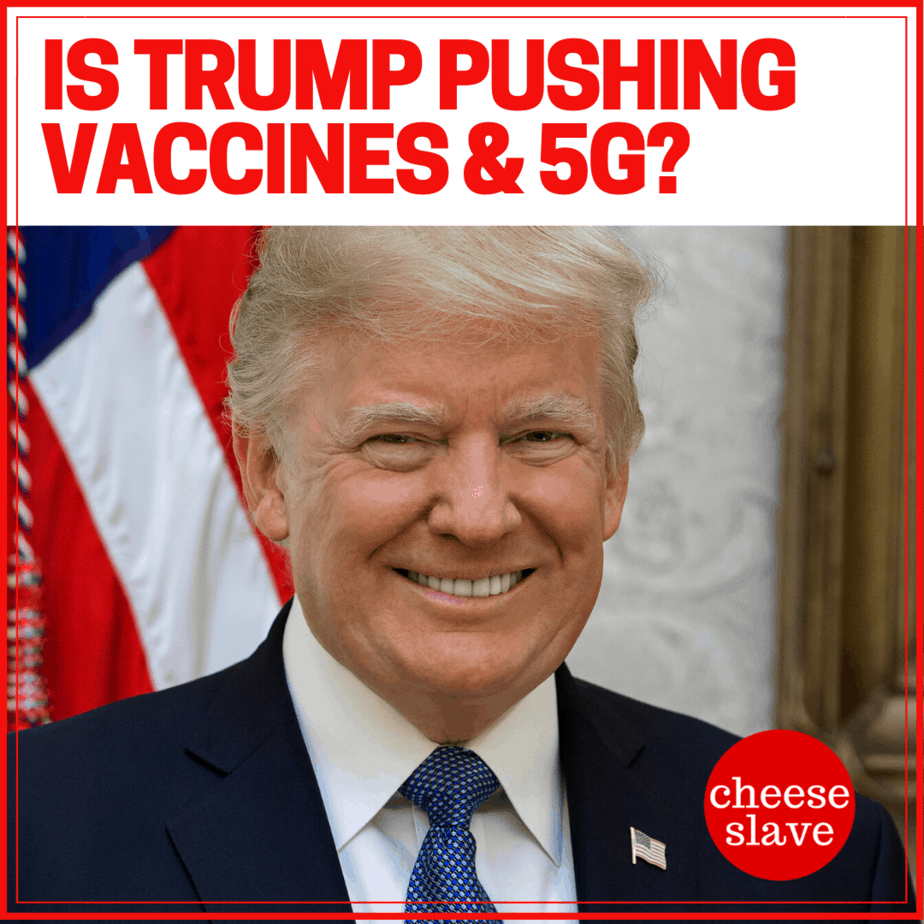 Is President Trump pushing mandatory vaccines and 5G on the American people? Vaccines and a 5G rollout are two of the hottest topics in the health community these days.

Naturally we need to be skeptical and informed about what is going on. In this post, I’ll share with you what I am seeing…

Back in 2016 during the election, I was like most people… I believed what the media was telling us about Trump. And then I researched. And I researched some more. And the more I dug, the more truth I found.

Actions speak louder than words. While many people out there have what we call TDS (Trump Derangement Syndrome), is it justified? If we look at the facts, what is President Trump actually doing?

The mainstream media does everything it can to tear down President Trump. But is he really working against the American people? Or is he actually on our side?

We Know The Media is Not On Our Side

Before I get into looking at what President Trump is up to in regards to vaccines and 5G… we need to remember one thing. The mainstream media is owned and controlled by the Deep State.

There are only 6 corporations that own 90% of the media. Scroll down to the bottom of this post to see the infographic.

Let’s just take a look at what President Trump has done over the past month and you decide if he is on our side or not.

President Trump announced that a vaccine is coming but it will be voluntary, not mandatory.

In a May 15 press briefing, he said, “No, we’re looking for a full vaccine for everyone that wants to get it.  Not everybody is going to want to get it.”

I will write a longer post about POTUS and his position on vaccines but for now I will say this: he has always been critical of vaccines and the pharmaceutical industry. Based on my in depth research, there is no way POTUS will push a mandatory vaccine.

Also, stay tuned — I also have a post coming soon about the vaccine rollout that will go into more detail. I have reason to believe that it is very good news… but I need to write a longer post to explain.

President Trump defunded the World Health Organization and said he wants to investigate them. This is a major coup!

The WHO Director, Tedros Adhanom, is a Marxist and known terrorist, which I covered in this post: Dr. Fauci’s Ties to Bill Gates & Communist China.

For that reason and many others, it is my opinion that the globalist WHO needs to be defunded shut down entirely. They are a menace to the entire world. I’ll write a longer piece on this soon.

A lot of people are confused about what’s going on with the roll out of 5G. I hear a lot of people who are scared about 5G. And believe me, I get it! I have spent a lot of time researching the dangers of EMF.

I will be writing a longer post on this in the near future, but in the meantime I will say that I think POTUS is, so far, doing good things.

First of all, Chinese companies are not privately owned.

Although China poses as a capitalist / free market country, and that’s what the media is is not a free market. They have a socialist economy, which means their companies are owned by the government.

“The socialist market economy (SME) is the economic system and model of economic development employed in the People’s Republic of China. The system is based on the predominance of public ownership and state-owned enterprises within a market economy.” (Wikipedia)

The truth is there are no private companies in China.

“In China, the ruling communist government is the absolute authority in the country. Though courts exist, the Chinese Communist Party (CCP) can easily override judgments in its favor. If Beijing asks a company operating in Shanghai to hand over data of American citizens it had collected through a smartphone app, then the business has no choice but to comply with the order. Non-compliance can lead to the business being shut down as retaliation by the government.” (Vision Times)

While you may think it’s not a bad thing for all the companies to be owned by a government, I ask you to read a few books on the real history of communism.

The two books I recommend the most are The Politically Incorrect Guide to Communism by Paul Kengor and The Naked Communist by Cleon Skousen. These two books were life-changing for me. Extremely well-researched, easy to read, not to mention entertaining. And really opened my eyes to the real history of communism, which most of us never learned in school.

Secondly, and this is really bad, Huawei is accused of installing “back doors” in their 5G technology to spy on citizens. Hence, a clear security threat.

What Will We Do for Broadband Internet?

So if we’re not using Huawei, will there still be 5G?

President Trump tweeted that yes, we will move forward:

It is not clear what exactly is planned. However, we know that there will be a plan in place within six months.

According to a March 23 law, Trump administration must produce 5G security strategy under new law.

Interestingly, the March 23 is called Secure 5G and Beyond.

You can read the full text of the Secure 5G and Beyond Act of 2020 law here.

Read the President’s statement on the law here.

Could This Involve SpaceX’s StarLink?

I’m working on a longer post about this but I think we will very likely see wireless broadband internet from Elon Musk’s StarLink.

Watch this video to learn more about StarLink and how it will work:

We know Nikola Tesla was working on an intercontinental wireless communication and power transmitter…  so I’m wondering if this could somehow be involved.

Here’s an excerpt from the book, Nikola Tesla’s Electricity Unplugged:

What does this have to do with Elon Musk & StarLink?

I don’t have any proof yet that Elon Musk is using Tesla’s technology. But it sure is interesting that he chose the name Tesla for his automobile company. Coincidence?

And if you know anything about Nikola Tesla, his work was stolen and suppressed by the Deep State.

Nikola Tesla was the real inventor of the lightbulb, radio waves, X-rays, and he figured out how to create free energy with his Wardenclyffe Tower. His patents were stolen from him and he died penniless. They wrote Tesla out of all the history books.

Also of note… John Trump is Donald Trump’s uncle. He had the missing files from Nikola Tesla.

Do you think it’s just a coincidence that Donald Trump is now president and his uncle had the Tesla files?

As Q says, How many coincidences before mathematically impossible?

And meanwhile… stuff like this is happening: Stanford Scientists Are Making Wireless Electricity Transmission a Reality.

And I’ll just leave you with this…  isn’t it interesting how much John Trump looks like Julian Assange?

Stay tuned for upcoming posts on vaccines and the future of broadband internet.

Got a question? Ask in the comments below.

Six Corporations Control 90% of the Media

Lastly, here’s the infographic showing how 6 corporations control 90% of the media.

This infographic created by Jason at Frugal Dad shows that almost all media comes from the same six sources.

That’s consolidated from 50 companies back in 1983.

NOTE: This infographic is from last year and is missing some key transactions. GE does not own NBC (or Comcast or any media) anymore. So that 6th company is now Comcast. And Time Warner doesn’t own AOL, so Huffington Post isn’t affiliated with them.

But the fact that a few companies own everything demonstrates “the illusion of choice,” Frugal Dad says. While some big sites, like Digg and Reddit aren’t owned by any of the corporations, Time Warner owns news sites read by millions of Americans every year.