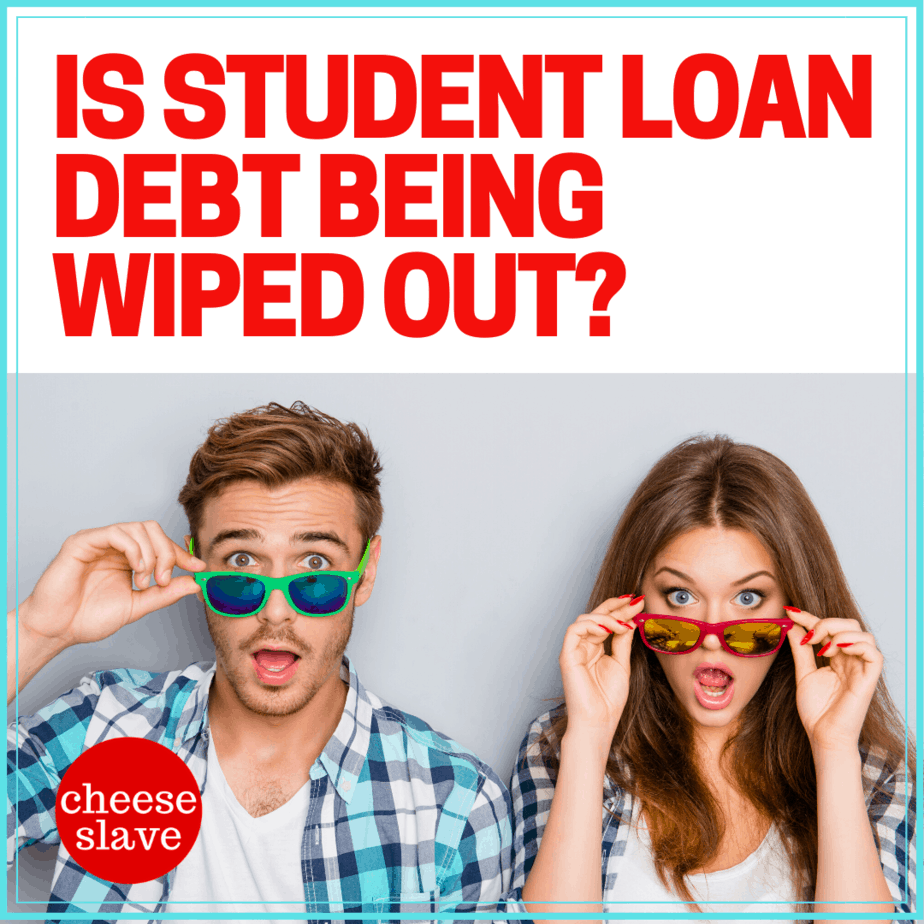 Is Student Loan Debt Being Wiped Out?

In this post I’m sharing reports from people finding their student loan debt is being cancelled or payments postponed. Is this part of President Trump’s effort to “Drain the Swamp”? Is this just a temporary thing… or maybe permanent?

I’ll be updating this as I get more reports. So far I have 4 but I’ve seen many more online. I’m only including reports from people I know — not just random people I can’t verify.

If you find that your student loan debt is forgiven, please comment on this thread or email me at annmarie@cheeseslave.com or message me on my Facebook page so I can share your story here. (It may take me a while to get back to you but I do reply as quickly as I can).

Is Student Loan Debt Being Wiped Out?

Before I get into sharing the I’m not sure what’s happening but I think this has something to do with a financial reset, the NESARA bill (also known as “Draining the Swamp”) and going back to the gold standard.

The History of the Federal Reserve & the Gold Standard

We’ve been in big economic trouble in America for over a century. Actually this goes back to President Lincoln and even President Jackson, but I’ll have to write a longer post with the full story.

What this means is since the dollar is not backed by gold, it’s what is known as “fiat currency”.  In other words, it has no intrinsic value.

What’s Wrong with the Fed and Fiat Currency?

So why is it a problem to have a privately owned banking system, controlled by a small number of men who are appointed, not elected?  And what is wrong with having a financial system that is not backed by gold?

I think the answer to the first question is pretty obvious. The golden rule: whoever has the gold makes the rules.

The answer to the second question is when currency is not backed by something that is tangible and real, it can be manipulated. And that is what we have seen over the past century — uncontrollable inflation, which means our money is worth less and less.

Because the monetary system is being artificially manipulated, our dollar is worth less than ever before. A dollar in 1913 is now worth .04.

In other words, the same dollar in 1913 is 26 times less valuable today. So our money is worth less.

The Federal Reserve is a Pyramid Scheme

Ever wonder why there’s a pyramid on the dollar bill? It’s because it’s a pyramid scheme.

What Does This Have to Do with President Trump & Q?

This financial reset is actually at the very core of the Q movement. As I show below, “Drain the Swamp” was the basis of the NESARA movement.

Watch this short video to get a basic understanding of how the elite has been controlling us, and how this connects to Q:

If you don’t know about Q yet, learn more with the baby steps for getting started on my Q Resources page.

Learn More About the History of Gold & Fiat Currency

To get a thorough understanding of why we need to go back to the gold standard, I recommend reading this book: Fake.  This book, written by one of my favorite financial advisors, Robert Kiyosaki, author of one of my all-time favorite books, bestseller Rich Dad, Poor Dad.

Fake is written in plain English and helps people understand why going back to the gold standard is critical if we want freedom. It’s one of the best books I have read in the past decade and I highly recommend it.

Finally, check out this link to NESARA. This was a bill proposing the end of the Federal Reserve and income tax, and ending usury. It’s a real bill, never enacted into law — I even checked on the Wayback Machine. It is based on a book called Draining the Swamp: Monetary and Fiscal Policy Reform  written in 1996 by someone named Harvey Francis Barnard.

I don’t know if any of this is true but it is very curious that a book about ending the Fed would be called the same thing that Donald Trump uses as his campaign slogan.

Also, interesting to note, Robert Kiyosaki and Donald Trump have a long history of friendship; they wrote 2 books together. The coauthors then wrote Why We Want You to be Rich together in 2006, and followed it up with Midas Touch in 2011. Kiyosaki also endorsed and supported Trump in the 2016 election.

Oh, and gee… I wonder why they called the book The Midas Touch?  The most famous King Midas is popularly remembered in Greek mythology for his ability to turn everything he touched into gold.

So What Could This All of This Mean for Americans?

If NESARA is real, and President Trump and Q (a group of government insider “good guys” or “white hats” — see the video above) really are draining the swamp, what it would mean is that Americans will be paid back what was stolen from them.

If the elites really have been robbing us blind for decades (and clearly they have), we could get restitution.  Most of us have put money into Social Security, which is now basically bankrupt, and we have spent vast sums on illegal income taxes.

If you research it, income tax was never part of our Constitution. Income tax was only added in 1909 as the 16th amendment, and it was only supposed to be temporary.

NESARA calls for a repeal of the 16th amendment, as does the Fair Tax Act, another proposal which calls for the complete dismantling of the IRS.

If we were to get paid back… would this be the same as getting socialist payments from the government?

No. Clearly President Trump is a YUGE proponent of capitalism and the free market. He’s already taken steps to reduce the size of the government and government spending.

But it could mean that we could get paid back some of the money the cabal stole from us.

Where would the money come from, you ask? From all the assets being seized. I’ve been seeing seizures literally on a daily basis on the DOJ website. You can go look for yourself.

Here’s a video I made recently about a recent asset seizure… the Department of Justice seized almost $1 billion in assets — the biggest forfeiture in DOJ history:

Before I get into the reports I’m getting from friends of their student loans being wiped out, check this out. There have been a slew of lawsuits against the different student loan companies in the past few years.

I used to get my student loan bills from Navient. Prior to that it was Sallie Mae.  I’m not sure when it changed but within the past few years, I started getting letters from Fed Loan Servicing instead of Navient. This is odd because the Navient website is still up and I never got any notice of the switch.

Not only that, but there was a class action lawsuit by teachers in 2018 that was settled in their favor:

“The lawsuit, which was filed in federal court in New York in October 2018 by members of the American Federation of Teachers, the second largest teachers union in the U.S., alleged that Navient systematically misdirected borrowers into student loan repayment and forbearance programs when they really should have been directed into the Public Service Loan Forgiveness program. As a result, the plaintiffs claim they missed out on payments that could have qualified them for public service loan forgiveness, which enables public servants to have their federal student loans forgiven after meeting certain requirements.”  (Source: Forbes)

Not only that, but Attorney Generals from several states have also sued Navient according to this article. And here is yet another lawsuit against Navient.

There are also reports of lawsuits against other student loan providers including Nelnet and others.

Also check this out… according to the Wikipedia page for the Pennsylvania Higher Education Assistance Agency, it is a “quasi-governmental agency that administers several State higher education student financial aid programs.”

Wikipedia goes on to say: “From a small student loan guarantor with approximately 5,000 student loans in 1964, it now manages more than $100 billion in total assets and serves nearly four million students through its various programs.”

And what is this: “In October, 2007, Jack Wagner, the Pennsylvania auditor-general released a report accusing the agency of giving excessive bonuses and incentives.”

Ugghh…the more I research, the more lawsuits and corruption I find.

What Is Going On?

So is all of this real? Is NESARA going to happen? Are we really going to end the fed, repeal the income tax, and maybe even get paid back something for all that was stolen from us? Nobody knows.

I need to dig into this further. The more I dig, the more I find…  I will continue to dig and try to understand what is happening.

And I will continue to report to you what I’m seeing. And what I am seeing is very interesting.

Reports of Student Loan Debt Being Cancelled and Postponed

I’ll start with a few that I saw online when the storm first started 2 months ago. I validated these by following up on the people’s Facebook page.  The rest I will be posting will be only from people who send them to me.

By the way, I’m also seeing reports of mortgage loan debt being wiped out, but I’ll start another post to document those.

This first one I saw on Facebook. I searched her page and it was real. It’s buried on Facebook now, but I friended her at the time and she confirmed.

This is one I saw on Facebook — I don’t know the person however he has his full name on Facebook.

Next, this is what happened to me back in March. I had been seeing a few people (nobody I knew) saying their student loans were cancelled as early as mid-March 2020 (when the storm started).

And then I opened my mail and saw a letter from the student loan company saying no payment was due. There was still a balance, but no payment due.

On the FedLoan Servicing website, it says they are temporarily reducing the interest rate to 0% and suspending payments — until September 30, 2020.

So yes, it’s very possible that my student loans are just on hold.

But let’s look at reports from others… People are saying their accounts are being closed and their credit scores are going up.

Again, we don’t know what is happening… but it sure is interesting given what we know about NESARA.

My friend, Nikki, texted me the other day on Facebook Messenger to tell me she had just checked her Credit Karma and all her student loan accounts were cancelled.

Another friend Caleb messaged me on Facebook to say his student loans are gone.

Caleb said his sister also checked and found her account was closed.

Please Send Me Your Reports

As I said above, I’ll be updating this post with reports coming in. Please send them to annmarie@cheeseslave.com or message me on Facebook. Just send me a screenshot with any personal information redacted. I will not share your name if you don’t want me to.