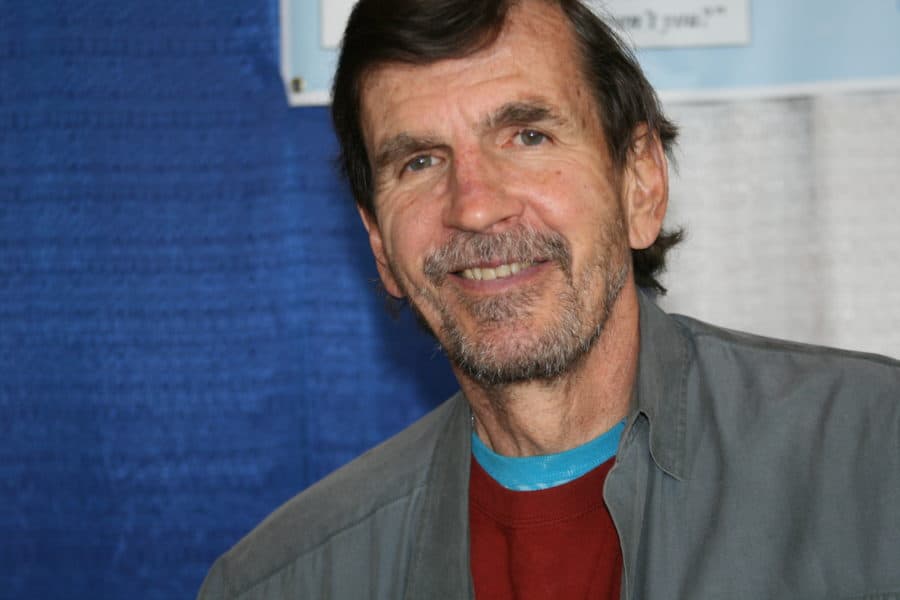 Two of my friends died last month. These were both guys who ate all organic food… we’re talking supremely healthy, nutrient-dense diets.

They died almost within a week of each other. Dr. Ron Schmid, naturopath and author, aged 71, died of heart failure on July 20th. Rami Nagel, author, aged 38, died of cancer just over a week later on July 28th. Both had one thing in common: they were taking a supplement called FCLO (fermented cod liver oil).

I met both Rami and Ron at the Weston A. Price Foundation conference, the first one I ever attended in 2008. I saw them both every year at the annual WAPF Wise Traditions Conference until I stopped attending in 2014.

Rami was only 30 when I took that photo. Ron was 63. Eight years later, they are both dead.

Dr. Kaayla Daniel sacrificed everything to expose FCLO as what she believes is a rancid, toxic oil in her whistleblower report published 2 years ago.

I’m grateful to both Kaayla and David for taking the time on their blogs to honor Dr. Ron. He was a good man who helped a lot of people. He was intelligent, caring, and a stellar researcher and writer. If you haven’t read it yet, I highly recommend picking up a copy of his book, [easyazon_link identifier=”0979209528″ locale=”US” tag=”cheeseslave0e-20″]The Untold Story of Milk[/easyazon_link].

I want to take a moment to thank both David Gumpert and Kaayla Daniel, for showing great integrity by honestly investigating and questioning the supplement both Rami and Ron consumed, fermented cod liver oil (FCLO).

There were a few other bloggers who honestly criticized and questioned FCLO, who posted about the whistleblower report and warned their readers about the possible danger. I can count those folks on one hand. I am grateful for everyone who contributed information about this very important topic.

Actually I need to give credit to Sarah at Nourished and Nurtured who was the very first blogger to sound an alarm about FCLO (two and a half years before Kaayla’s whistleblower report came out). This was the blog post she published in January, 2013.

I also want to give a special shout out to Jaclyn Harwell of The Family That Heals Together. She wrote a killer post last year in 2016 explaining why Kaayla Daniel was proven right and vindicated by the WAPF.

Others, Not So Much

There were a few other bloggers who covered the FCLO scandal with a single blog post, saying the evidence was inconclusive, they were not sure what to believe, and they said they would write another post later.

Nobody ever did write another post. It’s been 2 years. I’m still waiting.

Nor did they warn their readers about possible dangers of FCLO.

A couple of them did at least say they were holding off taking FCLO until they found out more. Which is at least something. However, we never got an update.

The rest of the bloggers didn’t say a word about the controversy. Not one word.

Oh sure, they had time to write blog posts about gelatin gummies and whatever else they write about. But in two years, we haven’t heard a single word — not one word — about the FCLO controversy from Food Renegade, Nourished Kitchen, Mommypotamus, Holistic Squid, Real Food Forager, Hollywood Homestead, etc. etc.

Really, Food Renegade? The woman who writes viral articles about how dangerous orange juice is? You can’t find a spare minute to write about Kaayla Daniel’s whistleblower report?

The Food Renegade about page reads: “I want to save lives. Your life. My life. My family’s life.”

But I guess any concerns about the potential hazards of FCLO is not important to write about. But she’s got time to write recipes like Espresso Ice Cream and Creamy Paleo Dip. Oh… but Kristen Michaelis of Food Renegade didn’t write those recipes. Courtney Polivka did.

So I guess Kristen is too busy to write on her blog anymore… so she pays someone else to do it. In fact, I scrolled and scrolled and couldn’t find a recent post written by Kristen.

I guess maybe it’s not so much about saving lives anymore?

Bloggers like Sarah Pope of The Healthy Home Economist, Jenny McGruther of Nourished Kitchen and Kelly the Kitchen Kop quietly swapped out their links to FCLO and started promoting a different brand.

Or, worse (actually I don’t know which one is worse), they just left their posts advocating FCLO up, with the affiliate links still active.

As many of you know, I used to run a large blog network within this community, and FCLO was one of the main supplements we all promoted. I helped a lot of bloggers make money and they were all marketing FCLO. I confronted a number of these former blog network members… asked them if they had considered taking down their posts or at least covering the FCLO scandal. Most of them either ignored my messages, or worse, deleted my comments and blocked me on Facebook.

I guess I could understand if these people hadn’t spent years making money off of FCLO. Or if they had stopped blogging. But nope, they’re still blogging. Still making money. Many of them make enough money to support their families. We’re talking six figure incomes.

And yet they can’t make the time to write an update about FCLO, this “fermented cod liver oil” that may very well be damaging people’s health.

Why Are So Many WAPFers Getting Sick and Dying?

Dr. Ron and Rami are not the only FCLO adherents that lost their lives. One of the reasons Kaayla started investigating FCLO years ago was a rash of pulmonary embolisms in the WAPF community. Deidre Currie was one of those people who lost her life (watch the video interview below with Archie Welch, her husband who tells the story).

There are a number of other WAPFers slash avid FCLO consumers who have gotten sick or seriously injured, and many have died over the years. For example, Katherine Czapp died of cancer at age 56 last October. WAPF honorary board member, Carol Esche, died the same month of metastatic breast cancer.

There’s another blogger I know who has a child with cancer. As far as I know, she is still giving her sick child the FCLO.

What’s causing all of these illnesses and deaths? We don’t know… But isn’t it odd that so many people who eat such a very healthy diet are getting so sick? Sure seems odd to me…

I’ll never forget when one of my readers read my post about the possible dangers of FCLO, and she told me her toddler, whom she had been giving FCLO, had gallstones and pancreatitis:

Wow. So what do you recommend using in the homemade baby formula?? A few yrs ago my daughter was hospitalized for pancreatitis from gallstones. She was eating so healthy but taking green pastures cod liver oil. We stopped giving it to her after bc we weren’t sure. Could it have contributed to the problem. – Hannah Klamm (Cheeseslave Facebook comment)

Dr. Ron and his wife, Elly firmly believed it was the FCLO that caused his fatal heart disease (you can watch my video interview with him below.)

But on the other hand, Rami really believed in the FCLO and continued to take it (Gumpert writes about that in this post).

For bloggers who still believe in the supplement, that’s understandable. Maybe not smart, and not responsible (if they had done more research, they would definitely have seen the ample evidence that there is reason to be concerned about this supplement)… but I can’t blame Rami or the others for continuing to put their faith in the product.

But I take issue with the bloggers who used to recommend FCLO and never wrote a single post about the whistleblower report and the allegations. Many of these bloggers have since stopped taking FCLO, but have not come clean with their readers about why they no longer take the product. I think some of them don’t want to “rock the boat”. Maybe they don’t want to take a stand because they don’t want to offend anyone.

They leave up their posts about FCLO without ever editing them. Posts like this one and this one recommending FCLO. Oh, sure, she’s removed her links to the product. But she never went back and edited the post.

Does this blogger (Mommypotamus) still recommend FCLO? We don’t know. The comments on her site asking about whether she still recommends FCLO go unanswered.

They protect their ego and their standing. But what if this product is making people sick? What if this oil really is rancid and it’s killing people?

I’m not saying it is. I don’t know that for a fact. But you would think these bloggers would at least feel the need to REPORT on the controversy. Isn’t that what they do? I mean, as journalists?

They all knew Rami and Dr. Ron… and yet, crickets.

Maybe they’re avoiding the topic because they don’t want to cause controversy. And yet… isn’t it ironic how bloggers like Food Renegade LOVE controversy when it serves them… when they make money from their viral posts about toxic orange juice … but they can’t be bothered to write about a supplement that might be hurting people?

I wonder how that mom felt when she discovered her toddler had pancreatitis. Her boat was definitely rocked, and in a very bad way. You’d think that the bloggers who spent years plugging FCLO could have said a word or two to warn this mom.

“Half the harm that is done in this world is due to people who want to feel important. They don’t mean to do harm — but the harm does not interest them. Or they do not see it, or they justify it because they are absorbed in the endless struggle to think well of themselves.” – T. S. Eliot

At the end of the day, I don’t give a rat’s a** about whether people like me or not. I do care about people’s health. And I’m very distressed about the state of our health blogosphere. The people who are supposed to be doing this job are failing miserably. And I worry about all the folks out there who will fall victim to this.

God bless you, Dr. Ron and Rami. I am sorry that the blogosphere failed you. I know I had a hand in that and I regret my part. You were good men. You were loved and you will be missed by many. I am praying for your families.