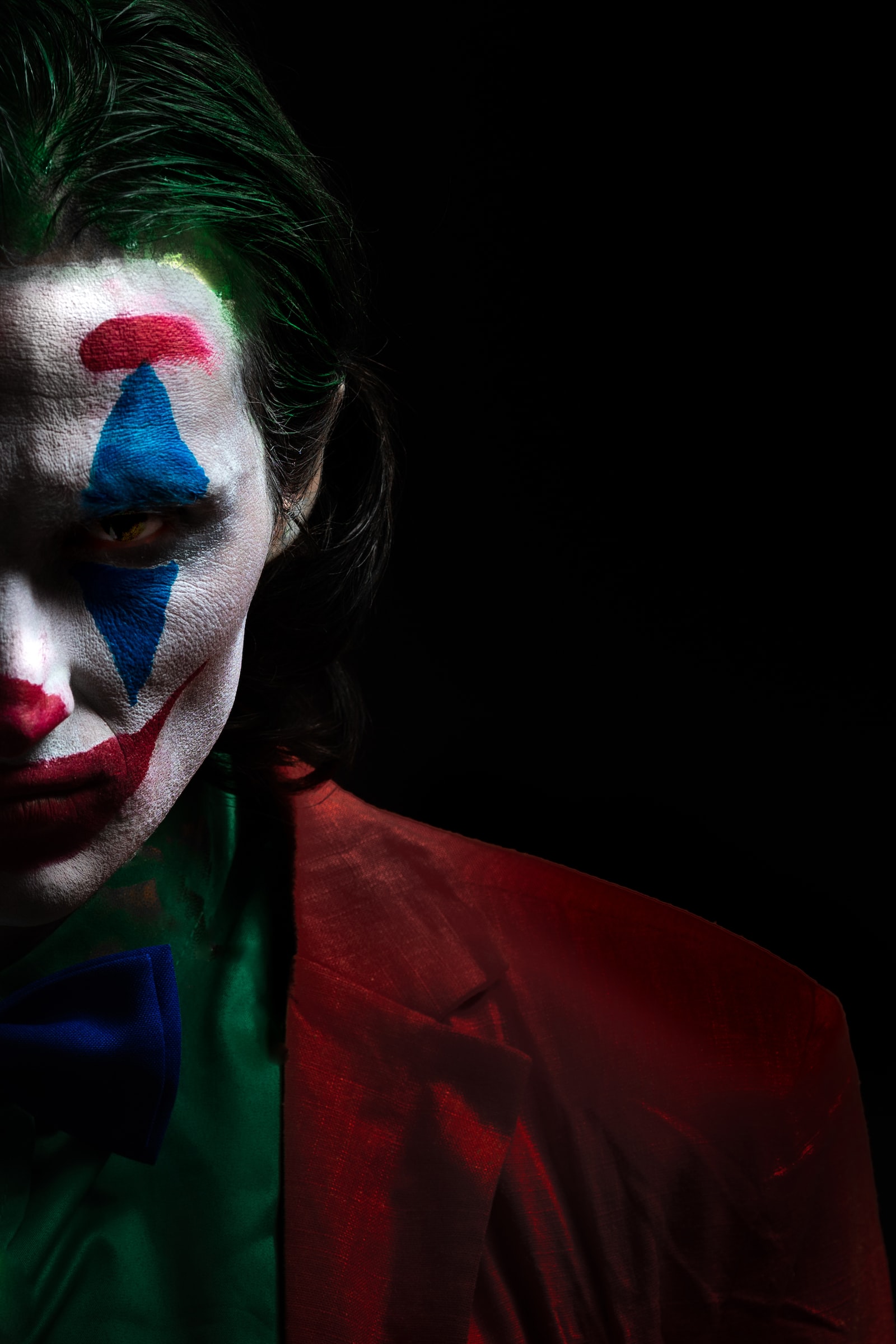 I watched the Tucker Carlson interview Kyle Rittenhouse last night and I for one did not fall for it. I smelled something off.

Here it is, in case you missed it:

This whole thing smells like Clowns In America (CIA).

Remember that song by Lynyrd Skynyrd called That Smell?

I can smell these clowns a mile away. Just seen too much.

In this post, I'll share my thoughts about Tucker Carlson, Kyle Rittenhouse, and the man they tried to smear, Lin Wood.

Once I share what I have seen and read, you will start to smell it, too. The stench of the clowns. The smell of death that surrounds them.

Once you smell that smell, you won't forget.

Let's start with Tucker Carlson. I used to like him. Used to watch his show every night.

I stopped liking him back when he threw Sidney Powell and Rudy Guliani under the bus in November 2020 and painted them as conspiracy theorists for questioning the 2020 election. Right then he became our enemy.

Here he is in a recent Playboy magazine with one eye covered:

Okay, you can dismiss that as just an accident, like he just so happened to pose like that. If you don't know what that one-eye pose means, it has to do with the all-seeing eye.

But here's what I can't dismiss – this video of Tucker Carlson completely denying that 9/11 was an inside job:

Watch how Tucker lies in that video. He dismisses 9/11 truthers as conspiracy theorists -- but he has no evidence to substantiate his position.

And then go back and watch him throw Sidney Powell under the bus a year ago.

"Silent on election theft for an entire year? Don't sell me on the virtues of Tucker Carlson."

I was so happy last Friday when Kyle Rittenhouse was acquitted.

But this is what happens every time I follow the mainstream media narrative. I always get emotional (angry or happy, doesn't matter) and then a few days later, I find out the truth, and realize I was played.

When I watched Kyle's interview last night, I noticed a few things.

First of all, the whole interview seemed completely fake and staged.

Secondly, Kyle looked like he was acting. His words didn't match his expressions. He was talking about how horrible it was in jail and how he couldn't take a shower for 3 months. And the whole time he was smiling and almost laughing. The same guy who cried and fell down in court?

And at one point he appeared to be reading a teleprompter.

Also, Kyle said when he finally took a shower, his skin was red and bleeding. Why would your skin bleed if you didn’t take a shower for three months? That made no sense.

How To Spot Liars

If you haven't watched the TV show Lie to Me, I highly recommend it. Ever since I watched that show back in 2009, I have been able to see right through people. Especially on TV when I can watch people talk without sound, and slow down and rewind. Once you can see the micro-expressions, you can see through what they are saying and see what they really feel.

When I saw President Trump speak at CPAC in 2017 right after he got elected, I saw a man not reading a teleprompter. That's why I voted for him.

After decades of watching liars reading from teleprompters – both Bushes, Obama, the Clintons – I could tell Trump was different. He wasn't reading from a script. And he had authenticity.

Many people posted online last night in defense of Lin Wood. Here are a few examples:

I posted more on my Telegram and will continue to post more as I see them.

Lin posted this statement this morning, which I thought was very interesting and illuminating:

1. When was the interview arranged?

2. Who arranged the interview?

3. When was the interview conducted? Kyle’s verdict was rendered around Noon on Friday. With clips of the interview shown, Fox and Tucker were promoting the interview on Friday evening. That sure was a fast turn around!!!

4. How did Kyle go in a few short hours from being the emotional young man exonerated on murder charges to appearing to be a composed, scripted young man in the Tucker Carlson interview?

5. After this national and personal ordeal, why did Tucker focus on me??? Weren’t there more important issues to discuss publicly?

6. I was NEVER contacted by Fox or Tucker Carlson to be informed of the accusations and afforded an opportunity to respond. Why not??? Tucker Carlson (and Sean Hannity) have my cell number. I was one call away. This was clearly  a Fox ambush hit piece on me. Who wanted to use Kyle Rittenhouse to falsely attack me?

6. Why did Fox totally ignore the background of David Hancock (a/k/a Fraudcock), the disgraced former Navy SEAL, in discussing Kyle? I spoke to Kyle one time briefly over a year ago. Fraudcock has been in total control of Kyle and his mother for almost one year. The public record raises very serious questions about the honesty and agenda of Fraudcock.

7. Why did Tucker strongly suggest that I was one of Kyle’s criminal lawyers? I was not. John Pierce was calling the shots for Kyle during the time period in question along with Mark Richards. I was not. I was just trying to help Kyle through #FightBack. I had agreed to help him in defamation matters after the criminal case. Why did John Pierce terminate that relationship almost immediately after #FightBack posted the bail monies.

There are MANY more serious questions to be explored with respect to this Deep State ambush hit piece.

Draw your own conclusions.

Check out what Tore Says had to say about David Hancock, who has been the spokesperson for Kyle Rittenhouse and his family for over a year:

Now read this Daily Mail article in light of the fact that Tore Says (who worked with Brennan) says that David Hancock worked under Brennan.

Now this is all making sense.

Hancock is the one who is “handling” Kyle and his mother. He’s the one pulling the strings and he is working for the DS. That’s obvious.

Why do they attack Lin? Because he tells the truth.

Many others are now taking sides against Lin Wood.

There will be more who reveal their true colors. Some just can't see through the masterful clown show. Others are on the take. Paid shills.

Let's just watch and wait and see who defends him, who turns on him, and who stays silent. I'll keep posting on my Telegram.

By the way, I don't post much on Instagram because people over there report you and get you banned.

To really understand how the Clowns in America (CIA) make the sausage (fake news), you have to see it in action.

The more you watch their fake news stories and put the pieces of the puzzle together, the more obvious it becomes that it's all fake. Like a badly written soap opera.

In this section, I'm going to share four videos with you.

Watch these four videos and you will begin to see what I am talking about.

Barack Obama REAL FATHER The Founder of The Cult of Subud?

The first video is about Obama and his real father, a guy who runs a cult in Indonesia.

Now that you've seen that, watch the next three videos from Jennifer Mac telling the whole story about Trump, Obama, the birth certificate, and Loretta Fuddy (who is really Obama’s mama) faking her death in the plane crash.

Jennifer Mac: President Trump, 2012 Election Fraud, and Obama was NOT born in Kenya???

Now that you've seen the videos above, I have just one more for you to watch.

I know, I know, it's a lot of videos to watch, but trust me. You have to SEE it for yourself.

If I try to explain it to you, you'd never believe me.

I made this video in March of 2021. It is more true now than ever. Especially watching this fake Rittenhouse charade.

As Juan O Savin said, "It's fake! It's theater! It's Hollywood!"

I spent many years in Hollywood, and I know how fake it is.

Ask yourself, what are the chances we would see a false flag terrorist attack in Wisconsin days after the Rittenhouse verdict?

I'm not saying the Wisconsin terrorist attack was fake. I'm saying it was a false flag.

Here's the definition of a false flag:

Now we know why the Rittenhouse court case seemed over the top. They were acting. Remember the judge with his phone going off with the Proud to Be an American ringtone?

Judges never ever do that shit. Ever been in jury duty? That never happens.

Was Kyle Rittenhouse a crisis actor? Jordan Sather says no.

But Sather can't be trusted. How do I know? Because he's been caught in lies.

As Tore Says, when someone attacks you or blocks you for asking a question, that's how you know they can't be trusted. Jordan Sather blocked me from his channel like a year ago, just for asking questions.

And there are a lot of weird coincidences. As the 17th letter says, how many coincidences until mathematically impossible?

I don't know if Kyle is a freemason or Deep State, but my eyes are open and I'm watching.

In the meantime, take a look at this dig on Kyle. Pretty interesting.

And don't forget this:

Now we wait and we watch.

Now is the time to watch closely and see who comes out in support of Lin Wood and who stays silent.

The trash takes itself out.

Oh, and PS: I'm going to add comments to this blog. Looking forward to interacting with you on here! Haven't gotten around to it yet but it's coming soon.