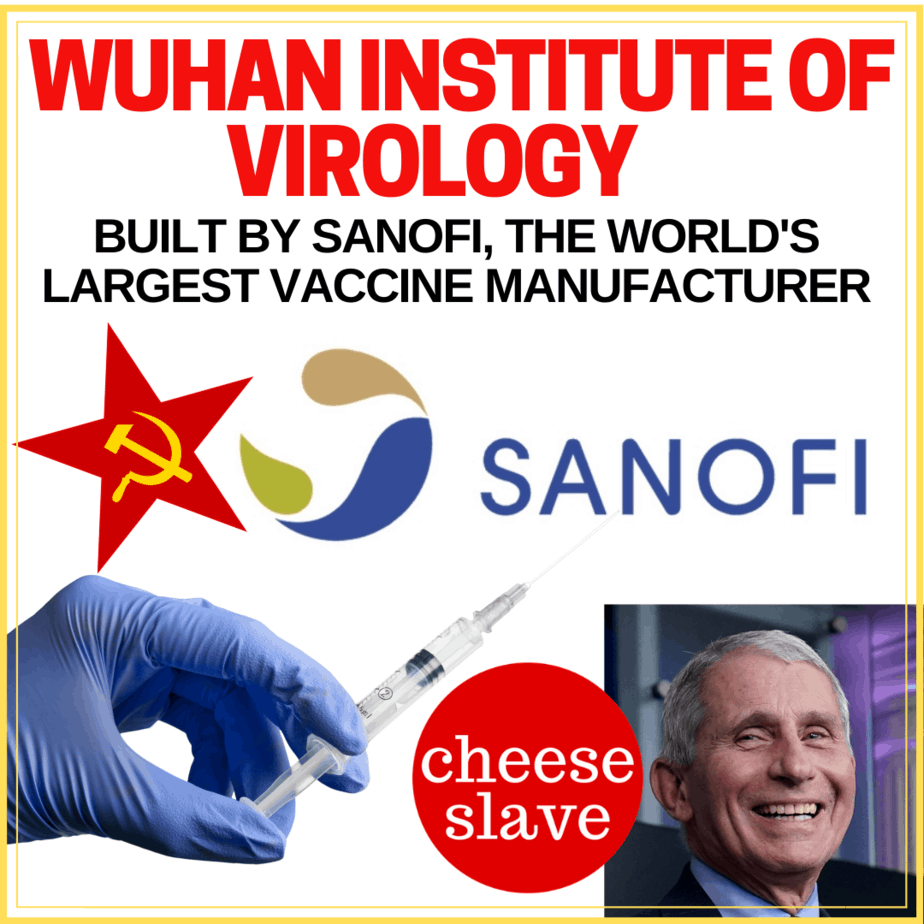 The French Connection: Wuhan Institute of Virology Was Built By Sanofi, the World’s Largest Vaccine Manufacturer

In the wake of #FauciGate, this week’s FOIA release of 3,000 pages of emails from Dr. Fauci, we now find out a new blockbuster piece of information about the Wuhan Institute of Virology.

In this post, I’ll show you the proof that Sanofi, the world’s largest vaccine manufacturer, built the Wuhan lab.

We have just learned that The Wuhan Institute of Virology is where Dr. Fauci funded gain of function research.  Fauci the liar tried to deny it to Rand Paul but now we all know that the NIH funded the lab.

Yahoo News reports, “The National Institutes of Health funneled $3.4 million to the WIV through the non-profit EcoHealth Alliance from 2014 to 2019, for the purpose of researching bat coronaviruses.”

According to Wikipedia, gain of function research is “a type of medical research that alters an organism or disease in a way that increases pathogenesis, transmissibility, or host range (the types of hosts that a microorganism can infect.”

In other words, gain of function research means studying how to weaponize a virus.

A year ago, people like me were getting repeatedly thrown in Facebook jail for saying the virus came from China and that Fauci was a criminal and a genocidal murderer. Turns out we were right.

People made fun of me, called me a conspiracy theory. Case in point:

As I have been saying from the beginning, I will have the last laugh. And a lot of y’all will owe me an apology.

But whatever, let’s move on to talk about Sanofi.

Wuhan Institute of Virology: The House That Sanofi Built

I actually saw this information on a George Webb video this morning — I’ll post it below so you can watch.

I have been watching George Webb since 2016. I lost him for a while, as happens often with people telling the truth, since we are so censored and shadowbanned. I had no idea he’s been writing books. He is one of the best researchers I have found. I’m going to order his books on Amazon and start reading them.

Here’s the video below:

The first part of that video is fascinating — it’s an interview with “Harry the Greek”, a guy who does great research as well, and his deep dive on indictments and global ratlines connecting to the FBI, Bill Barr, the Bushes, and an adoption agency in Strongsville, Ohio, that was busted for trafficking children and illegal drugs.

But anyway, if you skip to about halfway in the video, he talks about Sanofi.

Of course I don’t just listen to what other people say. I always go and research things for myself.

And here is what I found…

The “Sauce” on Sanofi

In the video, George Webb brought up this French article from May, 2020 saying France helped build the virology lab in Wuhan.

Alan Mérieux is the French billionaire who oversaw the construction of the Chinese lab. He is the son of Charles Mérieux, and the grandson of Marcel Mérieux, who founded the Institut Mérieux in 1897.

Institut Mérieux is a French holding company owned by the Mérieux family from Lyon. It was created by Marcel Mérieux in 1897 under the name Institut Biologique Mérieux (Mérieux Biological Institute). The vaccine development branch of the institute was separated early on and is now part of Sanofi Pasteur.

I dug some more and found this May 2020 article from an Indian newspaper reporting that yes, the Wuhan virology lab is a French-Chinese government cooperation project and that the first staff members trained at the Chinese lab were French people.

So the biggest vaccine manufacture in the world built the Chinese lab that created the virus.

Funny how that works, eh?

And ya’ll still don’t believe in the Deep State? What exactly is it gonna take to wake you up?