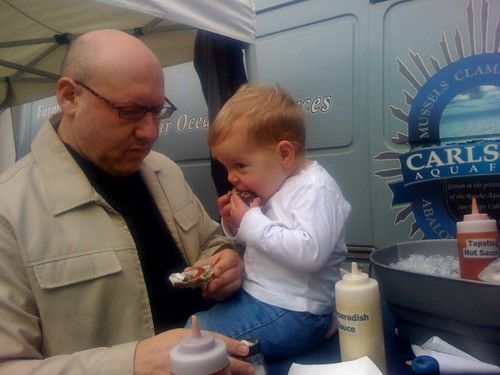 Almost every Saturday Kate and I go to the farmer’s market in Santa Monica and eat raw oysters on the half shell. The oysters from Carlsbad Aquafarm are so fresh (just harvested a few hours before) and unbelievably delicious. We are so lucky to live in Los Angeles and be able to eat fresh oysters for breakfast at the farmer’s market.

Last weekend Seth went with us. He must have eaten at least a dozen oysters. Kate ate about 6 or 7 herself. Every time she finished one, she’d delicately point with her index finger, asking for another.

Our friend Jungleen met us there with her son, Noah. Noah is not really eating an oyster — he’s just licking the shell. How cute is he with his blankie and his oyster shell? 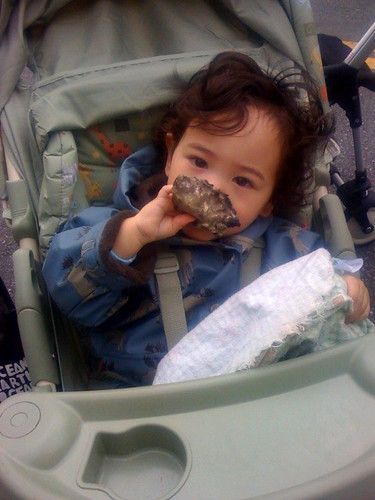 This is how I got Kate started. She wouldn’t eat the oysters at first but I would always let her lick the shell. Eventually she started asking for the oyster — and now she eats them as fast as she can. 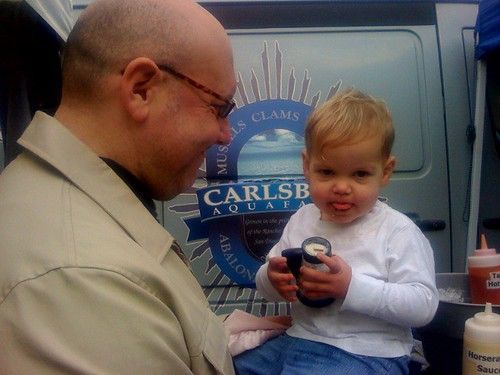 People think it’s amazing that Kate loves oysters. She always draws a crowd when we are at the farmer’s market. But it’s not really that surprising. She sees how much her daddy and I love oysters. Children want to do the things you do. I figure if I can get her started early eating super-nutritious foods like oysters and chicken liver pate and salmon roe, maybe she won’t be as picky as she gets older. And of course she is benefiting from all those fat-soluble vitamins and minerals and enzymes.

Oysters are also really important for adrenal health. One of my readers wrote in a comment this week that when you have adrenal exhaustion, your body gets overloaded with copper. The way to combat copper toxicity is to get more zinc. There is no food as high in zinc as fresh oysters — it’s off the charts! Not to mention vitamin B12, which many people are deficient in.

If you’re in LA, you can visit the Carlsbad Aquafarm stand at the Saturday (and I think Wednesday) Santa Monica farmer’s market. In addition to oysters, they have fabulous clams and mussels, and sometimes scallops. All super-nutrient-dense foods. Tell Rob Cheeseslave sent you.