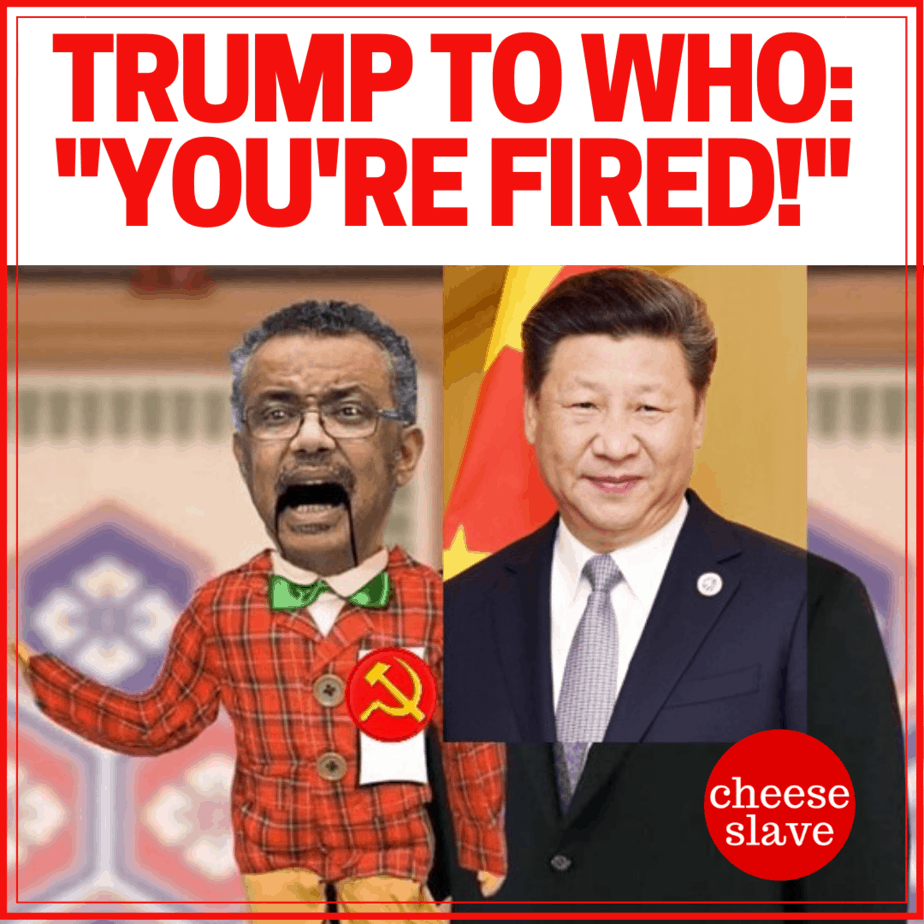 President Trump just terminated our relationship with the World Health Organization, saying the WHO was a puppet of China.

Trump Cuts Ties with World Health Organization, Calling It a Puppet of China

The President made the announcement in today’s press conference, streamed live just before 3 pm Eastern, May 29, 2020 —  almost exactly at the same time John F. Kennedy was born 103 years ago. (Coincidence?)

“China has total control over the World Health Organization despite paying only $40 million per year compared to what the United States has been paying, which is approximately $450 million a year,” Trump said. “We have detailed the reforms that it must make and engaged with them directly, but they have refused to act.”

“Because they have failed to make the requested and greatly needed reforms we will, be today, terminating our relationship with the World Health Organization and redirecting those funds to other worldwide and deserving urgent, global, public health needs,” Trump said.

“Countless lives have been taken and profound economic hardship has been inflicted all around the globe. They strongly recommended against me doing the early ban from China, but I did it anyway, and it was proven to be 100% correct.”

“The world is now suffering as a result of the malfeasance of the Chinese government,” Trump said. “China’s cover-up of the Wuhan virus allowed the disease to spread all over the world, instigating a global pandemic that has cost more than 100,000 American lives and over a million lives worldwide.”

The ties between communist China and the World Health Organization run very deep. So deep, in fact, that Chinese President Jinping’s wife is a WHO “goodwill ambassador”.

Last month, President Trump accused the WHO of being a “pipe organ” for China.

“They must have known more than they knew,” President Trump told reporters in the Oval Office. “We knew things that they didn’t know, and either they didn’t know they didn’t tell us … right now, they’re literally a pipe organ for China, that’s the way I view it.”

The Communist Party of China is the sole governing party of mainland China, infamous for its perpetual violations of human rights.

Most of our fake news media here in America doesn’t tend to cover the widespread human rights abuses in China, but some media outlets do.

If you do the digging, you will find the facts — from censorship to human trafficking to organ harvesting to eugenics policies including forced sterilization and forced abortion.

I subscribe to The Epoch Times and find them to be a good source of information, particularly regarding China and the Communist Party of China. Founded in 2000 by John Tang and other Chinese Americans associated with the Falun Gong movement.

“The founders said they were responding to censorship inside China and a lack of international understanding about the Chinese government’s repression of Falun Gong. In May 2000, the paper was first published in the Chinese language in New York, with the web launch in August 2000.“

The World Health Organization has been aggressively pushing vaccines and other pharmaceutical drugs for decades.

For those of us who are awake and aware of the dangers of vaccines and other pharmaceutical drugs, today’s action by the Trump Administration is a major coup.

See my other post on  Dr. Fauci’s Ties to Bill Gates & Communist China.

New Video: They Fall in Fall