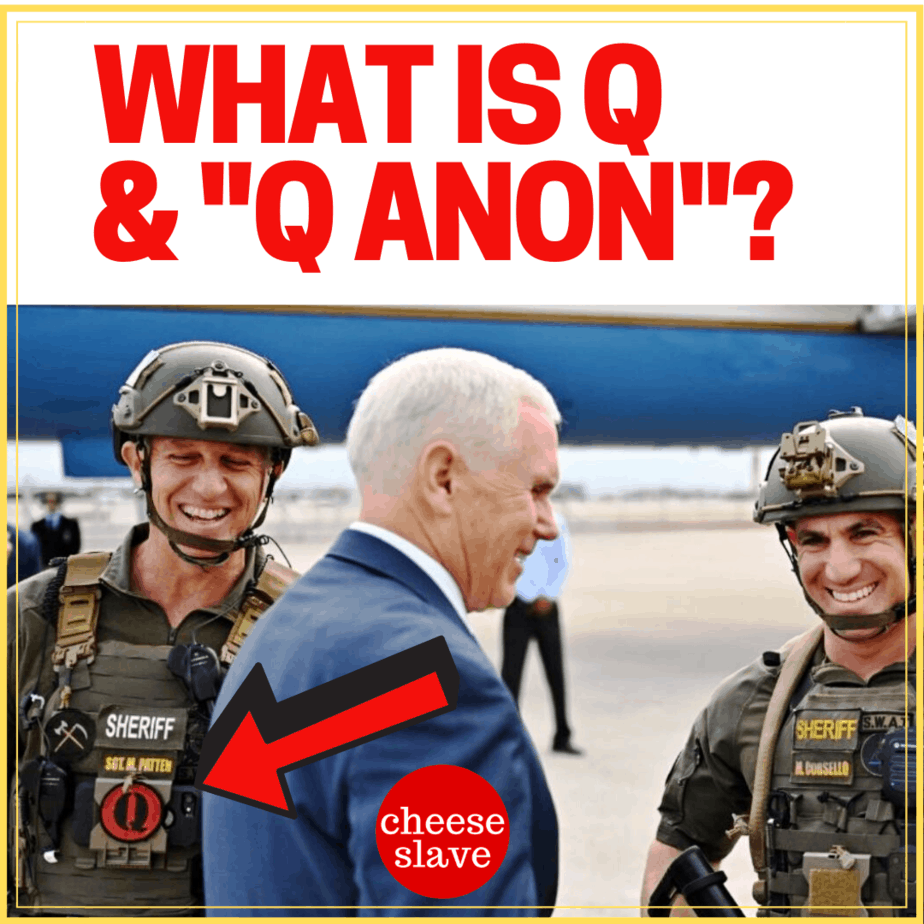 Hey, guys, I’m back! It’s been a hell of a few years… but I’m back to blogging.  If you’ve been following me on social media for the past month, you may have noticed all my feeds have been taken over with something called Q.

In this post, I’ll explain what Q is and why I am posting about it. If you miss my recipes, they’re still on the blog. And maybe one day I’ll go back to posting about food… but for the foreseeable future, I will be covering Q.

Why, you ask? Short answer: It’s literally the biggest story in human history.

The fake news mainstream media (MSM) will tell you that QAnon is a “debunked conspiracy theory” but those are the same people lying to you about literally everything, including the dangers of vaccines and other pharmaceutical drugs, GMOs and fluoride. Six corporations control all these media companies. So why would you trust them to tell you the truth?

What is Q? Watch This Video First…

To understand what Q is, I always suggest watching this video first:

That video was deleted because YouTube / Google censors information.

You can watch it on Rumble:

Q is a covert military operation that is made up of a group of people within the US military and Trump administration.

A “Q Anon” is a person who posts online on the Q board and on social media (Twitter, YouTube, Facebook, blogs, etc.) These people are what General Flynn calls the “citizen journalists” or “digital soldiers” (see below).

The Q Anons started out anonymous, but now many have gone public, including celebrities like Ted Nugent and his wife Shemane.

“Q drops” are written like riddles or codes that must be cracked and are posted on the Q board. The first Q drop was on October 28, 2017, but Q has been planned for years — more likely, decades.

Q is made up of both insiders in the government, and also the army of digital soldiers which I am a member of.

Anyone can join — you don’t have to enlist. I feel it is my patriotic duty to spend as much time as I can covering Q. This is war, and in times of war, all patriots must do everything they can to fight for freedom.

General Michael Flynn talked about this in a speech he gave in November of 2016, right after President Trump was elected:

General Flynn said the 2016 election was a “digital election”.

We have an army of digital soldiers… because this was an insurgency, folks. This was run like an insurgency. This was irregular warfare at its finest… in politics… We have what we call citizen journalists. Because the journalists we have in our media did a disservice to themselves, actually more than they did to this country. They did a disservice to themselves because they displayed an arrogance that was unprecedented. And so the American people decided to take over the idea of information. They took over the idea of information. And they did it through social media.General Michael Flynn, November, 2016

What Do You Mean We Are At War?

As President Trump keeps saying, we are at war with a “Hidden Enemy”.

This, my friends, is the second American Revolution.

If you really think this “coronavirus” thing is about a virus, it’s time to open your eyes.

I say that because throughout human history, we have been at war with the same enemy — and it’s not a country or even a group of countries.

So Who Are We Fighting?

Who is this “Hidden Enemy” POTUS is talking about?

Our enemy is the evil globalist cabal, or “Deep State” that rules the world.

If you want to learn more about the cabal, the next step is to watch the 10 part series, Fall Cabal. Find the link to watch in the Getting Started section on my Q Resources page.

A Brief History of Q

You may be asking yourself, when did this start and when will it end?

While Q has been around for a while, it’s still pretty underground. At the time of this writing, May 24, 2020, a very small number of people have even heard of Q yet. I’ve only ever seen a few hundred thousand people visit the Q board in a 24 hour period.

“The Calm Before the Storm”

President Trump had warned everyone of the coming storm just a couple weeks before, on October 6, 2017, at a military dinner.

He said it was “the calm before the storm.”

The Storm Begins in America

The storm hit the week of March 8 (the day we changed to Daylight Savings time). It was the week before the Ides of March, 2020.

NorthJersey.com reported the victim as “John Brennan, a horse trainer and mainstay in the paddock of Yonkers Raceway.”

What they didn’t tell you about is his mafia connections. Yonkers Raceway, of Seabiscuit fame, was legendary in the world of organized crime.

A cursory Google search “yonkers raceway mafia” will tell you all you need to know about the deep ties Yonkers Raceway had with the mob.

This is the first thing that comes up when I searched:

1953: Thomas Lewis, a Bronx union official who allegedly controlled more than 1,000 jobs at Yonkers Raceway, is killed on Aug. 28, 1953. The investigation into his death uncovers mafia ties and political corruption at New York state’s race tracks and, at the request of Gov. Thomas Dewey, the State Harness Racing Commission, at the behest of Governor Dewey, suspends the license. (Source)

Yonkers was infamous for horse doping and fraud, and according to the NY Times, the racetrack was “Bedroom and Office for Mafia Chiefs.”

Later that week, we saw the deaths of 7 members of the New Jersey Fusco family, including Grace Fusco and her son Vincent Fusco, the son of Vincenzo Fusco, who died in 2017.

Are the Fuscos any relation to Richard “Richie Nerves” Fusco, former consigliere of the Colombo crime family?

I’m not sure… however, we know from the New York Times article that “The family has deep ties to the horse-racing industry near Freehold Raceway. Some trained horses. Others raced them. The children’s father, Vincenzo L. Fusco, did both, according to his obituary.”

We also know that John Brennan, the guy who ran the known mafia den, Yonkers Raceway and who was the first Coronavirus death in New Jersey, attended a dinner at the Fusco home. (Source)

So… there you have it. Chances of the Fuscos being mobbed up? I say pretty high.

I’m sure we will find out the truth in time, as this web gets untangled.

Needless to say, the name “Vincent Fusco” is likely to ring a bell with Q followers.

If you don’t know who Vincent Fusca is, watch Episode 10 of the Fall Cabal series. The link to watch is on my Getting Started steps on my Q resources page.

Why is The Mafia A Big Part of the Storm?

Why is the crackdown on the mob important as part of the storm? Because when you’re draining the swamp, you start at the top of the pyramid and you work your way down.

It’s possible that Hillary was one of the first arrests back in the fall of 2017. Then we saw the arrests of the Saudi princes in November of that year. There’s a whole article on Wikipedia about the Saudi Arabian Purge of 2017-2019.

We have also seen over 12,000 resignations of CXOs and other high ranking public officials since Trump was elected. Go look for yourself.

March 15, The Ides of March

On the morning of March 15, the Ides of March, I woke up to a strong feeling that I needed to google “JFK CIA”.  I know, weird, right? But I literally woke up and felt compelled to look it up.

These are the results that showed up at the top of Google:

The first result said “MAFIA AND CIA LINKED IN JFK MURDER — from CIA.gov — the CIA website.

The second result was a link from the NSA.gov website saying that the MAFIA & CIA killed JFK, and that “George Bush knew everything”:

I have known about the CIA and the mafia and George Bush involvement in the JFK assassination for years, thanks to research, including this book, Family of Secrets, by Russ Baker. But I had never seen results like that come up at the top of Google. Government websites.

And then, that same morning, I saw this in my front yard:

Is it a red cardinal? Bird watchers, tell me — is that a cardinal?

Could it have something to do with this?

And notice the bird right over the word WATER.  President Trump keeps talking about WATER.

There are many more instances… I really need to do a whole post about it.

Q also talks about WATER a lot. Search the Q board for WATER.

What does it mean? I don’t know.

The Age of Aquarius

What happens in a storm? You get wet. Things also get clean. And water helps create new growth. When you water plants, they grow.

But there’s more to it than that…  we are entering a new age: The Age of Aquarius.

To understand what this means, you need to know what the word precession means:

“The Earth’s axis rotates (precesses) just as a spinning top does. The period of precession is about 26,000 years.” (Source)

That’s a dense definition which is a bit hard to process, so let me try to dumb it down a bit:

The Earth is rotating on its axis very slowly, and it takes 26,000 years for it to make a complete rotation all the way around. This is called the precession.

“The approximate 2,150 years for each age corresponds to the average time it takes for the vernal equinox to move from one constellation of the zodiac into the next. This average can be computed by dividing the earth’s 25,800-year gyroscopic precession period by twelve, the number of zodiac constellations.” (Source)

It goes in reverse order, so we are leaving the age of Pisces and going into the Age of Aquarius.

This is why there is so much symbolism with fish over this past couple thousand years.

If you’ve been feeling like something MAJOR is going on lately, and it’s not just about the Coronavirus, you’re right.

This is part of the reason Q says this is biblical.

And this is why I say it’s literally the biggest story in human history.

There is so much more I have to say on this topic, but as Amazing Polly always says at the end of her videos, I’ll stop talking now. (I totally get why she says that by the way… these rabbit holes go so deep.)

Aquarius / Let the Sunshine In (The Flesh Failures)