What Passes for Food in South Africa 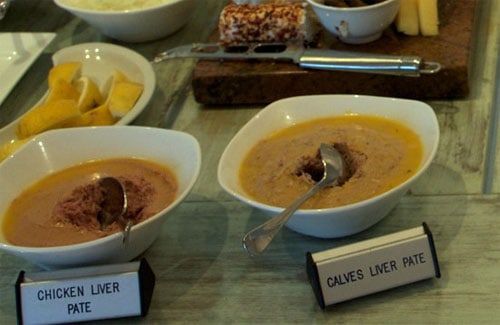 I wrote a post a while back called What Passes for Food in America.  It was all about the junk they pass off as food at free breakfast buffets at American hotels. Pastries, waffles, breads and extruded cereals made from white flour. Sausage with meat extenders. Liquid egg mix. And no fruit to be found except for sweetened jam. And the only milk available was skim milk. They had some cream but it was ultra-pasteurized.

This is a follow-up post. My in-laws went to South Africa and you won’t believe the nutritious food they had at their breakfast buffet. Sure, they have their share of white flour products, cereal, and jam at this buffet, but they also have a plethora of healthy nutrient-dense foods. There are plenty of fruits — fresh, stewed and dried. They also have a variety of breads including whole grain varieties.

And check out all the protein!  Salami, turkey and other cold cuts, smoked salmon and mackerel, various cheeses including cream cheese and cottage cheese, real eggs (still in the shell), and not one but two kinds of liver pâté — chicken liver and calves liver.

Granted, this may have been a nicer hotel than the one we stayed at in San Diego (I’ll have to ask my mother-in-law what it cost), but you’d have to pay a lot to get a spread like this in the United States.  I have never in my life seen pâté at a breakfast buffet in America — not to mention two different kinds.

Take a look at this amazing breakfast buffet: