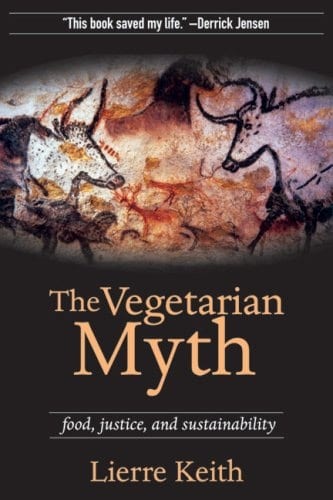 by Lierre Keith is one of the best books I’ve read in at least a decade. Maybe two.

This book is right up there with Malcolm Gladwell’s books. It is as groundbreaking to food and health as The Tipping Point

was (and still is) to marketing.

In Hollywood-ese, The Vegetarian Myth

is Michael Pollan’s The Omnivore’s Dilemma

. Well-researched, world-changing, and at the same time, gorgeously written and profound.

Keith has a rare ability to condense and break down gigantic volumes of information into simple tidbits that are easily absorbed. Just like cows that eat indigestible grasses and ultimately transform them into mouth-watering sirloin steaks. Or produce milk which is turned into L’Epoisse stinky cheese — a raw milk cheese I call “almost better than sex”.

is the book that 16-year-old girls should be reading. Instead of that piece of garbage best-seller, Skinny Bitch.

(I’m not an advocate of book burning, but in the case of that book, I might change my mind.)

Lierre Keith has such a phenomenal writing talent that as you read her book, you feel like you’re sitting in the room with her. As you read, you feel as though you’re lounging with her on a cozy sofa, savoring a glass of wine, in front of a roaring fire.

She’s your best friend from college you haven’t seen in decades, telling you her story of how she was a vegan for 20 years and how it destroyed her health and irreversibly damaged her fertility. She tactfully, gracefully shares the moment she woke up to myth she believed in for most of her life.

I cried reading this book. More than once. I bookmarked so many pages and underlined so many sections, it became absurd. I could not put it down. Wanted to read it in the shower. And yes, I will admit, I read it while driving.

In L.A., mind you, where the freeway is like a parking lot. Still, you should not be reading on a freeway. But I did. Because it was so good, like the most delicious chocolate, I could not stop.

Diet for a Misinformed America

You see, I used to be a vegetarian. When I was 24, I read Diet for a New America

I was so moved by that book by John Robbins (son of the founder of Baskin Robbins,) I so believed in what he wrote, that I decided to live in a vegetarian/vegan-friendly co-op, while I completed my Bachelor’s degree at the University of Texas at Austin.

I met some wonderful people there. We played bridge and gin rummy and watched Northern Exposure and read the New York Times. We composted. And we ate lots of beans and rice and kept giant vats of tofu in our industrial stainless steel refrigerators.

These people were thinkers. They questioned. Like me, they had gusto and passion and creativity. Like me, they were progressive liberals. Like me, they believed in human rights and animal rights. We wanted to end factory farming.

And like me, they were misled by the likes of John Robbins.

If only Lierre Kieth’s book, The Vegetarian Myth

had been out back then. It would have saved me a painful root canal and many cavities.

Not to mention my early onset of rheumatoid arthritis at the tender age of 25. It started in my knees. The pain was so bad, it kept me awake at night. And it was spreading to my elbows and my fingers. I remember my mother’s reaction, “You can’t have arthritis! That’s an old person’s disease.” But I had it.

Don’t feel sorry for me. A few cavities is no big deal. And, although the cartilage in knees is still damaged and I can’t do a squat to save my life, I was able to reverse my arthritis by ending my vegetarianism, eating meat again, and working to heal my digestive tract.

Feel sorry for all the teenage girls who are embarking on this treacherous voyage of vegetarianism, drinking soy milk and eating soy burgers and thinking they are going to save the planet. They’re the ones who are going to suffer from PCOS and irritable bowel syndrome and infertility and osteoporosis and depressions and Alzheimer’s. They’re the ones who are risking their lives and health and sanity in attempt to do good — when it reality, they’re only causing more harm. Not only to them — but to animals and to the planet.

Animal Rights and the Environment

How vegetarianism (and especially veganism) destroys our health is just one part of this book. Keith also examines the myth around vegetarianism and the humane treatment of animals. Eating meat does not automatically mean you’re supporting a factory farm. There are many farms that produce meat and animal-based products that come from animals living in harmony with nature, such as grass-fed meat and dairy, pastured pork and poultry. Further, she makes the very logical point that it is impossible to avoid killing. Plants must be killed in order to eat them. And when we grow crops like soybeans and corn, insects and small animals are killed every day in the process.

She goes on to completely annihilate the theory that vegetarianism will save the planet. For me, this was the most exhilarating and fascinating part of the book.

Keith explains that the beginning of her awakening was the day she decided to plant a vegetable garden in her backyard. She realized very quickly that in order to plant a garden in which vegetables would grow, she needed good soil. in order to cultivate good soil, she would need fertilizer. Fertilizer choices: (1) synthetic chemical-based fertilizers derived from fossil fuels (2) animal manure.

A vegan garden cultivated with animal manure would be blasphemy. And yet, if you use a petroleum-based fertilizer in your vegan garden, is that sustainable? Clearly not.

This was the awareness that opened Pandora’s box for Keith. How can vegetarianism save the planet when there is no way to grow food without animal manure — or petrochemicals, which are not sustainable?

The Importance of Topsoil

She went on to write about why top soil is so important. Without topsoil, there can be no life. Without topsoil, we end up with deserts and floods, and we won’t be able to plant those crops of soybeans and corn anymore. Without topsoil, grass won’t even grow, so you can’t have animals either. Obviously, producing topsoil is job number one in healing the planet.

And all these vegetarians drinking soy milk and eating corn chips who think they are saving the planet by avoiding meat are actually raping the land of its topsoil.

She writes about “humanless landscapes,” such as an untouched pine forest, really aren’t the end-all be-all that environmentalists think they are. Why? Simply because they don’t produce as much topsoil as a working farm does. We’re talking a real, old-fashioned farm where the cows graze on grass and the chickens are outside.

I’ll share this passage in the book, which absolutely took my breath away:

My food builds topsoil… On Joel Salatin’s Polyface Farm — the mecca of sustainable food production — organic matter has increased from 1.5 percent in 1961 to 8 percent today. The average right now in the US is 2-3 percent.

In case you don’t understand, let me explain. A 6.5 percent increase in organic matter isn’t a fact for ink and paper: it’s a song for the angels to sing.

Remember that pine forest that built one-sixteenth of an inch of soil in fifty years? Cue those angels again: Salatin’s rotating mixture of animals on pasture is building one inch of top soil annually.

Thank you, Lierre Keith, for being brave enough to write this outstanding book. I pray that it reaches the hands of many, young and old. This book, a rare one of thousands, has the power to truly transform this planet for the better.