Nutrition and Facial Development, Past and Present

Last fall I read Dr. Weston Price’s book, Nutrition and Physical Degeneration (you can read it online). If you haven’t read it yet, I strongly recommend it.

To summarize the work of Dr. Price, here’s a quote from the Weston A. Price Foundation’s brochure:

Wherever he went, Dr. Price found that beautiful straight teeth, freedom from decay, good physiques, resistance to disease and fine characters were typical of native groups on their traditional diets, rich in essential nutrients.

When Dr. Price analyzed the foods used by isolated peoples he found that, in comparison to the American diet of his day, they provided at least four times the water-soluble vitamins, calcium and other minerals, and at least TEN times the fat-soluble vitamins, from animal foods such as butter, fish eggs, shellfish, organ meats, eggs and animal fats–the very cholesterol-rich foods now shunned by the American public as unhealthful.

These healthy traditional peoples knew instinctively what scientists of Dr. Price’s day had recently discovered — that these fat-soluble vitamins, vitamins A and D, were vital to health because they acted as catalysts to mineral absorption and protein utilization. Without them, we cannot absorb minerals, no matter how abundant they may be in our food.

Dr. Price discovered an additional fat-soluble nutrient, which he labeled Activator X, that is present in fish livers and shellfish, and organ meats and butter from cows eating rapidly growing green grass in the Spring and Fall. All primitive groups had a source of Activator X, now thought to be vitamin K2, in their diets.

If you don’t have time to read the whole book, Nutrition and Physical Degeneration go to the website and just click around and look at all the pictures.

You will be astonished. The differences in facial structure between people eating a traditional diet of mostly animal fats and meat and dairy, and those eating modern foods like white flour and sugar, are truly stunning.

Here are just a couple of examples, photos Dr. Price took of children in New Zealand:

These children were raised on a traditional diet which consisted mainly of fish and shell fish: 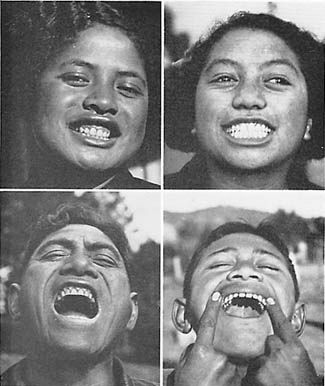 FIG. 69. Since the discovery of New Zealand the primitive natives, the Maori, have had the reputation of having the finest teeth and finest bodies of any race in the world. These faces are typical. Only about one tooth per thousand teeth had been attacked by tooth decay before they came under the influence of the white man.

Source: Nutrition and Physical Degeneration By Dr. Weston A. Price

Compare those children with the white children in New Zealand, eating modern foods like white flour and sugar: 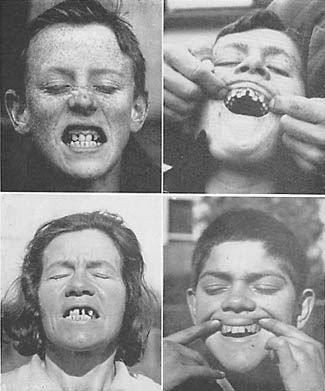 Source: Nutrition and Physical Degeneration By Dr. Weston A. Price

Ever since I read the book and saw all those pictures, I often find myself noticing people’s faces. I think a lot about facial structure and how people used to look compared to how they look now.

Our dentist, Dr. Raymond Silkman, has a great article on the WAPF website about facial structure and development. He writes about how facial development is impacted by the foods we eat when we are children (and in utero). He goes into detail about how poor facial development due to malnutrition causes an array of problems in later life, including TMJ, deviated septum, sleep apnea and snoring (among many others).

Just look at these two pictures. This first one is the face of a Native American woman raised on a traditional diet: 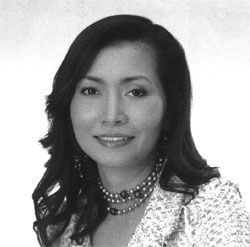 Note the broad middle portion of the face, well-developed lower jar and smoothness (lack of sags or circles) under the eyes. These individual illustrate the full expression of our genetic blueprint.

Here’s an example of a modern face with poor facial development: 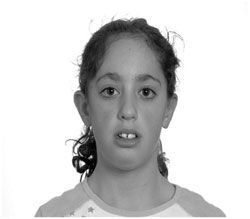 According to Dr. Silkman, “Narrow face, mouth breathing, sclera showing under the eyes.”

I was looking around online to find pictures of faces from a hundred years ago, back when we used to eat a lot of animal fat and didn’t have modern processed foods.

Just look at this teenager from 1890: 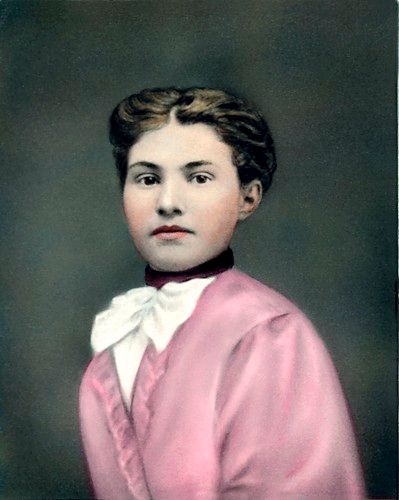 Magnolia Elizabeth (Todd) Lowman, ca. 1890 when she was around 16-18 years old. She lived in the northwest corner of Arkansas in the small town of Farmington.

Looks like the traditional people Price photographed, doesn’t she? Notice her broad, wide face and high cheekbones. She probably had very straight teeth and never had to wear braces.

Thinking about people living at the turn of the centuries made me curious to look at cookbooks from around that time. I found a neat Squidoo page that lists cookbooks online.

I was perusing one cookbook, written in 1894. It’s called Recipes Tried and True by Presbyterian Ladies’ Aid. This book was written by a group of church ladies from the Presbyterian Church in Marion, Ohio.

What’s interesting about these meals is they were eating a lot of meat, dairy products, and animal fat at every meal. Most of the recipes call for butter, cream or pan drippings. The most common fats used at this time were beef tallow, butter and lard.

There are over a dozen recipes for doughnuts (including crullers and fried cakes). Every single recipe called for frying in lard.

To give you a visual idea of how many animal products these people ate,

I highlighted all the dishes with meat, dairy and/or animal fats in red.

Of course, most people took cream in their coffee and many of those vegetables and vegetable salads would have been cooked in butter or lard or dressed with egg yolk and butter dressings — but you get the idea.

Here’s a menu plan for a week of breakfasts:

And here’s a week of dinners:

FAMILY DINNERS FOR A WEEK IN SUMMER. OZELLA SEFFNER.

Here are a couple of the recipes, one for scalloped potatoes with lots of butter and cream, and another for steak fried in a quarter pound of butter:

Pare and slice thin the potatoes; put a layer in your pudding pan one-half inch deep; sprinkle salt, pepper, and

over it; then put another layer of potatoes, and another sprinkle of salt, pepper, and butter, until you have as many layers as you wish. Fill in with

until you can just begin to see it. Sprinkle on top one cracker, pulverized. Bake in hot oven from one-half to one hour.

, one inch and half in thickness, well hacked. Over this sprinkle salt, pepper, and a little flour. Have ready a very hot spider. Into this drop plenty of

good, sweet butter (a quarter of a pound is not too much)

; when thoroughly melted, lay in the meat; turn frequently. While cooking, make many openings in the steak to allow the butter to pass through. When done, place on a hot platter and serve immediately.

Dr. Price wrote that the extremely healthy native peoples he studied were getting TEN times the fat soluble vitamins (found in butter, fish eggs, shellfish, organ meats, eggs and animal fats) than the people of his day. This was in the 1920s-30s.

And just look at the amount of animal foods and saturated fat and cholesterol people were eating in the 1890s. And compare that to what we eat today. How many people do you know who cook like those Ohio church women did in the 1800s?

Most of us won’t even use butter, much less cook a steak in a quarter pound of butter or fry doughnuts in lard.

Most people are eating cereal and skim milk for breakfast and for dinner, skinless boneless chicken breasts with steamed vegetables. We pride ourselves in shunning butter and instead, eating “healthy vegetable spreads” (margarines made from soybean oil) and we try to stuff ourselves with 5-6 servings of fruits and vegetables every day. Instead of adding cream to our coffee, we add Coffee Mate (full of corn and vegetable oils) or soy milk.

This is the complete opposite of what we used to eat 100 years ago.

It’s funny to me that some people think the diet recommended by the Weston A. Price Foundation is extreme. Hardly. This is a diet people have followed for centuries.

I think it’s much wiser to follow our ancestors who were hardy and healthy and free of disease, than to listen to modern-day pundits espousing a faddish diet with no basis for longterm health.