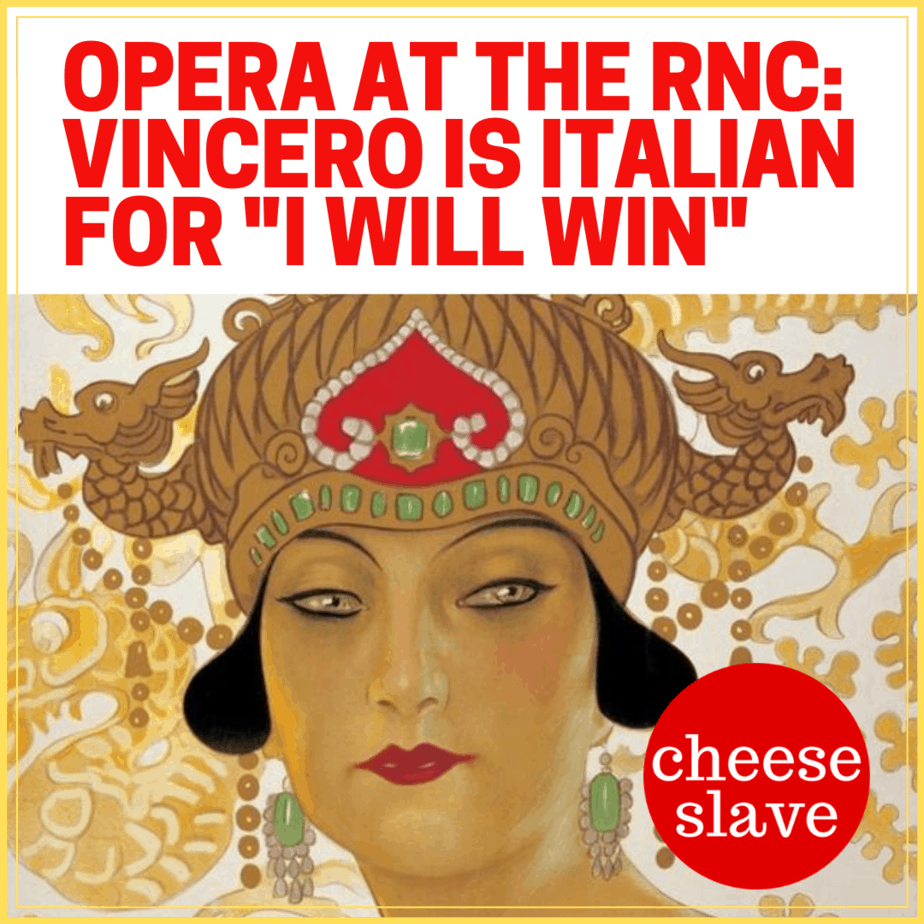 Opera at the RNC: In Italian, Vincerò Means “I Will Win”

Opera was performed after the fireworks last night at the Republican National Convention.  In this blog post, I explain why this particular aria (and opera) was chosen and what it means.

The specific aria that was performed was “Nessun Dorma,” which in Italian means, “Let no one sleep.” At the climax of the song, they repeat the word, “vincerò” which means, “I will win.”

The song “Nessun Dorma” is from the final act (this is important, as you will see at the end of this blog post) of Giacomo Puccini’s opera, Turandot.

But first, watch the video of the aria:

Turnadot: The Princess of Persia

The opera is the story of Turandot, Turan-Dokht or “Turandohkt”, which means “daughter of Turan, or ancient Persia”.

I wrote about the Ides of March and the beginning of the storm in this post What is Q & QAnon?

I promise to write about Purim and how it relates to all of this in a future blog post. If you want to dig into this topic sooner, go watch this video on the Jennifer Mac channel, which is all about the Princess of Persia and Purim.

Okay… so here’s the story of Turandot in a nutshell:

Set in Peking (now Beijing) China (China!!! Wow, right? “How many coincidences until mathematically impossible?” – Q), the hero is Prince Calaf, who falls in love with the cold Princess Turandot.

Oh wow! This actually connects to the Rh-Negative bloodline which is connected to the aliens.  Calaf is the northern area of Catalonia, Spain — where 25% of the population has RH negative blood. This is directly relevant…

I’ll cover this in another blog post, I promise… suffice it to say, it has to do with Kek, the frog-headed demon god from ancient Egypt that the cabal members worship. Hey, I’m not making this up — it’s on Wikipedia.

This is where Pepe the Frog comes from. Well, actually, Pepe was an internet meme prior to Q, and then it was appropriated for Q and the “reptile people” also known as the cabal.

Could this be why Melania wore a lime green dress last night? It did stand out, didn’t it?

She had on red shoes, too. (You can look that up — red shoes is also a  reference to the cabal and human trafficking.)

But back to the story of Turnadot….

To get permission to marry the princess of Persia, Calaf has to solve three riddles. If he gets any of the answers wrong, he will be killed.

Calaf passes the test, but Turandot still refuses to marry him. He offers her a way out: if she is able to learn his name before dawn the next day, then at daybreak he will be put to death.

Vincerò: Italian for “I Will Win”

This is the moment in the opera, the beginning of Act 3, when Nessun Dorma is played. Nessun dorma is Italian for “I want no one to sleep.”

At the climactic end of the song, the word vincerò is repeated, which means “I will win.”

Actually… the translation above (from Wikipedia) is written this way:

I looked it up and found a better translation:

What does Q say all the time?

I think so. If life imitates art. Because in the story of Turandot, our hero, Calaf wins.

Turandot comes to Calaf in the morning and kisses her and surrenders. At that point she has the power to kill him, but instead she tells him that she has now discovered his real name.

The Sum of All Fears

Before I end this blog post, I need to mention one more reference for “Nessun Dorma”.

It is played in the climax sequence of the movie, The Sum of All Fears.

Here’s the synopsis of The Sum of All Fears:

Based on Tom Clancy’s novel, this espionage thriller tracks a sinister plot to draw the United States and Russia into World War III. When the Russian president (Ciarán Hinds) suddenly dies, world tension escalates. Coupled with missing nuclear scientists and the threat of a nuclear detonation on United States soil, young CIA analyst Jack Ryan (Ben Affleck) must uncover who is behind the conspiracy.

OK, now watch the ending, the part where “Nessun Dorma” is played.

This scene is called “Payback”:

If that doesn’t give you chills, from your head to your toes, you may already be dead.

Fall cabal, death to the deep state. It’s all right there. Payback time.

And will ya look at that… Q has mentioned “Sum of All Fears” in 7 different drops — type it in and see for yourself on the QMap.

But before I do, one more thing… a quick update re: my recent whereabouts… and how to follow me.

Why You Haven’t Seen Me Online Lately…

I have not been able to make any videos or write any blog posts for nearly 3 months now due to the fact that we have been in the process of moving from California to Texas. I have been posting a bit about that on my Instagram and my personal Facebook page. (Note: I have been banned on Facebook and Instagram so you can’t follow me there anymore. You can find me on Twitter.)

We had to move because we could no longer afford to live in California due to COVID-19.

On top of that, the kids are in school but it’s “distance learning” so I can’t work since my son is only 5 and needs my attention all day. Not to mention all the unpacking!

I was also thrown in Facebook jail for 30 days at the beginning of August. Two  weeks later, they deleted my personal FB account that I had for 13 years.

They have also prohibited me from advertising on my Cheeseslave Facebook page. Is this illegal? Seems like discrimination to me.

Too bad I’m not black, because they have special programs for black creators. Then again, if you’re conservative and black, you probably don’t qualify. We should ask Candace Owens. She’s actually suing them right now.

Facebook also deleted my Q group as well as my Recovering Democrat page. Interesting because they only removed my political groups and pages — and yet Zuckerberg says it’s a “neutral platform”. Yeah, right.

Please note: I am being heavily shadowbanned (hidden) on all the platforms, so if you want to get my posts, you need to go and look up my accounts because the social media platforms will not show them to you even if you are following me.