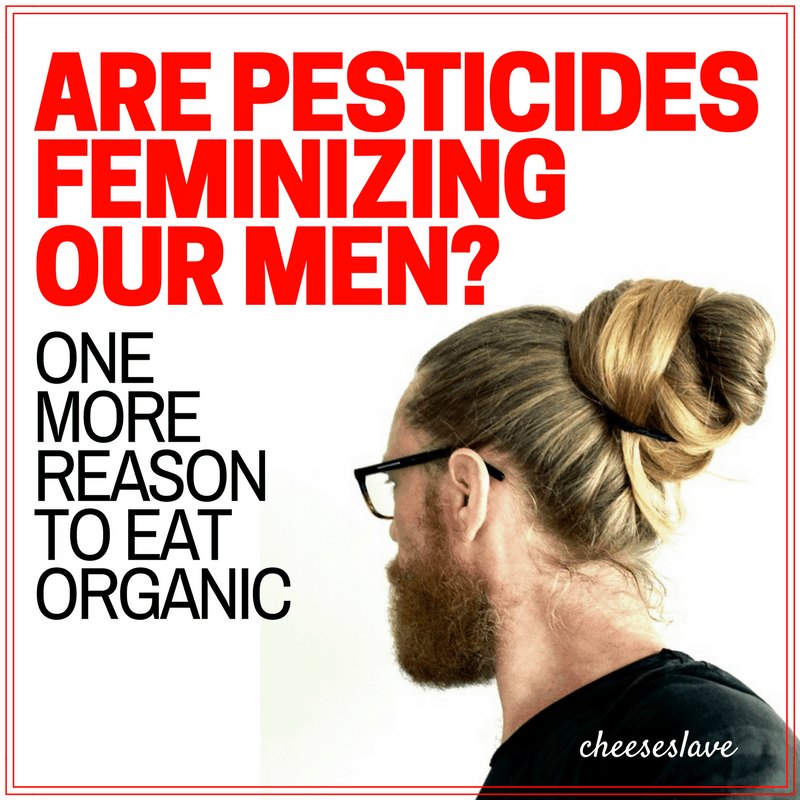 Are Pesticides Feminizing Our Men?

Are pesticides feminizing our men and disrupting our hormones? A common pesticide called atrazine turns male frogs into females, according to a 2010 study.

Are Pesticides Feminizing Our Men?

A 2010 UC Berkeley study showed that even at low levels, the herbicide atrazine decreased male fertility in frogs. Tyrone B. Hayes and colleagues raised 40 male frogs from larvae all the way up until sexual maturity. The frogs were swimming in water that contained a pesticide called atrazine. The atrazine level in the water was below what the EPA considers safe for drinking water.

They also studied a control group of 40 frogs who were not exposed to atrazine in their water.

When the study was completed, 10% of the frogs exposed to the atrazine had matured as females instead of males. While they still had male genes, they developed female anatomy, including ovaries.

These male-turned-female frogs produced eggs and were capable of mating with male frogs. The frogs that were exposed to atrazine also had lower testosterone levels, lower fertility levels and showed less interest in mating.

Humans don’t live underwater, so we aren’t completely exposed to atrazine 24-7 like the frogs were.  However, water is the main ingredient in most of our food and beverages we consume on a daily basis. Atrazine is also in our food supply, as you will see below.

According to Hayes, “Atrazine mimics a biological compound and increases the production of estrogen. It has been shown to disrupt hormone levels in other animals (besides frogs) as well as in human cells. It has also been found to induce breast cancer in rats.”

Atrazine Is a Pesticide Used in Our Food Supply

Atrazine does not exist in nature. It is the second best selling herbicide worldwide (second to glyphosate). It is used  to grow corn, soybean, sorghum and sugar cane, as well as several other crops.

Atrazine is found in the soil and was also found in 94% of water samples in Illinois, Nebraska, Iowa and Minnesota. (Source)

Impacts of Atrazine on Human Health

If atrazine is damaging animals’ health, could it also be harming humans?

Since 2003, more than 150 studies on atrazine have been conducted that have raised concerns about the negative health effects. Atrazine has been banned by the European Union. (Source)

Independent scientists have cited evidence that atrazine may be carcinogenic. (Source)

Research has shown that even when women drank water with low levels of atrazine, their menstrual cycles became irregular and their estrogen levels decreased.  Consumption of the pesticide has also been linked to miscarriage, low birth weight for newborn babies and premature births. (Source)

How to Avoid Atrazine

A study found that people who “often or always” eat organic have 65% lower pesticide levels compared to people who eat the least amount of organic foods. (Source)

Look for the organic seal on labels. If shopping at a farmer’s market where there are no labels, you can ask if the foods were grown organically, or at least if they were not sprayed with pesticides or herbicides.

GMOs, or genetically modified foods, are banned in Europe, but do not have to be labeled in the United States. GMO food has much higher levels of pesticides than organic food.  Here’s a list of the top 10 GMO crops.

Since corn is one of the main crops atrazine is used on, you should look for foods that do not contain high fructose corn syrup. This will be shown on the label. Cane sugar, unless it is organic, is also sprayed with atrazine.

If you buy organic, you will be able to avoid HFCS and non-organic cane sugar.

4. Filter your water at home

Not all water filters work the same. See my post on how to filter fluoride with a water purification system.