Restaurant Review: Animal Lives Up to the Hype

I’ve been dreaming of going to Animal Restaurant here in Los Angeles for almost a year now. Ever since I read the review in The New Yorker magazine.

My husband made my dreams come true this Valentine’s Day.

Now, maybe eating calf’s brains and pig’s ears may not be your idea of romantic.

But you know what they say: the way to someone’s heart is through the stomach. And pig’s ears in my stomach makes my heart go all fluttery.

This was hands-down the best meal I’ve had in the past year, maybe two.

Chef Suzanne Goin’s Lucques was right up there, not to mention her other new (and equally fabulous) restaurant, Tavern. And Mario Batali’s Osteria Mozza was sublime.

But Animal took my breath away. 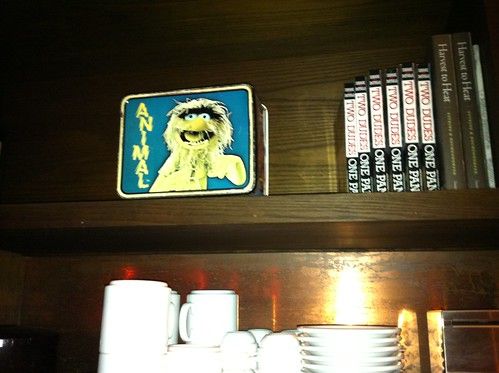 At first I thought the music was too loud. I hate it when restaurants have no rugs, curtains or tablecloths, all hard surfaces. The sound that bounces around the room becomes deafening.

But damn if these guys don’t play great music. Everything from Outkast to Weezer to Gnarls Barkley and Sonic Youth.

And as soon as my first glass of wine came out (amazing wine list,) I relaxed into Boston’s “More Than a Feeling.” Then the food came out and I floated up into the stratosphere. If I had had a lighter, I would have been holding it up.

I even asked the waiter if we could move into the back room and sleep on cots.

“We’ll do dishes,” I exclaimed. “We just want more of this food!”

Dude, I’m a full-on Animal groupie. I’m even considering getting a tattoo and buying a VW bus so I can camp out in front of the restaurant.

OK, not really. But maybe I’d do it if I didn’t have kids.

Here’s the menu (which changes daily): 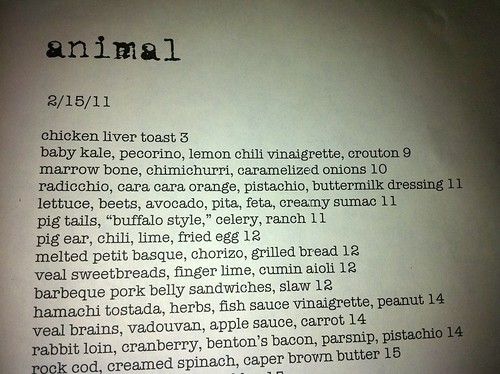 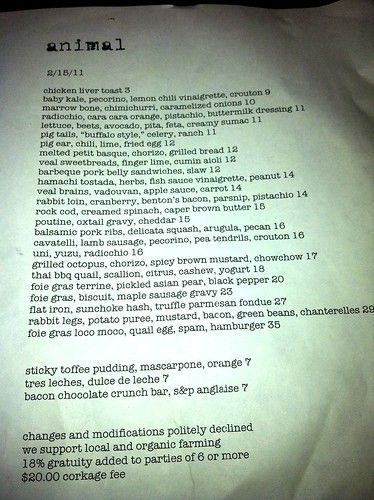 We started with the Pig Ear. Chili, lime, and deep fried pig ear — kind of like a salad. Served with a fried egg on top.

Yeah, this is my kind of salad. 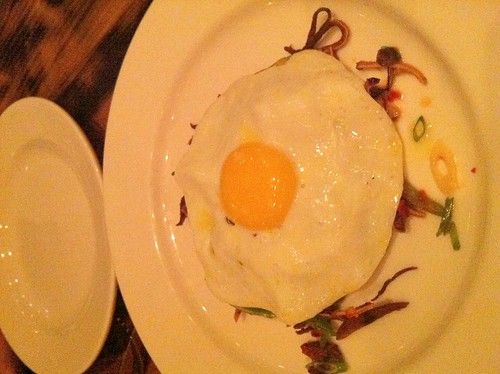 Then we ordered the Pork Belly Sandwich. Bacon-goodness with coleslaw on a soft bun. Deep South BBQ, only better. Way better. 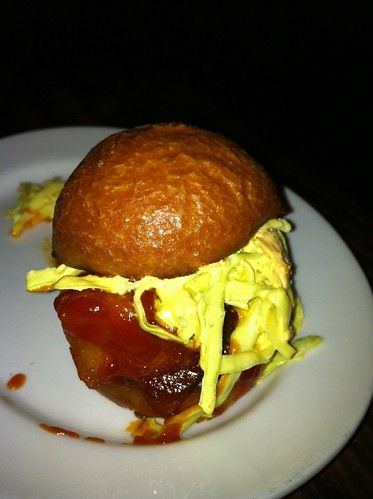 Next we got the Bone Marrow with Chimichurri Sauce.

As much as I love and adore Chef Fergus Henderson who put bone marrow on the map… dude, this one goes to 11. 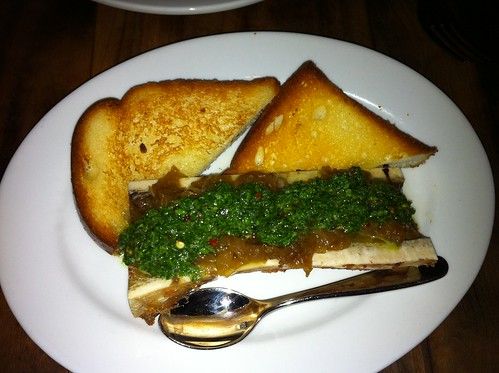 Just when you think it can’t get any better, you order the veal brains. This was my favorite so far. Fried and flavored with vadouvan, it tasted like a very light, more sophisticated Indian curry.

Vadouvan, sometimes called Vadouvan Spice, is the new “it” ingredient in gourmet cooking. Sometimes thought of as a “French curry” or “a French interpretation of Indian masala” because it is believed to have originated in a French settlement in India. Vadouvan is popular in France and Belgium and had its “coming out” to a general North American audience during Season 5 of the Bravo TV network series “Top Chef.” Source 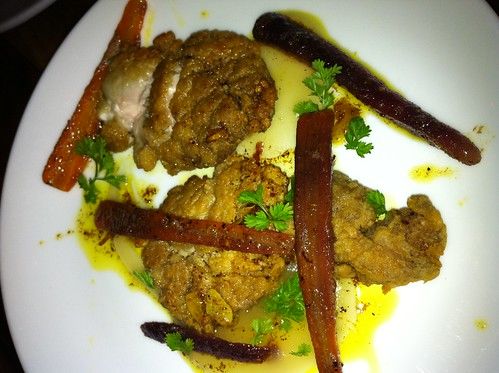 The brains were rocking my world… until I ordered the poutine.

I’m pretty sure poutine is the national dish of Canada. And for good reason. French fries topped with gravy and cheddar cheese curds.

And, not to be outdone, Animal makes their poutine with oxtail gravy. Does it get any better than this on Planet Earth?

You know where I’m going with this… If you go to Animal and you order the poutine, you will feel as though you died and went straight up to Heaven. 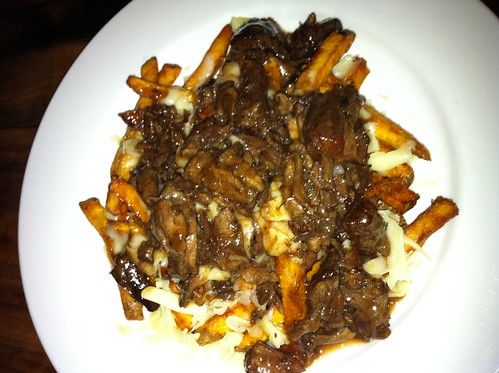 So, you probably think were were too full for dessert. Or, floating around in the clouds in Heaven, maybe we didn’t crave dessert. And you would be wrong.

Could you resist dessert at this Restaurant of the Gods?

How about a little British Sticky Toffee Pudding? 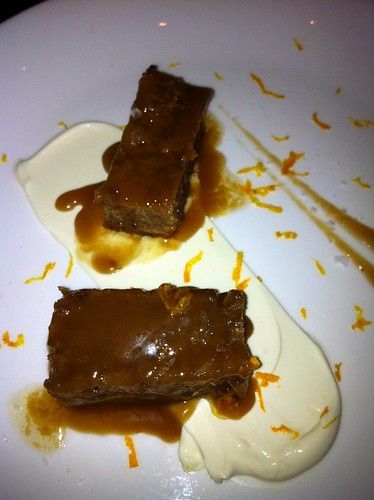 Or how about the Bacon and Chocolate Crunch Bar? 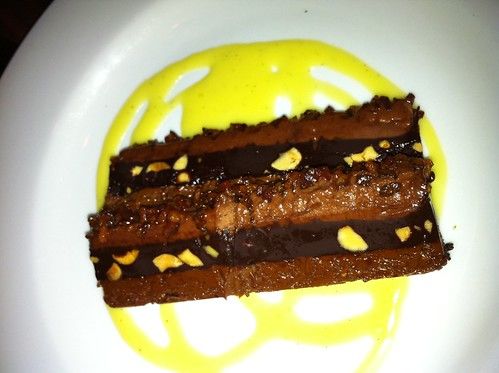 If you eat nothing else, get the Bacon and Chocolate Crunch Bar, the veal brains and the marrow.

Of course, now I’m thinking about all the things I haven’t tried yet. Better book another reservation.

Bottom line: if you are in LA, you can’t miss Animal. Missing Animal is a life unlived.

Call them immediately and get a reservation. You will be riding the Animal high for weeks, maybe months.

Or go check out their new restaurant, Son of a Gun — opening this week (or next?). The focus is seafood. Probably won’t be able to get in for a while.

No worries — I’ll be hanging out at Animal until the crowds die down.

I just loaded the cot into the VW bus.