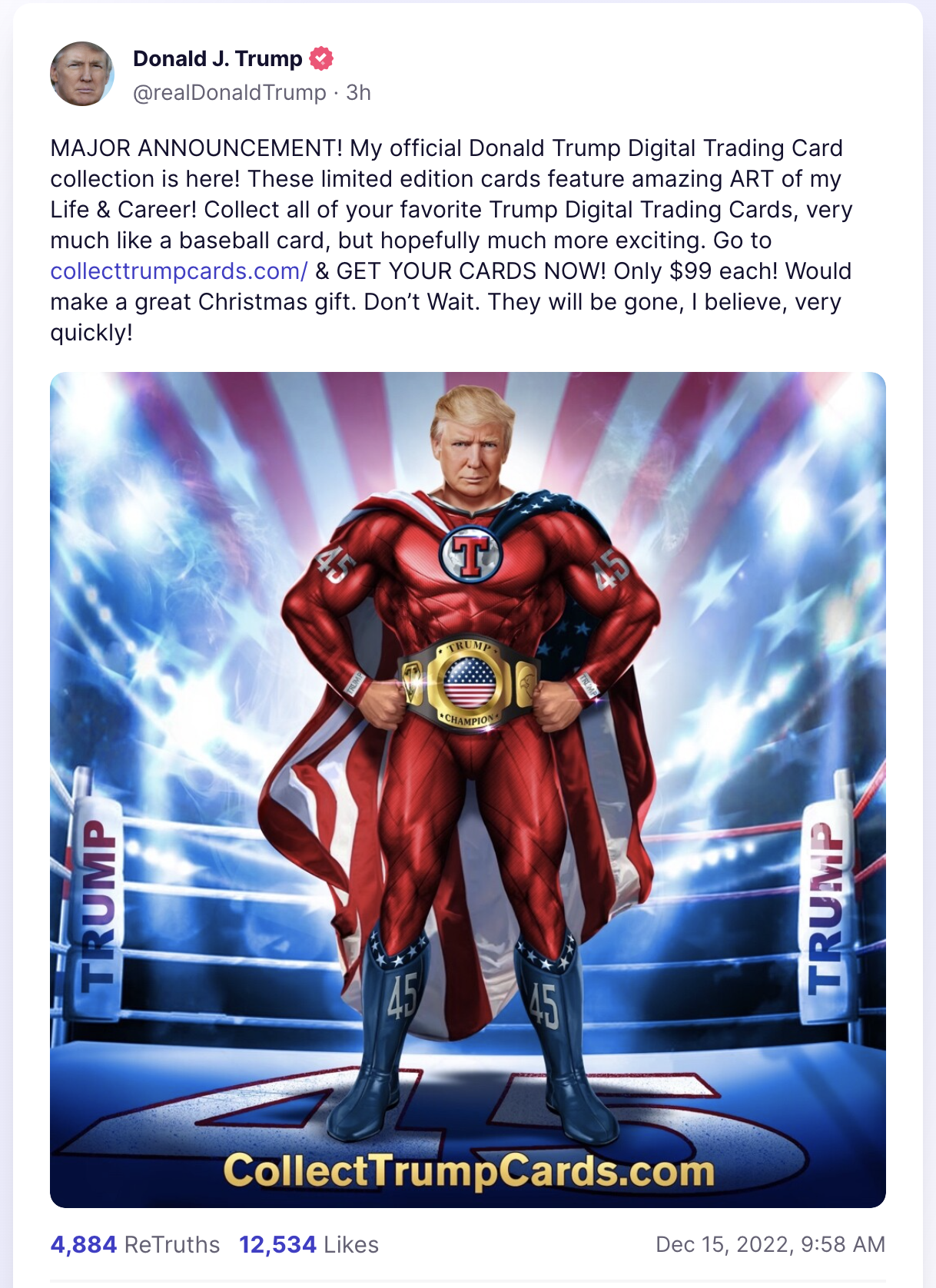 Most people have no idea why Trump’s announcement today is so important.

That's because they don't have any idea what the blockchain is and how it will revolutionize everything.

This is a WWE Smackdown playing out in real life. It's Trump and The Guardians (I'll explain The Guardians below) against the Deep State Globalist Mafia Banksters.

And Trump is going to win.

How do I know? In a word, receipts. We have them.

How do I know? In a word, blockchain.

What is the Blockchain?

Here's the definition of "blockchain":

This video of John McAfee speaking at Blockchain Nation Miami in 2018 is the best explanation I have ever seen of the blockchain.

If you watch this, you will understand why the blockchain, which is what cryptocurrency is built on, is the basis of pretty much everything in the future.

(Note: If you are reading this post in an email, be sure to click through to the blog to watch the video above. For some reason, the Ghost platform won't display embedded videos in emails.)

Okay, now that you understand what the blockchain is, let me explain what an NFT is.

NFT
abbreviation or noun
: NON-FUNGIBLE TOKEN : a unique digital identifier that cannot be copied, substituted, or subdivided, that is recorded in a blockchain, and that is used to certify authenticity and ownership (as of a specific digital asset and specific rights relating to it)

Okay, so you can probably understand that an NFT is something that is recorded on the blockchain.

But what does "fungible" mean?

Fungible means something you can substitute or subdivide into equal parts.

So something that is non-fungible is something that can't be broken up or substituted with something else. It's a piece of the blockchain that you own, and it's traced to you.

The End of Theft

Why is this important?

Well, if you take the time to watch the John McAfee video above (and I highly recommend that you do,) you'll see that he is basically saying that the blockchain will effectively end lying and theft.

I know, that's a very tall statement. But how can you steal something if everything is recorded on a blockchain that can't be messed with?

Who Guards the Blockchain?

The blockchain is stored on computers that are interconnected and decentralized.

Unlike our current monetary system which is centralized and controlled by a small number of people (just look at the pyramid on the dollar bill).

When we move from the current "pyramid scheme" to a decentralized blockchain, we the people are the guardians.

But wait, it gets better. Remember when I said above that I'd explain who The Guardians are?

Just look at what Space Force is called: Guardians.

And yes, Elon Musk is working with them. See my recent tweet:

I could be wrong about this – but I believe our US Space Force will be guarding the satellites that will store the blockchain.

And the blockchain isn't just about currency. It's about anything that needs to be stored and tracked and protected.

Haha ooh I never noticed that before! Look at the two pyramids.

Melania wore dresses that were giving us clues. It was a version of flag semaphore, according to Juan O'Savin.

Flag semaphore (from the Ancient Greek σῆμα (sêma) 'sign' and -φέρω (-phero) '-bearer') is a semaphore system conveying information at a distance by means of visual signals with hand-held flags, rods, disks, paddles, or occasionally bare or gloved hands.

Do you remember Melania's dress on election day 2020?

If every vote has a sensor and it's tracked on the blockchain, nobody can ever rig an election again.

What if Space Force, still locked down under Cheyenne Mountain, tracked all the ballots from 2020 and 2022 on the blockchain?

Can you say checkmate?

And look at Melania's blockchain dress in Bitcoin orange the day they left the White House – just a coincidence?

It's not just Trump who launched NFTs.

So it is clear that they are serious about cryptocurrency. Which is not a surprise to me.

Although Trump has pooh-poohed crypto in the past, implying that it wasn't safe, he has to say things like that to stay under the radar of the Deep State. Art of War.

JFK: The Starter, Trump: The Finisher

It is also not a coincidence that today is the day the National Archives is going to release more JFK files.

Speaking of JFK, the Bullion, Bitcoin & Bullsh*t channel made an interesting post on Telegram today:

They are pointing out the timestamp, 11:11. Granted, that was not the official timestamp on TruthSocial – it was on Telegram.

But, still, it made me think of JFK's executive order, 11110, which was his attempt to end the Fed.

Of course, this is why they killed him.

This is why you often see this meme of "JFK, The Starter" and "Trump, The Finisher."

So what am I saying? What does this have to do with Trump's announcement?

I'm saying that Trump is letting us know very clearly that he is embracing NFTs which means he is in support of cryptocurrency.

We know we need to end the Federal Reserve in order to kill the Deep State. But as I said in a recent video I made about the future of crypto, there is way too much gold in space for us to go on the gold standard.

Does that mean I think you shouldn't invest in gold? No, I am not saying that. It's gonna take us a number of years to get to space and start mining.

But I am saying that crypto and the blockchain is the future.

In that video, I also talked about Judy Shelton, Trump's pick for the Federal Reserve Board of Governors. She said she supported the gold standard in a "crypto sort of way."

So What Does This Mean?

In my mind, this means buy Bitcoin!

This is the strongest signal you can get to jump in and invest in crypto.

Bitcoin is not going anywhere, so that's where I started investing. I also hold XRP, Doge, and Etherium.

Here's my post about How To Get Started with Cryptocurrency.

In this post I explain step by step how to start investing in crypto, even if you just have a small amount of money. I started with just $1,000 but you can start with even less.

You can also spend $100 on one of Trump's NFT trading cards. I'm going to do it!

Want to Learn More? Watch My Recent Video About Cryptocurrency

Click here to watch my recent video about cryptocurrency.

I don't currently have a comment section here on the blog – hopefully soon. In the meantime, please follow me on Twitter and Facebook. I am happy to answer your questions on one of those platforms.