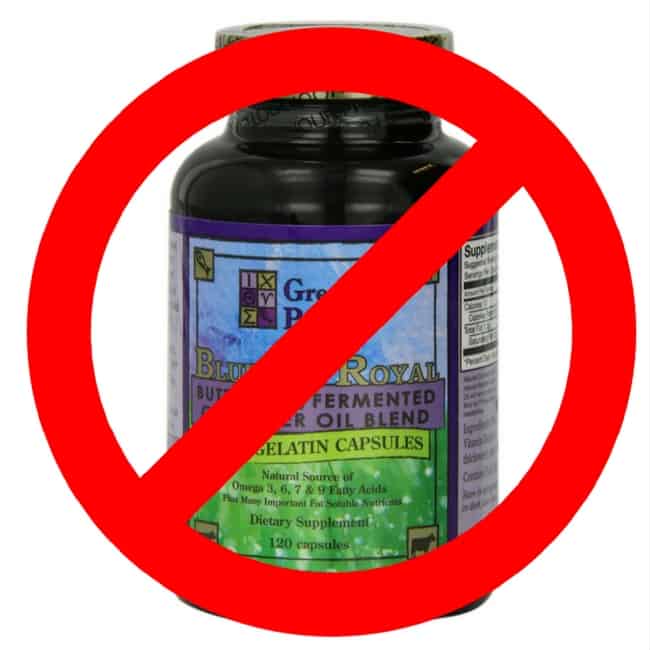 One of my readers sent me a link to this article by Jaclyn Harwell on her blog, The Family That Heals Together: The Weston A. Price Foundation Vindicated Kaayla Daniel in the Fermented Cod Liver Oil Controversy.

It’s worth reading. The author makes some interesting points.

Again, please click over to Jaclyn’s website to get a visual of the timeline. It’s very well done.

My Take On All Of This

I am disgusted by the lack of integrity we have seen from both the Weston A. Price Foundation and Green Pasture Products. These two organizations have worked in tandem over a decade to promote a product, FCLO, that is very questionable in terms of safety.

The mislabeling of the nutritional value and the ingredients is one thing… but the potential rancidity of the product is a much bigger issue.

To this day I cannot understand how this “FCLO” (or perhaps it should be called FPLO since the reports found they were using pollack as opposed to cod) is not rancid.

All the fish oil experts I interviewed (and I spoke to three different people, but I only posted one of the interviews on my blog) said that fish oil goes rancid and becomes toxic when it is exposed to light, air, and heat.

This is why fish oil manufacturers go to great lengths to protect these delicate oils from exposure to light, air, and heat. This is also why fish oil manufacturers recommend on their websites that you should store fish oil in the refrigerator after opening. Because when you open the bottle, the oil is exposed to air. Storing it in the fridge helps to slow down the rancidity. Rancidity is inevitable with all marine oils which is why they recommend that you store it in the fridge and buy it in small bottles and use it quickly within a matter of a couple months.

But we have yet to hear how Green Pasture Products’ fermented cod liver oil is processed. The owner, Dave Wetzel, has gone on record repeatedly saying that the FCLO is exposed to light and air. He has also never come forward to explain how he processes the oil.

I emailed Dave Wetzel and Sally Fallon asking for more information last year. Neither one of them ever wrote back. If the manufacturing process at Green Pasture Products does not expose the oil to light, air, and heat, why hasn’t Dave Wetzel, in almost a year, come forward  in the spirit of transparency to share what his processes are? We have no information from him about how he protects this oil from rancidity.

When I compare that to the interviews I’ve done with three different sources, all three people who are very involved in fish oil manufacturing… they spoke at great length and in great detail about how they protect their marine oils from exposure to light, air, and heat, from boat to bottle and capsule. They have many processes that protect the oil, such as manufacturing plants with dim lighting and processes to remove the air from the bottle when they package it.

But here it is, almost a year later, and we haven’t heard a peep from David Wetzel or Sally Fallon about how he is manufacturing this oil.

Brushing Off Heart Disease By Claiming It Was the Dosage

On the WAPF website, Sally Fallon wrote last year that “IF” Dr. Ron Schmid’s heart disease was caused by taking cod liver oil, it was because he took “too much”. She says that the WAPF recommendations are to take 1 teaspoon per day.

Here is what Fallon wrote on the WAPF website:

However, on the Green Pasture Products FAQ page, under the part about how much we should take, there is a video of Sarah Pope, WAPF board member and author of The Healthy Home Economist blog, recommending that people take 1 teaspoon of FCLO per day.

In the video, Sarah Pope says, “A large spoon is a teaspoon, believe it or not. It’s not a tablespoon.”

Except the spoon she holds up is a tablespoon, not a teaspoon.

Here’s the video (it’s set to start playing when she holds up the tablespoon):

Last year, after I rewatched Sarah’s video, I measured a number of large spoons from various flatware settings. All measured a tablespoon, not a teaspoon. I guess Sarah did not actually measure it?

So Sarah Pope, by her own admission, has (unwittingly) been taking 1 tablespoon of FCLO for years… and Sally Fallon said on the WAPF website that could cause heart disease.

Let that sink in.

Can you trust these people?

And that’s not the only misinformation they have published… you can still find gems like these on the WAPF website:

According to the USDA, salmon roe, or caviar, has 19 IU of vitamin D.

Um… that’s kind of a HUGE difference. Just to give you an idea of how outrageous this is, one 3-ounce salmon filet contains 447 IU of vitamin D.

You would have to eat 38 servings of salmon to get 17,000 IU of vitamin D. That’s over SEVEN pounds of salmon! How is it possible that one tablespoon of salmon roe has the same amount of vitamin D?

Sadly, when you google “salmon roe vitamin D”, the number one search result is WAPF board member, Sarah Pope’s article, Fish Eggs: Superior Vitamin D Boost in which she repeats that same number, 17,000 IU in a tablespoon of fish eggs. There are even commenters questioning her on the post… but she just says it’s from a study WAPF did.

This incorrect information has been published on multiple websites, all parroting the same number: Nourishing Our Children, Real Food Forager, The Coconut Mama, Holistic Squid and others.

For all of these reasons, I continue to be suspicious of Green Pasture Products and WAPF, as I think we all should be.

For all of the reasons above, as I relaunch Cheeseslave, I am in the process of removing all links to the Weston Price Foundation from my website. As much as I appreciate what I learned from “Nourishing Traditions” and Sally Fallon, and as grateful as I am for all the connections and community that I built from the WAPF, I feel that this lack of integrity is egregious and I can no longer trust anything they say or publish.

My integrity is everything. If my readers cannot trust what I publish, there is no reason for you to read my blog. I cannot link to a website run by an organization that refuses to act in a responsible way.

It’s very sad to me when people don’t take responsibility for their actions. I guess many people are making money off of the current setup, so they don’t want to speak out. And maybe they don’t want to “rock the boat” or “burn bridges”.

I think what Kaayla did by publishing her whistleblower report, and the people who supported her, showed a lot of integrity. It’s never easy to be the one pointing things people don’t want to hear. It’s never easy to stand out. But oftentimes that is what has to be done in order to make the world a better place.

Thank you to Jacklyn who wrote the post over at The Family That Heals Together. I’m grateful that you took the time to inform us and I am grateful for your display of integrity.