Are Vaccines Linked to SIDS?

Sudden Infant Death Syndrome (SIDS) is a difficult subject to discuss for obvious reasons. The death of a small child is horribly tragic, a loss for which there is very little consolation. It is also a necessary subject for the same reason, especially when a correlation exists between common infant vaccinations (such as the vaccine for pertussis) and sudden infant death syndrome.

A study that was published in 2011 in a scientific journal by Neil Z. Miller and Gary S. Goldman concluded that in nations where there was an increase in vaccinations, there was also an increase in the occurrence of SIDS. The graph below shows that as the vaccine rate increases, infant mortality also rises. (Source) 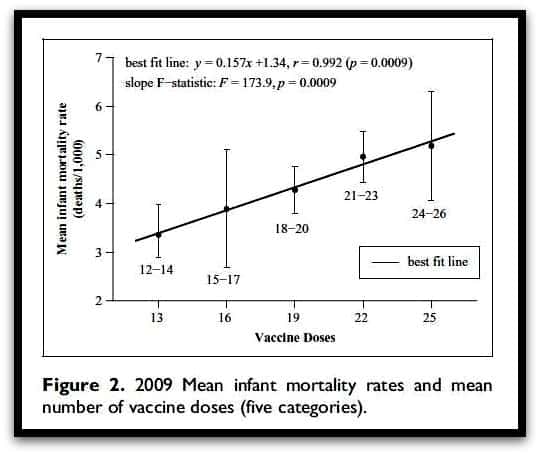 The authors point out in their concluding remarks that before  the widespread practice of infant vaccination in the U.S. during the 1960s, SIDS was virtually unheard of, but by the 1980s was the number one leading cause of infant mortality (from 28 days after birth up to one year). They write:

Prior to contemporary vaccination programs, ‘Crib death’ was so infrequent that it was not mentioned in infant mortality statistics. In the United States, national immunization campaigns were initiated in the 1960s when several new vaccines were introduced and actively recommended. For the first time in history, most US infants were required to receive several doses of DPT, polio, measles, mumps, and rubella vaccines. Shortly thereafter, in 1969, medical certifiers presented a new medical term—sudden infant death syndrome. In 1973, the National Center for Health Statistics added a new cause-of-death category—for SIDS—to the ICD. SIDS is defined as the sudden and unexpected death of an infant which remains unexplained after a thorough investigation. Although there are no specific symptoms associated with SIDS, an autopsy often reveals congestion and edema of the lungs and inflammatory changes in the respiratory system.

In order to address the unacceptable high rates of infant mortality due to SIDS, the American Academy of Pediatrics started a campaign called “Back to Sleep” in order to instruct parents to make sure that their infants slept on their backs, promoting the belief still in force today that a major cause of SIDS can be attributed to placing an infant on her stomach (in the prone position), rather than supine (on her back). As a result, the number of cases reported as SIDS decreased dramatically by 8.6%.

The drop in SIDS rates would seem to indicate that, given other possible factors, at least in terms of unexplained fatalities due to SIDS, sleep position rather than vaccination plays a major role.

The problem, however, is more complex than that and has to do with the way infant deaths were classified in the period from 1990-2001. The number of reported Sudden Unexpected Infant Deaths (SUID) due to “suffocation”, for example, increased by almost 12% during the same period. As Miller and Goldman point out, during the period of decline in reported deaths due to SIDS in the 1990s, there was not only an increase in unclassified deaths or those attributed to “unknown causes” as well as those attributed to suffocation or Shaken Baby Syndrome, but there was also no significant change in the mortality rate for infants ranging from age 28 days through 1 year.

The term SIDS itself, which did not appear until after vaccination programs were in full swing in the United States, has its own questionable history.

“A more blatant example of this reclassification ploy is the label of sudden infant death syndrome (SIDS). As Neil Miller’s book demonstrates, 70 percent of SIDS cases have been shown to follow pertussis vaccination within three weeks. A number of the new vaccines are also associated with sudden infant death. In order to avoid admitting that the sudden stoppage of breathing by a baby within hours to weeks of these vaccines was due to the vaccines, the vaccine defender merely created a new disease and gave it the incredible name of sudden infant death syndrome (SIDS), which is like naming it the ‘Baby Mysteriously Die of Anything but a Vaccine Injury Syndrome’ (BMDAVIS).”

Based on what we know about SIDS, which is a general term that seems to be used by some in order to evade the possibility that vaccines are at least one cause of infant mortality, there are likely many causes. Some of them may even work together, such as the toxic gases that are produced in reused mattresses, or in mattresses that have been treated with flame retardants. Research shows that infants who have been vaccinated increase in body temperature, which can elevate and increase the production of toxicity, which in turn effects the infant’s ability to breathe normally. Fevers that result from vaccines can also deplete the presence of Vitamin C, as well as damage the child’s immune system and nervous system. (Source)

Dr. Robert S. Mendelsohn, M.D., suspects that “the nearly 10,000 SIDS deaths that occur in the United States each year are related to one or more of the vaccines that are routinely given children. The pertussis vaccine is the most likely villain, but it could also be one or more of the others.” (Source)

In the United States, the courts have confirmed such suspicions to the tune of at least $60 Million dollars during the period in which incidents of SIDS were reportedly decreasing (1990-1998).

“The computer records from the National Vaccine Injury Compensation Program, obtained by Gannett News Service using the Freedom of Information Act as part of a four-month study of federal immunization policy, reveal:  Of 253 infant death cases awarded more than $61 million by the U.S. Court of Federal Claims in the 1990s under the compensation program, 224, or 86 percent, were attributed to vaccination with DTP, the diphtheria, tetanus and pertussis (whooping cough) shot. In these cases, mortality was originally attributed to SIDS in 90, or 40 percent, of them. Of 771 total claims filed by parents from 1990 through mid-1998, 660, or 86 percent, contained assertions that DTP was the cause of death. And 43 percent were classified by medical authorities at time of death as SIDS cases.” (Source)

What Can You Do?

Parents who are concerned about vaccinations should of course be diligent in doing their own research and coming to conclusions that make sense to them. More studies should also be conducted specifically seeking to find out what kinds of correlations may exist between vaccines and infant mortality. There are likely a mixture of causes that lead to unexpected infant mortality, including vaccines. Denying the possibility of risk, or the evidence which suggests that vaccines can cause SIDS, at the very least perpetuates problems and controversy, and can only lead to more tragedy.

Do/did you vaccinate your children, yes or no? Why or why not?