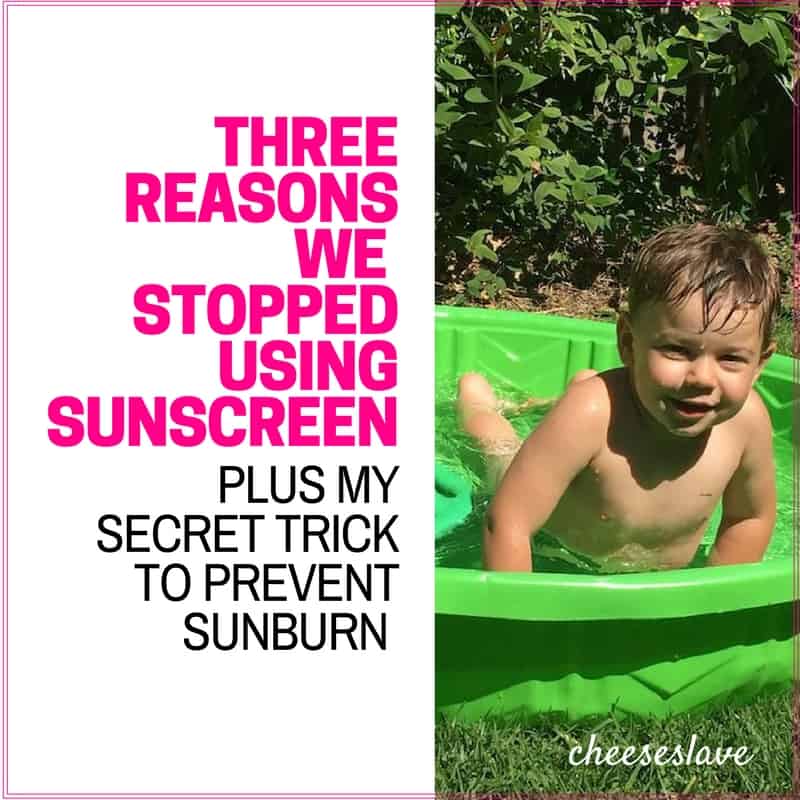 Note: I use affiliate links in my posts which means I earn a small commission if you order. However, I only recommend products I personally use and believe in.

Why We Don’t Use Sunscreen Reason #1: Sunscreen is Toxic

I always wince when I see parents at the pool or beach, dowsing their kids in sunscreen from head to toe. Sunscreen is full of toxic chemicals including: parabens, dioxybenzone, octocrylene, para amino octyl salicyclate, benzoic acid, menthyl anthranilate, phenylbenzimidazole, cinoxate, homosalate, oxybenzone, and methoxycinnamate.

Yikes, right? I don’t know what most of those things are and I don’t want to know. What I do know is chemicals like parabens can cause cancer. Do we really want to be putting this stuff on our skin and absorbing it via our pores? I don’t.

Why We Don’t Use Sunscreen Reason #2: Sunscreen Doesn’t Protect You From Skin Cancer

Do we really need sunscreen to protect us from skin cancer? I mean, does it even work?

Apparently not… or at least there is no evidence that it does. While over 60% of Americans say they protect themselves from the sun (and I always see people loading up on sunscreen), skin cancer is on the rise:

What’s causing the skin cancer if people are using all this sunscreen? Is it the toxic chemicals listed above? Perhaps. Either way, sunscreen doesn’t seem to be working to prevent skin cancer.

Why We Don’t Use Sunscreen Reason #3: Sunscreen Blocks Vitamin D

Skin cancer is on the rise, and so is vitamin D deficiency. According to Scientific American, 75% of children and teens are deficient in vitamin D.

The human body naturally makes vitamin D when exposed to UV rays. Sunscreen blocks the rays that allow us to make vitamin D, which is another reason I don’t like using it. We want more vitamin D, not less!

How We Prevent Sunburn: My Secret Trick

The main reason I stopped buying natural sunscreen is because we never burn anymore. We can stay in the sun all day long and not burn. And this is in Southern California, where we get a lot of sunshine.

My kids never burn. Like, ever. I don’t think Ollie, age 2, has ever gotten a sunburn in his life. And he spends hours outdoors every single day. 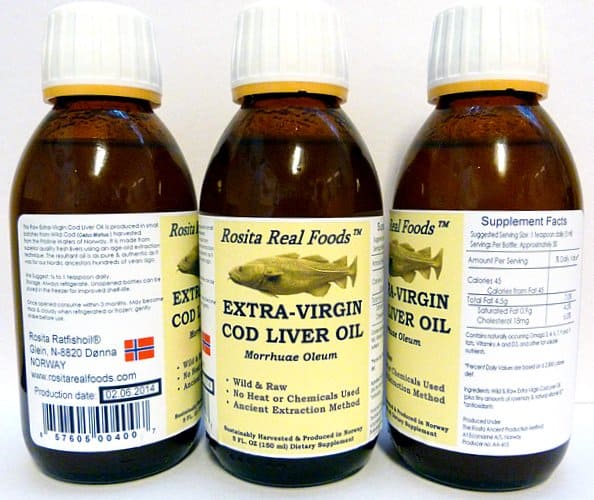 We used to get sunburned back in the days before cod liver oil. But we never do anymore. And I’ve heard from many of my readers to confirm that they have experienced the same thing. When they take cod liver oil regularly, they don’t get sunburned. Even readers who have very fair coloring.

I have researched this and it seems that it’s omega 3 fatty acid in cod liver oil that help to prevent sunburn. There are a number of articles and studies like this one, or this one.

Are There Other Foods That Contain Omega-3s to Prevent Sunburn?

Seafood also contains high levels of omega 3 fatty acid. Grass-fed meats and dairy, do too, but to a lesser extent.

You could also take fish oil. However, I really recommend cod liver oil over fish oil for a number of reasons.

Read my article, The Top 5 Reasons to Take Cod Liver Oil which explains in detail why EVCLO is better than fish oil. Cod liver oil, particularly the EVCLO, has many other benefits above and beyond fish oil, most especially the natural food-derived forms of vitamins A and D.

Furthermore, many fish oils are highly processed and/or rancid. Read my post on The Best Cod Liver Oil: Which Cod Liver Oil Brand Should You Buy?

Can We Just Eat Seafood Instead of Taking Cod Liver Oil?

Absolutely. Seafood contains omega-3s so if you’re eating a lot of it,  you will get enough omega-3s to combat sunburn. I don’t know how much seafood you will need to it to get the same results as cod liver oil… but I would say probably at least 3-4 times per week and possibly daily.

However, for our family, I like the insurance of cod liver oil. My husband and I love seafood and eat it often, but I can’t always get my kids to eat it. My daughter will only eat salmon maybe once a week and I’m still having a tough time getting her to eat seafood. I love tunafish and eat it often, but she doesn’t like it.

Plus, seafood doesn’t have the high levels of vitamin A that cod liver oil does, particularly the extra virgin cod liver oil. EVCLO has more natural (not synthetic) vitamin A than any cod liver oil on the market to my knowledge… because it is one of the only brands that is not heated and refined.

Vitamin A is critical for many things, including eyesight and immunity. For examples, measles is only fatal in populations with vitamin A deficiency.

There is even a pediatrician, Dr. Mary Megson, who has made connections between vitamin A deficiency and the autistic spectrum. She had incredible results with autistic children and cod liver oil. I talk about her work in my article, The Top 5 Reasons to Take Cod Liver Oil.

What If We Can’t Afford to Take Cod Liver Oil?

Many people don’t want to spend the money on cod liver oil because it’s expensive. I personally think you can’t afford not to take it. Most especially for growing children who need omega 3 fatty acids for brain development, vitamin A for immunity and eyesight, and vitamin D for growing strong teeth and bones.

We spent a lot of time in the sun last year, thanks to our EVCLO, and as a result, none of us got sick this winter! Which saved us a lot of money in doctor’s visits, prescriptions, and missed days of work.

I wrote a post a while back about what to do if you can’t afford cod liver oil: Can’t Afford Cod Liver Oil? What to Buy Instead if You’re On A Budget.

You can read the post, but I found that you really don’t save any money when you factor in all the liver and seafood you would have to eat to match the nutrition in cod liver oil. I don’t eat a lot of liver and sardines, and I have a tough time getting my kids to eat these foods, so we stick with the cod liver oil.

I also think cod liver oil is one of the reasons I have such great skin. People are consistently amazed when I tell them my age — they always say I look 10 or 15 years younger than I am. (I have no proof of this, but since I know omega 3s protect our skin from sun damage, I really think there’s something to the idea that omega 3s help slow the aging process.)

You can’t buy Rosita EVCLO in stores but it is available online.

I used to take the EVCLO liquid but have started taking the EVCLO capsules because it’s easier for me to remember. I just take 4 capsules per day, which is about the same as half a teaspoon.

Pin This Post: 3 Reasons Why We Don’t Use Sunscreen… And My Secret Trick to Prevent Sunburn