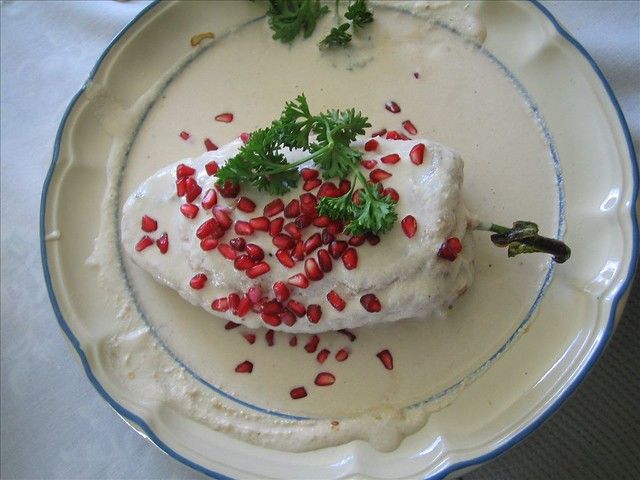 It’s pomegranate season, and this meal is a great way to celebrate them. Chiles en Nogada (pronounced “chil-eez en no-GA-dah”) is a Mexican dish consisting of spicy poblano chiles stuffed with a sweet meat mixture topped with a creamy walnut sauce and garnished with parsley and pomegranate seeds.

This recipe was featured in Laura Esquivel’s novel from 1990, Like Water for Chocolate

. The white sauce, green parsley, and red pomegranate seeds are meant to symbolize the Mexican flag. The combination of tastes — hot pepper with salty pork, sweet pears and raisins, and the cool walnut cream sauce — is complex and delicious.

Poblano peppers, or chiles, are commonly found in most grocery stores these days, but unfortunately are often incorrectly labeled pasilla chiles, which are a dried red chile.

The hardest part of this recipe is peeling the walnuts. You might want to get some helpers since it is a little bit time consuming (although very easy).

by Marilyn Tausend with Miguel Ravago.

1. Soak the walnuts: Place the slivered walnuts in a mason jar or glass bowl. Sprinkle 1/2 teaspoon of sea salt on top. Pour some warm filtered water over top of the walnuts, and stir to dissolve the salt. Cover and put in a warm place to soak for 7 to 10 hours.
2. Dry for 12-24 hours in a dehydrator or in the oven on low heat (for more information on soaking nuts, see Sally Fallon’s cookbook, Nourishing Traditions).
3. Make the walnut sauce: Several hours in advance (or the day before), place 1 cup of the soaked and dried walnuts
in a small pan of filtered, boiling water. Remove from the heat and let sit for 5 minutes. Drain the nuts and allow to cool. With your fingers, rub off as much of the dark skin as possible. Chop into small pieces with a chef’s knife,or pulse in a food processor.
4. Place the walnuts, cream cheese, sour cream, and sea salt in a food processor or blender and puree thoroughly. Stir in the optional sugar, cinnamon and sherry. Chill mixture for several hours.
5. Cut the meat into large chunks and place into Dutch oven or stock pot.
6. Quarter the onion and add into the pot along with the garlic cloves and sea salt. Cover with the 3 cups of chicken or beef
stock and bring to boil over medium heat.
7. Skim off any foam that collects on the surface. Lower the heat and simmer for about 45 minutes, until the meat is tender. Remove the pot from the heat and allow the meat to cool in the broth.
8. Remove the pieces of meat and finely shred. Reserve the broth for another use.
9. Make the picadillo: Heat the lard or tallow in a large, heavy skillet. Peel and chop the onion and finely mince the garlic. Saute over medium heat until lightly golden. Stir in the shredded meat and cook 5 minutes. Add the cinnamon, black pepper and cloves.
10.Chop 2 tablespoons of the walnuts and add them to the skillet along with the raisins and chopped dried pineapple or dried apricot.
11. Peel and chop the apple and pear. Add to the skillet and stir to combine.
12. Peel and chop the fresh tomatoes or open the can of tomatoes and add it to the skillet along with some sea salt to taste and continue to cook over medium-heat until most of the moisture has evaporated. Stir occasionally to prevent sticking. Allow picadillo to cool. Cover and set aside, or if making the day ahead, store in the fridge.
13. Prepare the peppers: Rinse the chile peppers and make a slit down the side, just long enough to remove the seeds and veins.   Keep the stem end intact.
14.Roast the chiles by placing them directly over the flame of a gas grill (or broiling in the oven) blistering, and charing on all sides.
15. Place the chiles in a paper bag, seal, and let sit for 5 minutes.
16. Using your hands, rub off the skin and rinse under water. Let drain on paper towels. Cover and set aside.
17. Preheat the oven to 250 degrees. When ready to serve, reheat the meat filling (picadillo), then stuff the chiles with it until plump and just barely closed.
18. Place the filled chiles onto a baking sheet or in a casserole and put into the oven.
19. After they are thoroughly heated, place the chiles on a serving platter, cover with the chilled walnut sauce.
20. Chop the parsley or cilantro and remove about 1/2 cup of pomegranate seeds from the pomegranate. Sprinkle over the chiles and sauce.