How To Render Lard & Tallow 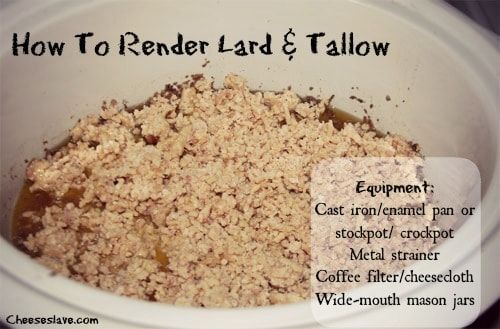 Rendering lard or tallow at home may sound intimidating, but trust me, rendering these fats is the easiest thing in the world. And once you’ve tasted pastry made with lard or French fries cooked in tallow, you’ll be hooked.

If you read my blog with any regularity, you know I’m a big fan of lard and tallow. Rendering lard is easy, and it’s the same process for beef tallow. I learned how to render lard and tallow for pie crusts.  I also use it for frying chicken nuggets and fried chicken, onion rings and French fries, and plan to try my hand at doughnuts and potato chips.  Oh, and let’s not forget about buttermilk biscuits… I’ll be making those soon.

Did you know lard was the traditional fat used in China and Japan and in Mexico and throughout Central and South America? Mmm… won tons, egg rolls, fried rice, tempura, refried beans, tamales. There are so many delicious things to make with lard and tallow.

McDonald’s actually used beef tallow for their French fries up until 1983, when they finally succumbed to soybean oil. Tallow (horse and beef) is the traditional fat used for French fries in France.

Foods made with these fats are not only yummy, they’re also very healthy.

What Is Lard? What Is Tallow?

Soybean, corn, cottonseed and canola oil are all oils with a high smoke point. They’re also very cheap to manufacture, and a convenient way of using up industrial waste. Of course this is why they are so ubiquitous in our food supply. Most processed foods use these oils, and restaurants use them for frying.

However, soybean, corn, cottonseed and canola oil are not good for you for a number of reasons. For one thing, they lack the fat soluble vitamins that are available in lard and tallow from animals on pasture. They are also typically rancid even before they are used for cooking. Not to mention the fact that these oils are almost always made with genetically modified crops.

One hundred years ago, lard and tallow were used for cooking in every American home and restaurant. They were the most commonplace cooking oils. And heart disease was unheard of. Now it’s our number one killer.

According to Sally Fallon Morell, the first recorded heart attack in America was in 1921 (Source: Local Forage). Just 10 years after Crisco (hydrogenated cottonseed oil) and 50 years after margarine (clarified vegetable fat) were introduced to the American people. Hmm… coincidence?

To read more about the history of cooking oil and disease in America, you can read The Oiling of America online.

There are many health benefits associated with eating lard and tallow. Too many to list here. To summarize very briefly, saturated fats like lard and tallow:

Source: The Oiling of America

Why Learn How to Render Lard & Tallow?

Maybe you’ve seen lard on the supermarket shelf. Couldn’t you just pick up a container of that? I don’t recommend it. Why? Because it’s partially hydrogenated, which means it’s full of trans fats, which are known to cause heart disease and cancer. Exactly what we are trying to avoid.

It’s also important to use the fat from animals on pasture — that lard at the supermarket is made from animals in confinement.

So look for fat, or suet, from animals that have been “grass-fed”, and buy suet from pigs who have been raised humanely outdoors. Remember, if the animals are not eating well and soaking up sunshine, they’re not going to have those valuable fat soluble vitamins stored in their fat. Which means you won’t get the health benefits listed above.

How To Render Lard & Tallow

If you want to learn how to render lard & tallow, I can’t stress how easy it is.

There are three ways to do it.  All of them work well. I happen to like the crock pot method the best. No open flame on the stove, and it’s nice on a hot day when you don’t want to heat up your house by running the oven. Best of all, you can set it and forget it.

How long does it take when you’re rendering lard and tallow? It depends on how big of a batch you are making. For about a pound of fat, it should take anywhere from 1-2 hours.

When you strain the fat, the liquid will be golden at first, but it will harden and the change to white (for lard) to a cream color (for tallow)

Grass-fed beef, lamb, bison or pork fat — also called suet, ground (I use a food processor to grind mine — you can use larger chunks of fat cut up by hand but it will take longer; sometimes the farmer will sell it to you pre-ground — for sources of grass-fed beef, bison, lamb and pork fat — where to buy fats
Optional: Water (1/2 cup per pound)

Method 1: How to Render Lard & Tallow on the Stovetop

1. Place the pan on the stove.
2. Add the ground fat.
3. Add the water (optional).
4. Set the heat on the lowest possible setting. Cover and let cook, stirring occasionally.
5. Cook until you’re left with mostly clear or golden liquid with bits of hardened stuff on top.
6. Remove from heat and strain into a mason jar through a metal strainer lined with a coffee filter, paper towel or cheesecloth.

Method 2: How to Render Lard & Tallow in the Oven

1. Preheat the oven to 200 degrees.
2. Place the fat into the pan.
3. Add the water (optional).
4. Cook until you’re left with mostly clear or golden liquid with bits of hardened stuff on top.
5. Remove from heat and strain into a mason jar through a metal strainer lined with a coffee filter, paper towel or cheesecloth.

Method 3: How to Render Lard & Tallow in the Crockpot

1. Place the fat into the crockpot.
2. Add the water (optional).
3. Set the crock pot on low heat.
4. Cook until you’re left with mostly clear or golden liquid with bits of hardened stuff on top.
5. Remove from heat and strain into a mason jar through a metal strainer lined with a coffee filter, paper towel or cheesecloth.