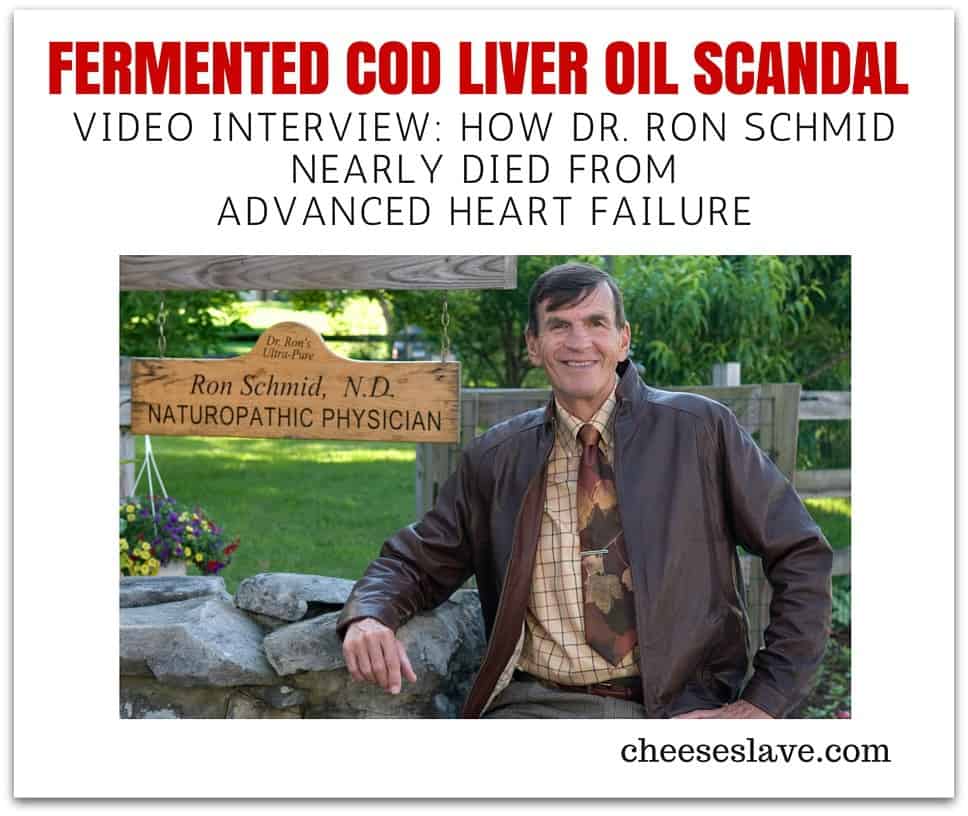 This is the second video in the Fermented Cod Liver Oil Scandal interview series.

In 2012, Dr. Ron Schmid was hospitalized for advanced congestive heart failure and given 3-6 months to live. In this video, he explains why he believes it was the fermented cod liver oil he had been taking that caused his heart failure.

Dr. Ron says it was Dr. Kaayla Daniel, former WAPF Vice President and whistleblower that gave him the courage to tell his story. In August, 2015, Dr. Daniel published a report with the data from 5 independent labs that show that the fermented cod liver oil is rancid, contains trans fats, and is made from pollock.

Dr. Ron and Dr. Kaayla have since been ostracized by the Weston A. Price Foundation and attacked by many in the organization for coming forward with this information.

Dr. Ron Schmid is a naturopathic physician, owner of a supplement company, Dr. Ron’s Ultra-Pure, and the author of two books, The Untold Story of Milk and Primal Nutrition: Paleolithic and Ancestral Diets for Optimal Health. He was also a longtime member, sponsor and honorary board member of the Weston A. Price Foundation, which actively endorses the Green Pasture Products fermented cod liver oil.

Check Back Tomorrow for Another Video in the Series

This is the second in a series of video interviews about the potential hazards of fermented cod liver oil.

Check back tomorrow for the next video, my interview with Cathy Raymond, longtime WAPF member and staff member of WAPF and FTCLDF. Cathy shows her shocking before and after pictures of a head-to-toe skin rash. She was rushed to the emergency room and the dermatologist told her the rash was caused by the fermented cod liver oil she was taking. Cathy also tells the shame she felt when she was pushed out of the Weston A. Price Foundation after she spoke up to try to include more Paleo members.

Read More About The FCLO Scandal

To learn more about the history of the FCLO scandal and get my take on it, please read my post, My Take on the Fermented Cod Liver Oil Scandal.