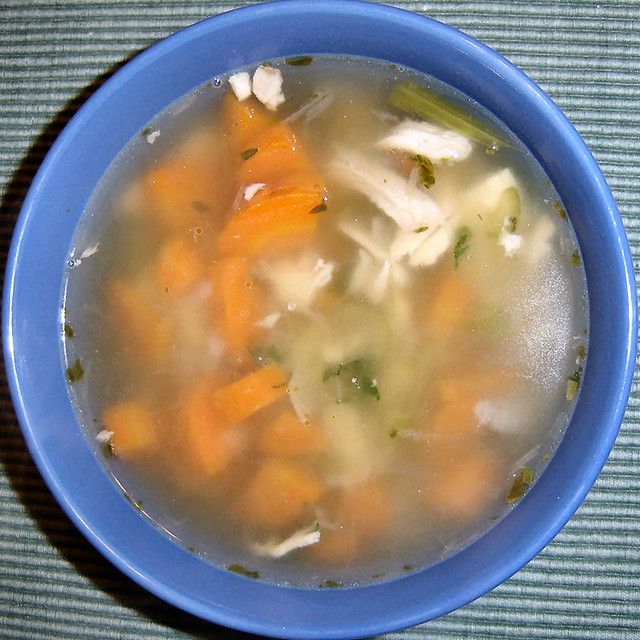 Today is the first day of GAPS Intro for our whole family.

Kate cried real tears when I told her she couldn’t have milk. But then at lunch, she ate a big bowl of chicken soup like a champ. An hour later, she asked for another bowl and ate the whole thing.

If you’re not familiar with the GAPS diet, it stands for Gut and Psychology Syndrome. It’s a diet created by Dr. Natasha Campbell McBride, author of the book by the same name. She’s a neurologist and pediatrician practicing in England. The diet is based on SCD, or the Specific Carbohydrates Diet. It’s a healing diet that helps people recover from all kinds of ailments — from food allergies to ADD/ADHD to autism to asthma.

Dr. Campbell McBride healed her son of autism. Which is pretty darn impressive. How does it work? Dr. Natasha says that she has never seen an autistic child who did not have major digestive problems. The GAPS diet was designed to heal and seal the gut lining, and help to rebuild the good gut flora. It’s lots of bone broth (very healing; helps to rebuild the gut lining), easy-to-digest foods like meat and fish; healthy animal fats; and fermented foods and probiotics.

I healed my gut when I was in my twenties. I didn’t have the GAPS diet back then, but I did something similar and I worked with a doctor who gave me strong probiotics. It took me about two years to heal back then but I did reverse my arthritis, chronic fatigue syndrome, constant sinus infections and seasonal allergies. I bet I would have healed faster on the GAPS diet — I wish it had been around back then. But at least we have it now, thanks to Dr. Natasha.

Why Are We Doing the GAPS Diet?

The main reason is for my husband, Seth. We tried doing GAPS back in 2008 when I first heard about it. He tried, but he was not really committed. I don’t blame him. It’s not an easy diet to commit to. But he just got his allergy tests done and it turns out he’s allergic to gluten, dairy and eggs. We’ve known for years that he had allergies (that’s why we did GAPS in 2008) but sometimes seeing it in black and white makes you more motivated to change. He also found out from the tests that he has a candida overgrowth, and he is hypothyroid.

Another reason we’re doing GAPS is for my daughter Kate (she’s 4). She has become something of a picky eater. I’ve heard so many stories about people who have picky eaters who magically start to eat anything after they do GAPS.

Kate has a sweet tooth the size of Kansas. She also craves carbs — bread, pasta, potatoes. She’ll eat most kinds of meat and some kinds of fish (only shrimp, Bay scallops, lobster, king crab, and clams). But only if she gets her starch. And forget about organ meats. (She loved liver until she turned two. She even tolerated liverwurst from two to three and a half. Lately it’s been impossible for me to get her to eat any of it.)

I decided a few days ago that we would start on October 1st. Cara over at Health, Home & Happiness is doing a GAPS Intro Challenge starting on the 1st, so I felt like it was a great time to make a run for it.

Life has been hectic lately, to say the least. We’re in the middle of moving from Los Angeles to Las Vegas. We got back last night from looking at houses in Vegas and I woke up this morning and said, “Today’s the day.” I guess because I looked in the fridge and saw that we were down to a quart of milk. I had to go shopping anyway (we were in New York for two weeks before we left for Vegas). So I said to myself, Let’s just go ahead and get it over with.

I have two batches of chicken broth going — one in the crock pot and one in the stock pot on the stove. I’ll start two more batches tomorrow.

Seth has been feeling like crap all day. He took two detox baths (with baking soda) and it helped. Kate has pooped twice today — both times she had diarrhea. Her body is getting rid of pathogenic bacteria. It just shows you how healing this diet is. It starts working right away.

One of my Facebook readers pointed out that roasted meat is not allowed until Stage 4. That’s absolutely true, but you see, I am not totally prepared to do GAPS so we’re just doing the best we can. (I was going to roast a duck so I could get more duck fat from it, but then it was still frozen so I scrapped that idea; I’ll roast it tomorrow.)

I also screwed up because I added celery to the chicken soup, which, if you read closely, is not allowed on Stage 1. Too fibrous, even when cooked. Oh, well. Lemon is also not allowed on Day 1. I had to add lemon to the carrot soup because I’m using fish stock (that was all I had in the freezer) and I have to disguise the slightly fishy taste if I want my family to eat it.)

And another cheat — Kate had some coconut water. I know, I know, illegal on Intro. I’m setting a bad example. 🙁

You know what, though? This made me realize something important. So many people never get started because they’re afraid they won’t do something perfectly. Maybe you want to start a business or move to a new city or find a boyfriend — or do the GAPS Diet. But it’s hard and you’re not sure if you can do it right. So you just keep putting it off.

I’m the kind of person who, when something strikes me, I just have to do it right away. I can’t wait a day or a week. I gotta go!

So this GAPS diet journey will be far from perfect. We’re going to do the very best we can and that will have to be enough. I really feel like it’s better to get started and do something than to wait in the hopes of being perfect — but then never actually getting started.

I’ve decided to keep a FitDay journal so I can share what I’m eating each day. I hope it helps those of you out there who are doing GAPS or planning to get started. I’m not sure if I’ll post my food log every day on here, or just once a week. I’ll post as often as I can.

The FitDay program is neat because you can keep track of how much fat, protein and carbohydrates you’re getting each day. I know a lot of people worry about eating enough fat, and I’ve heard a lot of folks complain that they are starving on the Intro Diet. Dr. Natasha says you need to eat 40% fat on the diet. So far I’ve been eating just over 50% fat on the diet and I haven’t been hungry at all.

I posted what I ate today below. And here is the link to my FitDay journal.

If you’re feeling hungry on the Intro Diet, try adding a tablespoon of duck fat to every cup of broth or soup. When you’re doing Intro, you can’t have butter (dairy) or coconut oil (coconut oil is antibacterial and can cause die-off so you can’t eat too much). Duck fat makes the broth taste really good and it’s a great way to boost the fat. It’s really easy to render your own duck fat: just roast a duck and save the fat from the roasting pan.

Are you on the GAPS Diet? Or planning to start? What are you experiencing? Are you struggling? Have you seen any benefits since you started? Are you planning to start but have fears of how hard it will be? Please share your thoughts below.