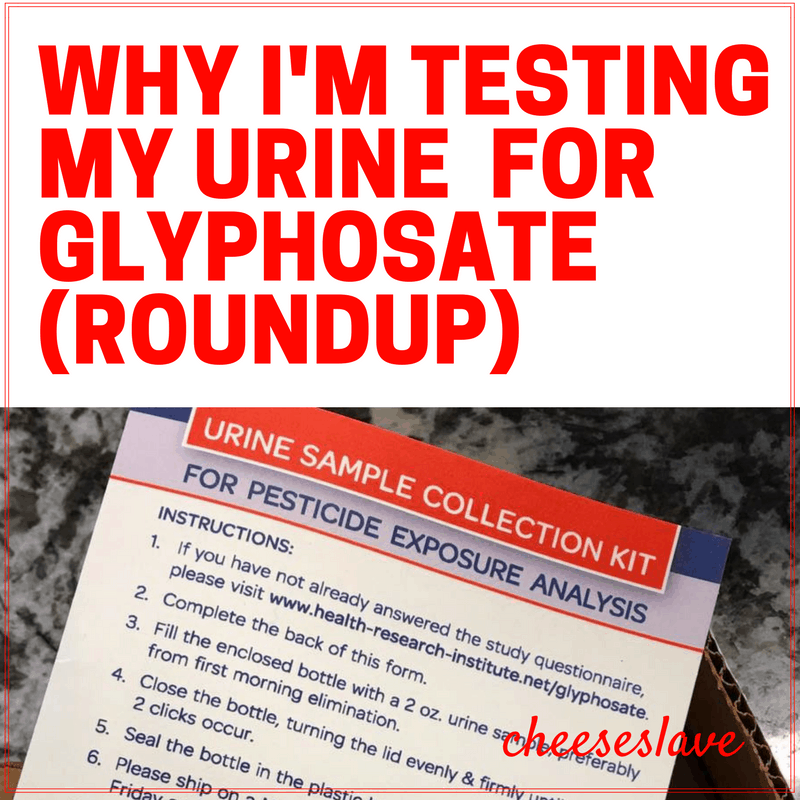 Why I’m Testing My Urine for Glyphosate

This morning I took a urine test to find out how much glyphosate is in my urine. In this post, I’ll explain why, how you can test your urine yourself, and share some exciting news about a new supplement that may actually remove glyphosate from the gut.

Why I’m Testing My Urine for Glyphosate

I have been having some of my old symptoms back again lately. They have been slowly increasing over the past few months.

Here are my symptoms: Itchy, watery eyes; sneezing and itchy, runny nose; phlegm and drainage; having trouble breathing and walking up stairs (I get very easily winded); fatigue.

I’m wondering if this has something to do with my gut flora. You see, these are the exact same symptoms I had when my gut flora was damaged in my 20s. (Read the post about how I cured my rheumatoid arthritis by rebuilding my gut flora.)

Fast-forward to today — my symptoms are back. Akkk! I’m sneezing like crazy, my nose is running, and my eyes water constantly. I’ve been feeling great for the past decade — with no symptoms. No allergies or respiratory problems, no fatigue. What’s causing this?

Could It Be… Glyphosate?

I have a hunch that it could be glyphosate in GMO foods that might be damaging my gut flora.

In case you don’t know what glyphosate is, it’s the herbicide/pesticide in Monsanto’s weed killer, Roundup, as well as in GMO foods (in other words, many foods we commonly eat on a daily basis).

We now know that glyphosate kills our good gut flora. Just as antibiotics kill gut flora, pesticides like glyphosate also kill living things, including the bacteria in our digestive tracts.

According to the Cornucopia Institute (an organization I trust for accurate information):

A similar study found that glyphosate was toxic to beneficial bacteria in cattle, and hypothesized that glyphosate residues on cattle feed may predispose cattle to infection by Clostridium botulinum, the bacterium that causes botulism.” [Source]

1.) I haven’t taken any antibiotics or other drugs would kill gut flora.

2.) I have been eating more “conventional” (non-organic) food lately… much more than I normally do. Especially over the past couple since we’ve been moving and we no longer have a nanny. Because I’ve been spending so much time on the move and getting acclimated in our new homeschool group, I haven’t been cooking as much and we’ve been eating lots of take-out food. I’ve also eased up lately and been eating stuff here and there like conventional Raisin Bran and non-organic muffins.

3.) Since we moved into our new house at the end of July (2 months ago), I’ve been using unfiltered tap water to cook, in my ice cubes, and to make coffee every day (although I do drink organic coffee). I’m planning on installing a whole-house filter but we need to wait to sell our old house before I do that (due to the cost). This is probably less of an issue (from what I have read there is less glyphosate in tap water than in food) but it is cumulative, so I wanted to document it.

4.) I stopped taking my regular probiotic, Gutpro a few months ago. Things got crazy this summer with our move and I ran out. So I haven’t taken a probiotic since May.

5.) I just found out that the city is spraying glyphosate in my new neighborhood.

Weirdly enough, the intersection she posted is one block away from our new house. My friend made some phone calls and updated her post, and yes, she called and it turns out our city is spraying Roundup, and has done so for years and years (they say they just don’t do it near schools).

I don’t know if they sprayed glyphosate in my old neighborhood. Could I be reacting to glyphosate “drift” in the air? Could it be in our water? I don’t know. But it’s worth mentioning.

A New Supplement Claims to Remove Glyphosate from the Gut

I’m starting this supplement today (I took it after I did the urine test) and will do a second urine test in a month to see what happens. I will post about my results in mid-November after I get the test results back.

Why This Supplement Is Unique

In an upcoming post, I’ll go over all the ingredients in great detail (for those of you who are detail-oriented, like me) and why I’m so excited. As my regular readers know, I’m very suspicious and critical of most supplements, and am not easily impressed.

I’ll also write about my personal experience taking it. If this product really does work to remove glyphosate from the gut and help grow the villi, I will continue to take this on an ongoing basis… since we are constantly exposed to glyphosate in the environment (sorry, but I’m NOT gonna stop eating out at restaurants!) I will also be giving this to my kids and husband. (Note: I plan to use this new probiotic in conjunction with Gutpro, my regular probiotic… for a number of reasons which I will elaborate on in a future blog post.)

In brief, it contains three ingredients that are very exciting:

1.) HumicSure (TM), made from humic acid and fulvic acid, this is a mineral compound that absorbs and removes glyphosate and other pesticides and heavy metals and other toxins like a sponge, and carries them out of the digestive tract.

2.) PrebioSure (TM) (made by GCI, the same company that makes HumicSure), an ingredient that helps grow the villi and microvilli in the gut, which strengthens the mucosal lining and helps grow the microvilli which is what secretes enzymes to help us digest our food. (It normally takes, on average 1-3 years to regrow microvilli — it took me 2 years on therapeutic grade probiotics to recover from gluten intolerance. Read my post: Yes, You Can Reverse Food Allergies: How I Did It.)

3.) LactoSpore (R), a probiotic made from Bacillus coagulans. This contains the same strain used in one of the formulations I currently recommend (I’ll go into more detail on this in an upcoming post.)

Note: The second ingredient, PrebioSure, is made from wheat germ which works as a prebiotic — but before you freak out about gluten, let me explain. This product is an extract of wheat germ, not wheat germ itself. According to GCI, the company that makes it, it is gluten-free:

PrebioSure is based on several years of research and development of a proprietary enzymatic extraction of biologically active compounds from non-GMO and organic food grade wheat germ, which is also gluten-free, gliadin-free, and fructon-free. [Source]

So Biome Medic is safe for people who react to gluten. (Yes, I will be giving this to my husband who is gluten-free.)

How To Test Your Urine for Glyphosate

The first 2 labs I checked out didn’t allow me to buy 2 kits (I need one for the before test and one for the after test), so I went with the third lab, Health Research Institute Labs.

If you want to test your own urine for glyphosate, just click this link. (I’m not an affiliate or anything — just wanted to give you guys the info in case you are interested in doing this yourselves.)

It costs $99 per test, which includes shipping, so you don’t have to mess around trying to find stamps. All you do is pee into a cup first thing in the morning, then seal everything up according to the instructions, fill out the paper that comes with it, and toss into a mailbox. They also have you take a short online survey — so they can crowdfund the test results.

So far, they have been really great in terms of customer service. I emailed and told them I am going to blog about my experiment and I have gotten emails back from them saying they will rush my test results so I can post about it sooner.

They also said their scientists will be available to answer any of my questions. If the supplement works to remove glyphosate, I’m thinking I may see more glyphosate in my urine… not sure… we’ll see what they say.

Note: In the instructions that come with the kit it says you should ship it on a Monday or Tuesday. The person I corresponded with said that is not necessary — they wrote these instructions as a precautionary measure but have since discovered that glyphosate in urine remains very stable and it is not necessary to freeze it or rush the shipping.

Got Questions? Ask Below

If you have any questions please ask in the comments below. Also, please let me know if you decide to test your urine — or if you try the new supplement. I’m curious to hear other people’s experiences.

Pin This Post: Why I’m Testing My Urine for Glyphosate