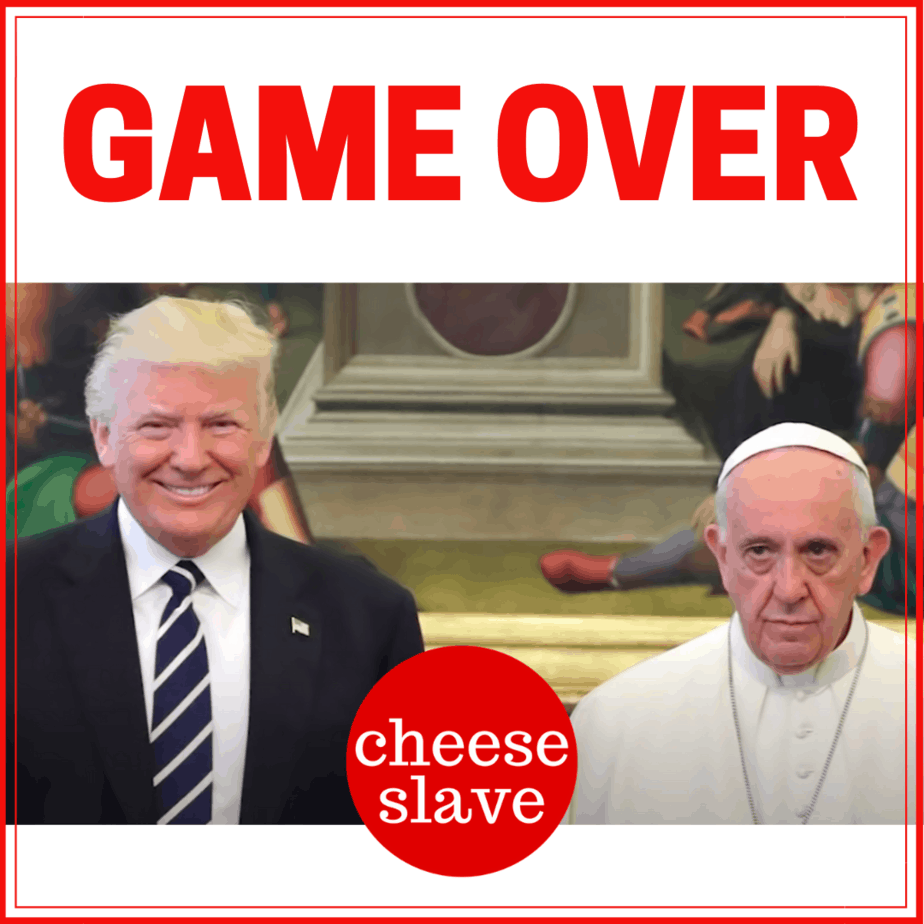 If you’re freaking out about the state of the world right now, you really don’t need to worry. We already won the war. In this post, I’m going to show you the proof.

If you don’t know what war I’m talking about, it’s the war with what President Trump calls the “hidden enemy” or “invisible enemy”.

To learn more about this war we are in, which is the second American Revolution and also the third world war, you can go back and read some of my earlier posts: What Is Q and QAnon? and Why I’m Writing About Politics These Days.

Watch this video, Game Over: The Level Playing Field by Bonfire Guy:

If for some reason that video disappears, you can watch it on Rumble:

I subscribed to Bonfire Guy’s channel because he has a bunch more videos which I will be watching while I work on organizing my kitchen pantry today.

I promise to post about that soon — once we get through this storm.

I’m doing the home edit organization which you can read about in this book: The Home Edit: A Guide to Organizing and Realizing Your House Goals. I think a lot of people stuck at home are doing the exact same thing because The Container Store was LIT yesterday.

Let me tell you why I love this video and whet your appetite….

Summary of the Video

Okay, so let me walk you through a quick summary of this video in case you don’t have time to watch yet… and also give you a few of my thoughts and reactions.

Background on This Video

This video uses the audio from Charlie Freak and I’m pretty sure Charlie got it from a Twitter thread from 3Days3Nights. I can’t link to them because they’re no longer around but they are anons I’ve been following for a while.

I watched a different version of this video over six months ago.

Anyhow, whatever, it doesn’t matter because it’s a very well done video in that it lays out the information very well.

What Does “Game Over” Mean?

Game over means you lose. It’s a video game term that means the game ended and you lost.

Q gave us multiple drops with the phrase GAME OVER:

Highlights From the Video

Let’s walk through the video briefly…

I’m just going to show you a few highlights. Then go watch the video — it’s awesome. Really puts the puzzle pieces together.

Basically what he is saying is it’s GAME OVER because we already got all our allies and they all submitted to Trump and the Q Team back in 2017 and 2018.

He walks through the timeline and it all makes perfect sense.

Trump and his team went to all the power centers of the world and showed them the goods they had on them — all the evidence of human trafficking, cannibalism and sexual perversion. He made deals with them and they joined as allies.

If you weren’t watching the news during Trump’s first term, it’s all very easy to verify. Just go back and pull up the articles and videos.

But they are clearly the biggest side with the most money.

The video starts with the House of Saud. Q told us this was the first side of the pyramid they took down.

Here is President Trump dancing in Saudi Arabia (you will see why this is significant when you watch the video):

As you can see from the Q drop, the House of Saud is the biggest side.

I don’t know what all of this code means:

If you haven’t yet, go read the Executive Order President Trump signed on human trafficking and human rights abuses in December of 2017: Blocking the Property of Persons Involved in Serious Human Rights Abuse or Corruption.

President Trump then went to Israel to meet with Benjamin Netanyahu.

Ha ha! Just look at these screenshots from the video of President Trump and Pope Francis.

Francis doesn’t look too happy, does he?

By the way, just so you know, I am a Catholic and I am a Christian. I love the Catholic faith. But I am no fan of Francis. He’s a fake Pope.

Trump left Rome and flew to Brussels to meet with NATO. You can see by his shit-eating grin in the video that he was #winning.

The video then tells the story of the 2017 Las Vegas shooting which was a assassination attempt on Saudi Crown Prince Mohammed bin Salman.

Prince Mohammed bin Salman then goes to visit President Trump at the White House in March 2018.

After that, Prince Mohammed bin Salman goes to meet with all the US tech overlords. Very interesting…

Here is is at Apple:

Interestingly, Google founders, Sergey Brin and Larry Page “stepped down”  on December 3, one day after Q posted this drop on December 2, 2019:

I find this particularly compelling because I was getting heavily shadowbanned on Google and I lost 90% of my income in the summer of 2019.

In March of 2020, I noticed things changing on Google. Suddenly you could find a lot more memes, photos, and stuff that had been censored. And the week the storm hit (Ides of March,) we all saw crazy Easter Eggs.

I can explain more later but suffice it to say, we geeks knew something was going down.

Patriots were in control. And I believe they still are. We are watching a show.

Who Are The 13 Families Who Ruled the World?

OK so who are the 13 families that used to rule the world? In the video, he shows this screenshot:

And yes, I say ruled (past tense) because as you will learn by watching Bonfire Guy’s video above, it’s GAME OVER.

Watch this series on YouTube: BLOODLINES: The History of the Deep State.

It is a 19-part video series which will ultimately be 45 videos. We got the last installment in May, 2020.

Bill Gates is just one of the many people I am seeing in the news lately. Why are they getting vaccinated? We don’t know but it’s very interesting.

Look who else got the vaccine… Hank Aaron. He died a couple weeks later.

Here he is posing with Deep State operative and CIA Director John Brennan:

Will Bill Gates be next?

Q told us about “Rommel deaths.”

We also saw the death of Larry King this week. You can do your own research on him. It’s not pretty.

As Juan says, we are watching the Book of Esther play out.

And check it out, ya’ll — that story has a happy ending:

So they hanged Haman on the gallows that he had prepared for Mordecai. Then the king’s wrath subsided. (Esther 7:1)

All Over The World

But hang in there guys (whoops see what I did there Gallows… HANG IN THERE). Hahaha!

Because soon, we will be dancing in the streets, literally all over the world. A global party.

I’m already celebrating. In fact, I’ve been celebrating since March 2020 because I know what’s coming.

It will be just like this scene in The Wizard of Oz:

We’ll be celebrating because the witches and warlock will all be dead.

If you want to dance with me, get my Spotify playlist: Q: #GreatAwakening.

And if you don’t feel like dancing yet, because you’re still uncertain… listening to these songs will really help to get your vibe up if you’re feeling scared or anxious.

I listen to this playlist at the grocery store while everyone’s walking around in the masked doom and gloom and there I am, bopping around, vibing so high, they don’t even bother me.

In fact, when my vibe is really high, I start to realize they don’t even notice me. Like they literally cannot even see me. I’m not on their wavelength.

Here’s one of my favorite songs to get my vibe up:

My 6-year-old son, Ollie, and I love to dance to that Justin Timberlake song.

One of our other favorites is Candlelight, the story of the Maccabees who defeated the Greek pagan rulers (same 13 bloodline families). He loves to act out the sword and shield part.

And when I’m dancing around the supermarket, I can even pull my mask down to my chin and they don’t say anything anymore.

Try it sometime and tell me your results. So fun!

Don’t Bring Me Down, BRUCE!

Ha! I gotta end this post here but I want to add one more thing:

I’m listening to my Q playlist as I write this post and look what just came on as I was typing that — so perfect:

I just looked up the lyrics of this song and Wikipedia says:

“A common mondegreen in the song is the perception that, following the title line, Lynne shouts “Bruce!” In the liner notes of the ELO compilation Flashback and elsewhere, Lynne has explained that he is singing a made-up word, “Grooss”, which some have suggested sounds like the German expression “Gruß,” meaning “greeting.” Lynne has explained that originally he did not realize the meaning of the syllable, and he just used it as a temporary placekeeper to fill a gap in the lyrics, but upon learning the German meaning he decided to leave it in. After the song’s release, so many people had misinterpreted the word as “Bruce” that Lynne actually began to sing the word as “Bruce” for fun at live shows.”

That is so funny because we used to listen to this song when I worked as a web developer at my first job at CKS in Cupertino (across the street from Apple). We were non-stop meme-ing, listening to music, quoting movies.

Our boss, the Director of Production, was named Bruce Maurier.  All of us nerds used to say to him, “Don’t bring me down, BRUCE!”