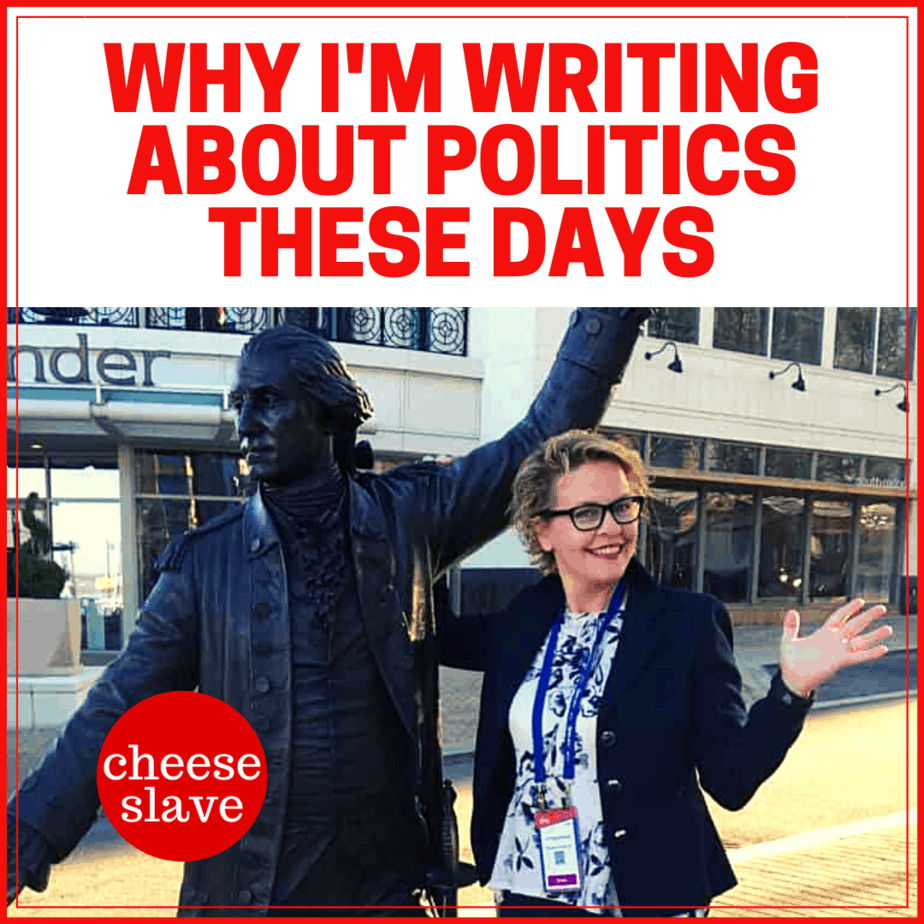 Why I’m Writing About Politics These Days

People keep asking me why I’m writing about politics now instead of food. On Facebook, as they announce that they are unfollowing me, they say with disdain, “I thought this was supposed to be a page about cheese.”

Why in the world would I be writing about cheese at a time like this?

Don’t worry, I’ll go back to writing about cheese one day. My goals for the future involve a lot of travel, touring cathedrals and castles, and writing books about the true history of our civilization — not the lies and misinformation we have been fed. And yes, I’ll be eating a lot of cheese as well.

But for now, I need to focus on the heart of the issue. Food is not the problem we face. Our food supply is only a symptom. As is our failing health. The real issue is the Deep State.

I have never been afraid to take on the tough subjects from the dangers of vaccines, fluoride and GMOs, as well as politically hot topics like the health benefits of raw milk.

While other bloggers shied away from politics so as not to “rock the boat”, I felt that my readers deserved the truth, even at my own personal cost.

And my dedication to telling the truth has cost me a lot. My blog has been almost completely destroyed by Google’s censorship and the blog network I spent years building was decimated, which I now believe was probably orchestrated by Deep State insiders. The pharmaceutical companies and chemical companies don’t like it when you tell the truth about them.

In this post, I will share with you how I came to be a conservative in the past few years, after spending a lifetime as a left-wing Democrat.

Why I Broke Up With Bernie & Fell in Love With Trump

I was a straight-ticket liberal Democrat for 30 years — ever since I started voting at age 18.

I supported Bernie Sanders in the 2016 election, as most of my friends here in California did. I even voted for him in the primary… and then he told us all to vote for Hillary Clinton.

I had done a lot of research on Hillary, and what I found was horrifying. Haiti, Benghazi, the 33,000 emails, her history of covering up for Bill’s history of rape and assault. No way in hell was I gonna vote for her. I smelled a rat.

So I decided to research everything, to read every publication, watch every news outlet. Literally everything. I spent the rest of 2016 leading up to the November election eating, drinking and breathing political news. I went down every rabbit hole.

I devoured news from the entire spectrum of politics, from left-leaning Huffington Post and Common Dreams and The Young Turks to right-wing Breitbart, Prager University, Ben Shapiro, Milo Yiannopoulos and even the extreme right-wing Alex Jones’ Info Wars. If it was on the internet, TV or in print, it was up for grabs.

My Discovery: Trump Was the Only One Fighting For Us

After spending half a year researching, turning over every rock, and digging every tunnel, I realized that the only candidate fighting for America was Donald J. Trump.

I realized that the media hated him (and still does) because they are bought and paid for by the globalist elites. There are only 6 corporations that control 90% of the media.

Trump was the only one they couldn’t control — because he didn’t need their money, and they hadn’t ever been able to blackmail him.

Unless you read the Wikileaks emails and watch the hidden camera videos from Project Veritas, it’s hard to know the truth. Because the mainstream media lies to us literally every day.

You have to do the work to find the truth. But as an American, it is your patriotic duty. As they say, “In the age of information, ignorance is a choice.”

In 2017, I even got on a plane and went to CPAC, the biggest annual conservative conference in the country.

I had done the research, but now I wanted to meet the people. My whole life I had been brainwashed to hate Republicans. What if I was wrong?

As I said to my husband at the time, “I want to see the whites of their eyes.”

My dear friend Kimberly got me a press pass and it was the experience of a lifetime.

I hung out in the bar with all the reporters from all the big news outlets.

That guy on the right is one of the big lefty reporters at WaPo.

I forgot his name. Not worth even looking up because all they print is fake news.

I got to meet Judge Jeanine Piro.

I saw lots of people speak, including former member of the European Parliament and BREXIT leader, Nigel Farage, then White House Chife Strategist, Steve Bannon, United States Secretary of Education, Betsy DeVos, and many others.

I even got to see President Trump speak in his first CPAC speech as President.

It was an experience of a lifetime, especially since I was sitting in the press section.

Fascinating to watch the other so-called journalists and how they behaved. Their hatred of President Trump was palpable.

I also attended Politicon two years in a row, which was an absolute blast. If you’re not familiar with Politicon, they invite people from both sides, left and right, and there are great debates.

Sometime in early 2018, I discovered Q and the Q board.

In the spring of 2018, my husband was hacked by an international crime ring, which turned out to be an inside job. The criminals were working with a supervisor on the inside at AT&T. We lost our life savings, including all the money from our house that we had just sold.

I spent the next two years working long hours, scrambling and trying to rebuild my business and my income.

I’ll write a post about that at some point, but I believe my dedication to always telling the truth about the pharmaceutical companies and chemical companies who have been poisoning us for decades caused them to target me and try to destroy us financially.

My blog was censored by Google. I lost 90% of my traffic and income. I was blocked by Pinterest (still am — anything you try to pin from my site gets marked as spam).

Remember, this is how I make a living. I was being silenced and I could not talk about health anymore.

I have never worked so hard in my life trying to salvage what was left of my business.

So, like I said, I had little time to spend on the Q board.

But any extra time I had in the evenings after my children were in bed, I spent researching Q drops and learning about what was really going on.

And the more I read and researched, the more sense it made to me.

When the storm hit in March 2020, I felt it in every fiber of my being.

I knew I had been drafted into General Flynn’s Digital Army.

This is a calling I can’t explain, not even to my husband to this day. But I know I was born to be a part of this time in history.

I just don’t think it’s a coincidence that I was born on the 4th of July. My last name is Michaels, and my patron saint is Saint Michael, who leads the angels in the battle to defeat Satan.

By the way, General Flynn is also named Michael, and he was born on Christmas Eve.

Suffice it to say, there has never been a time like this in history. And I know I’m here for a reason.

I knew the storm was here — and I knew the “COVID 19” scam was just a cover for the storm. I’m not saying the virus wasn’t real… I just don’t think it was anywhere near as serious as they made it out to be.

Initially they said we could expect millions of deaths in the United States.

So in other words, we have only really had about 36,000 deaths nationwide. Was it worth it to shut down our economy for 2 and a half months? And here in Los Angeles, we are still shut down?

Watch this video to get an idea of how microscopically small the number of deaths are and then please tell me how this makes any sense:

Why are we still on lockdown? Here in Los Angeles county, the restaurants are all still closed except for takeout. And everyone is still wearing masks.

This is absolute insanity.  It makes no sense at all… unless, as I said, something else is going on.

What Is Going On?

I think this is a global financial reset. I have many, many reasons to believe this… but having done all the research I have leads me to believe it more and more every day.

For one thing, we’ve known for years that President Trump wants to go back to the Gold Standard.

But beyond that, it is obvious to me that there is no way we could have survived the past few months of this shutdown if we were not in charge. How else could we keep the stock market up and rallying? It doesn’t make sense.

If you spend some time learning about the Federal Reserve Bank, it’s clear that that is one of the main ways the Deep State controls us. When the dollar is not backed by gold, it can be manipulated.

Which means they can create artificial inflation — which means our money is worth less, and we have to work longer and harder to get the same amount of value. It explains why you can never seem to get ahead.

Check out this recent episode from the Santa Surfing YouTube channel (she’s one of my favorite Q Anons) in which she explains what she sees happening right now:

This Is a Massive Coverup, and It Runs Very Deep

At the end of the day, I woke up to the reality of how deep the swamp goes. It’s very, very deep, and it’s worldwide.

I always intuitively knew this. Since I was around 8 years old and saw the movie, “Roots” on TV.

Here’s a video I’ve been watching that explains more about the cabal that rules us, and how they do it:

I Am Compelled to Cover This Story

As a person of integrity, when I find out the truth about something, I feel compelled to share it. I would be doing you an injustice if I knew that this was the root of the problem, and I just went on sharing recipes and talking about food.

If people don’t like what I post, I am fine with that. But I will write about what I feel is important. Feel free to unsubscribe if you don’t want to read it. It is, after all, still a free country. Thank God.

Do Your Own Research

The bottom line is, you have to look into this for yourself. I can’t convince you — there is too much I would need to show you.

Go research for yourself: start on my Q Resources page and check out the steps for beginners at the top. Also, check out my What Is Q / QAnon? post.