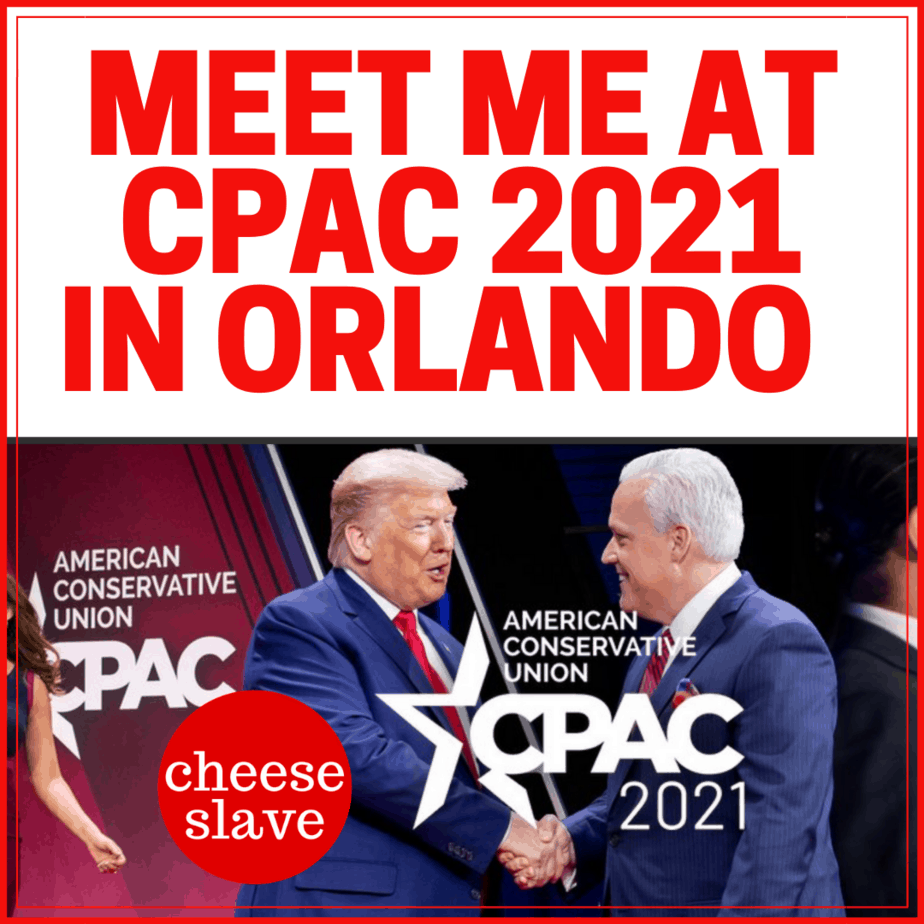 OMG. They changed the location for CPAC 2021, ya’ll! To Florida! OMG OMG OMG!

OK, take a breath. Deep breath. Now I’ll try to explain. OK, so I booked my ticket to CPAC 2021 back in November.

I told my husband this was all I wanted for Christmas this year. And for my birthday. And for Mother’s Day. And now I gotta switch the flight to Orlando.

If you’re not familiar with CPAC, The Conservative Political Action Conference, it is an annual political conference attended by conservative activists and elected officials from around the world.

I went to my first (and only) CPAC in 2017, and I got to hear President Trump speak right after he got elected. You can go read about my experience in this post: Why I’m Writing About Politics These Days.

Anyway, every year CPAC is held in February in Washington, D.C.  I didn’t get to go the past three years because things were so tough financially. My business was almost completely destroyed due to all the censorship from Big Tech.

I really wanted to go in 2021, and so I booked my ticket. But then I was wondering if CPAC was even going to happen in 2021, what with all the craziness happening in D.C.

What Is Going On in Washington D.C.?

I heard there will be 20,000 troops next week for the inauguration. Here are a few tweets about it:

So anyway, I found out last night that CPAC 2021 is still happening Feb 25-28, but they are holding it at the Hyatt Regency in Orlando, Florida.

Go and look at who is on the registration page of the CPAC website. Yep, President Trump.

He’s on this subpage, too.

They don’t list the speakers for CPAC until a few weeks before… but I’m betting Trump will be speaking.

I have no empirical evidence other than those screenshots that Trump will be speaking. I just have a gut feeling. It’s funny because when I booked my flight to CPAC in 2017, he was not listed as a speaker.

It was a few weeks before the event and I was just waking up from 30 years as a liberal Democrat. I wanted to go and see all the conservatives to “see the whites of their eyes”. You can read that whole story here: Why I’m Writing About Politics These Days.

Anyway, I found out later that President Trump would be speaking. Not sure if he will this year, but as he often says, “Let’s see what happens.”

Oh and guess what, CPAC falls on Purim this year. Biblical!

If you haven’t already, head over to my post about Juan O Savin and watch the first two videos: “It’s Going to Be Biblical” & “Patriot’s Purim”. These two videos explain the whole story of Purim.

Q is the 17th letter of the alphabet.

“For if you remain silent at this time, relief and deliverance for the Jews will arise from another place, but you and your father’s family will perish. And who knows but that you have come to royal position for such a time as this?” (Esther 4:14)

I actually bought this wooden plaque on Etsy in 2017 (I know! 17!) and I gave it to my husband as a gift since he was starting a new business. He never hung it up in his office.

Juan O Savin calls this the Patriot’s Purim, but Roseanne Barr calls it the Matriarch’s Purim. Because we moms and grandmas are fighting for our kids and their kids.

I know I was born to be alive right now. I watched so many children get sick and die from vaccines over the past decade.

And because I spoke out about it, the cabal censored me and almost destroyed my blog completely. I never stopped speaking out, though.

I remember the day I met Dr. Andrew Wakefield and he said had no regrets. They destroyed his career and his reputation but he said did everything he did for the children.

Me, too. I’ll never forget that pivotal moment when I knew I couldn’t stop blogging. I had been blogging for a couple years, I guess — about real food and health.

One day, I got a comment on my blog from one of my readers. She said her 3-year-old son had stopped speaking and making eye contact when he was 18 months old, right after the MMR shot.

She said after he was on the GAPS diet (which she read about on my blog) for a few weeks, one day he looked up at her and said, “I love you, Mommy.”

That’s why I don’t regret anything they put me through, and I don’t give a rat’s ass who thinks I’m crazy. I would do it all again.

And yeah, that’s why I started blogging about politics. Because I woke up to the fact that eating unhealthy food wasn’t the reason so many people are getting sick. The real issue is we have psychopathic eugenicists running our healthcare system, and heck, let’s face it, our whole world.

Think I’m being too extreme? I have two words for you: Bill Gates.

I could watch this all day long:

Or how about these three words: World Health Organization.

Read my post on the World Health Organization and their ties to communist China.

So, are you going to meet me there?  This is going to be the experience of a lifetime!

If you decide to go, comment or email me.

They have discounted tickets for seniors, and you can get in free if you volunteer. (At least I think it’s free.)