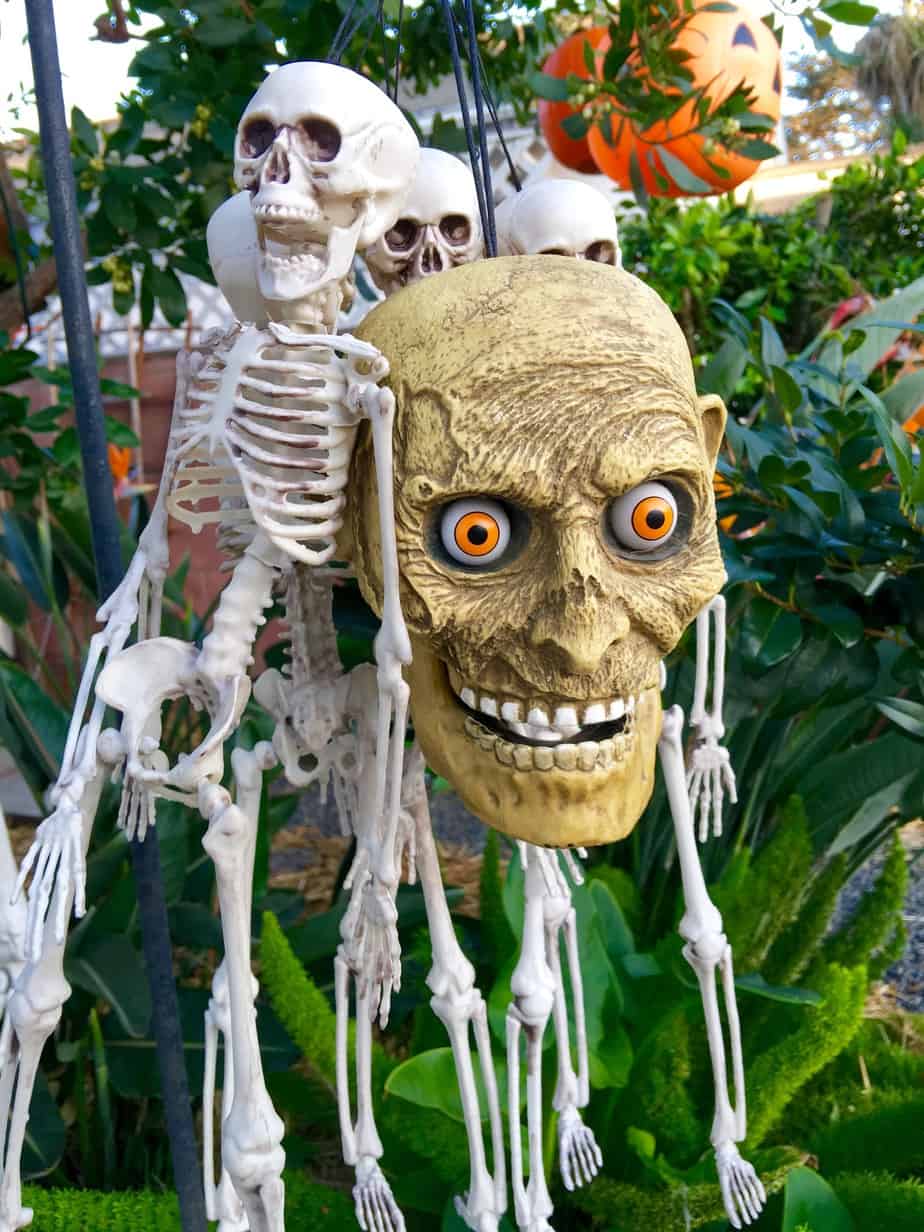 My House at Halloween

Welcome to my house at Halloween! I spent the past couple weeks shopping decorating. I love Halloween; it’s my third favorite holiday (after Christmas and Thanksgiving).

I love Halloween because it kicks off the beginning of the whole holiday season, which spans from now until New Year’s Eve. It’s the beginning of the ending of the year. Three whole months to enjoy our limited time with families and friends, reflecting on the year we are leaving behind, and celebrating what we’ve accomplished and achieved.

Halloween is the perfect start to this period of reflection, because it’s a holiday that celebrates our mortality. We don’t live forever. We’re all going to die. So what are you going to do with your time here on Earth? Better start thinking about it. You never know how long you have left. Time to start planning that European vacation or remodel the kitchen or start learning Japanese.

As Ferris Beuller said, “Life moves pretty fast. If you don’t stop and look around once in a while, you could miss it.”

Here in Los Angeles, the fall doesn’t really come until Halloween. We still get heat waves all through October. It isn’t until Halloween that we start to feel a nip in the air and the rainy season starts. I don’t know about you, but I just can’t enjoy butternut squash soup or pumpkin lattes when it’s hot outside and I’m still in shorts and flip flops.

Some people see Halloween as scary and grim and think about the dark side of death and dying. But I love Halloween because I see it as a fun celebration of possibility. We get to dress up as anything, be anything for a day. It’s fun and playful. And I love to play and have fun.

In fact, as I was decorating the front yard the other day, my 9-year-old daughter said to me, “Mom, you are the most festive person I know.”

One of the best compliments I’ve ever received.

That’s our black cat by the door. Her name is Blackberry.

This is our other cat, Bowie.

And this is my front yard vegetable garden. I just planted kale, broccoli, yellow onions, spinach, carrots, and for my herbal tea, some lemon verbena and mint.

I tried to grow a pumpkin patch, but I had to rip it out since it didn’t produce anything. Our privacy hedges had grown too tall and I didn’t realize the pumpkins weren’t getting enough sun. Next year we will have a pumpkin patch!

I got these styrofoam tombstones on sale last year at Michael’s. They come with little black plastic inserts but I found that they don’t hold up very well even with a tiny amount of wind, so I use chopsticks instead. (Pro tip: don’t jam the chopsticks in too far or else they pop out.)

This is what it looks like at night. The picture really doesn’t do it justice. I wish I could capture how cool it looks.

I bought a lot of orange and purple lights and extension cords and even lit up the hanging plastic pumpkins by putting white string lights inside.

The hanging pumpkins were only $1 at Target. You just put the white string lights inside and then connect the plug to the other lights you have in the tree.

I even got this fancy timer which I still haven’t gotten to work yet. I’m gonna try again today. You can set it to have the lights go on at sunset and off again at sunrise.

This is a ghoul that lights up and makes creepy sounds that I got at Target. Along with some spider webs over my tomato plants (the spider webs were also from Target).

We added biohazard tape to the door to make it extra-creepy.

Those are our pumpkins, which we will carve into jack-o-lanterns, but not until next week, since I guess they get moldy if you carve them too soon. The teal pumpkin is for allergy kids, trick-or-treaters who can’t eat allergens like nuts and gluten and dairy. The teal pumpkin is to let them know that we will have allergy-friendly treats at our house.

I found this zombie head at Target. Isn’t it spooky? It actually talks. If you touch it, it says, “This zombie gig is a dead end job!” and “Wanna take a zombie selfie?”

Speaking of Target, OMG guys, they have the best stuff this year. Well, my local LA Target didn’t have quite as much… but I went last week to the Target in Phoenix (when we were there for the unschooling conference) and you would not believe how much awesome stuff they had (and I went went it was on sale).

You have to go at the right time, I guess. Not too early, because everything is full price. But not too late, because they run out of stuff.

And look, I even found at crow skeleton! (The crow is my spirit animal.)

I seriously have never seen such an awesome spread of Halloween decorations at Target. You should go NOW and snatch up the good stuff before it goes away.

Oh actually look, they have it all on their website. Go, shop! Decorate!

I went to Michael’s too, because they were the only place I could find that had the teal pumpkins. Oh, and the day I went, all the Halloween stuff was on sale, like 50-60% off.

I got some of these styrofoam heads for a few bucks each — we’re going to paint them as a homeschooling craft activity.

By the way, just so you guys know, I am not normally the crafty type. In fact, I’ve never decorated for Halloween before. I’ve always wanted to, especially because my kids are little and it’s fun for them to celebrate holidays.

I was inspired to write this post because of this Halloween House Tour over at The Art of Doing Stuff, one of my favorite blogs. Thank you, Karen, for the inspiration. I’m one of those people who is not at all “crafty” or “handy”.

I’m the kind of person who walks into Michael’s and gets totally overwhelmed. All that stuff to make wreaths. I don’t know how to make a wreath. I don’t even know where to begin. I need inspiration!

So I love The Art of Doing Stuff because Karen makes me believe that I might actually be able to do stuff.

And look! It worked! I did it!

Did I mention that Karen of The Art of Doing Stuff made wreaths out of bones? Real bones.

Yeah, she did. And that’s cool. Anyone who makes wreaths out of chicken and turkey bones is a very cool person in my book.

Maybe I’ll save up some of my bones and do that next year.

PS: I still have a few things to add. I got a blue light on Amazon and some creepy looking lanterns that should arrive any day now. Oh, and I didn’t even mention the fog machine. I’ll set that up closer to Halloween.